The latest and most important Technology in Vehicles news - Page 5.

Tesla's exciting new Cybertruck has dominated headlines and social feeds since its announcement, and while Tesla Motors founder and CEO Elon Musk has been spotted driving the Cybertruck on the streets of LA before, he's back again -- and this time, with Jay Leno.

Leno is no stranger to Tesla exclusives, with the former late night host tapping previous Tesla prototypes in the past -- including their next-gen Roadster prototype. We should expect to see much more on Tesla's new Cybertruck in an upcoming episode of Jay Leno's Garage where we'll see the car in much more detail.

Boeing has taken to its website to announce that it has completed its first test of the world's largest twin-engine jet. 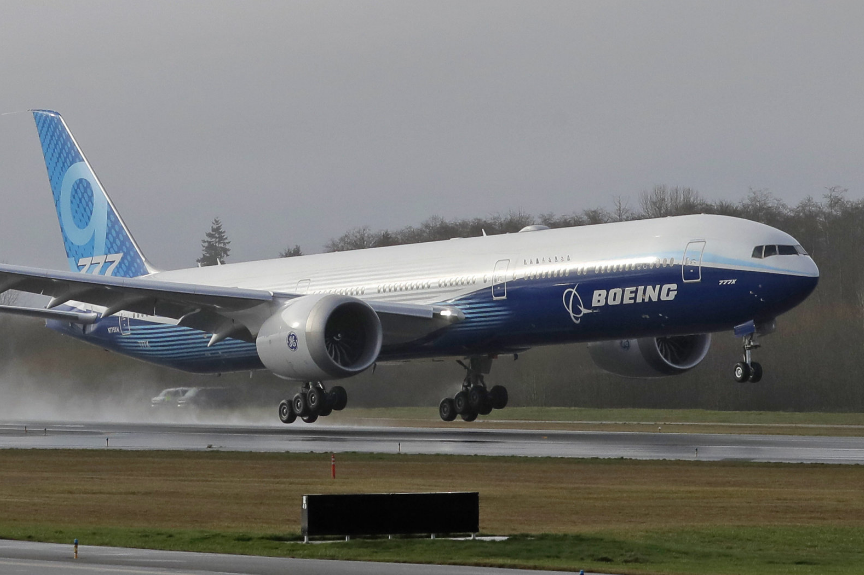 In the press release, Boeing has detailed that the new Boeing 777X jetliner has successfully entered the next phase of testing. The jetliner took off from Paine Field in Everett, Washington, at 10:09 a.m and managed to be in the skies for a massive 51-minute flight before landing back down safely at Seattle's Boeing Field.

The 777X is the largest twin-jetliner every created, measuring in at roughly 252 feet in length and 235 feet across. According to Stan Deal, president and CEO of Boeing Commercial Airplanes, "Our Boeing team has taken the most successful twin-aisle jet of all time and made it even more efficient, more capable and more comfortable for all. Today's safe first flight of the 777X is a tribute to the years of hard work and dedication from our teammates, our suppliers and our community partners in Washington state and across the globe."

U.S. Congressman has called out Tesla regarding the automotive company's "Autopilot" feature, asking them to "re-brand and re-market." 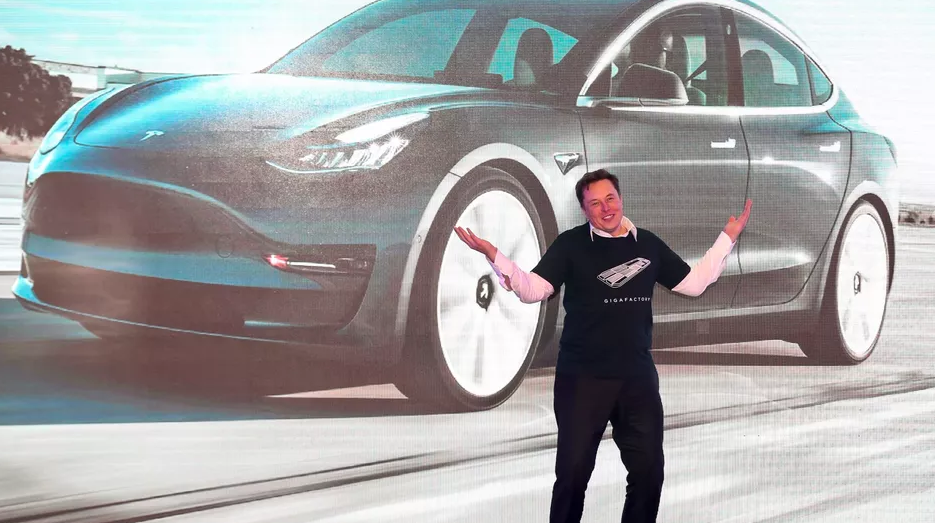 U.S. Senator Edward Markey said in a statement that the "Autopilot" feature is incorrectly named and is, in fact, a misleading title. Markey also stated that "Tesla promotes confusion about the capabilities and limits of its driver assistance system with an inherently misleading name - 'Autopilot' - that encourages users to over-rely on the technology." Markey also went further and said that the "Autopilot" branding "significantly undermines all of the user manuals and subsequent instructions that Tesla issues to its customers" regarding that the vehicle is, in fact, not fully autonomous.

In the statement from Markey, the Senator suggested that Tesla decides to "re-brand and re-market" the feature so that customers are fully aware of what its capable of. This isn't the first time Markey has recommended Tesla fix some of their safety features, as the Senator asked the company back in November to address some issues. Tesla responded to the Senator back on December 20th, 2019.

Tesla is preparing some of the first updates to its electric vehicles for the year, with a new leak hitting Tesla researcher 'Greentheonly' tweeting out a bunch of changes coming to Tesla EVs.

As you can see we can expect new hardware, an integrated inductive phone charger (Qi wireless) for Tesla Model S and Model X vehicles, 2 new battery types for the Model S/X, new lumbar, new charge port types (USB-C, hopefully), new suspension, and more. Most of this makes sense, and should be news welcomed by Tesla fans and customers.

Tesla's last change to the exterior of the Model S was all the way back in 2016, so we should expect a fresh of the Model S in 2020 with some new internals and 2020 features like Qi wireless charging, new ports, and more.

Elon Musk has taken to his personal Twitter account to ask the public about their thoughts on whether or not he should bring Minecraft, The Witcher, and Kerbal Space Program over to Tesla's.

Musk put out a Twitter poll that currently has five hours left as of writing this post, which asked "Want to play The Witcher game on your Tesla? (you can already watch the show on Tesla Netflix theater)". The poll has two options, "yes [tosses coin]" and "no, I have the plague". Before I tell you what the statistics are looking like, vote first!

At the time of writing this 85.4% of the people that voted clicked yes, and only 14.6% voted no. In the Twitter thread, Musk was asked by some fans if he can bring both Minecraft and a SpaceX version of Kerbal Space Program over to Tesla's as well. Musk responded to the fan that asked about Minecraft, "Agreed, v important" and to a SpaceX version of Kerbal Space Program "It's on the list". Hopefully, in the future, we see all three of these games make their way over to Tesla's.

A few days ago reports began surfacing regarding Tesla's vehicles and random unintended acceleration. This eventuated into a petition that could result in Tesla recalling 500,000 vehicles. 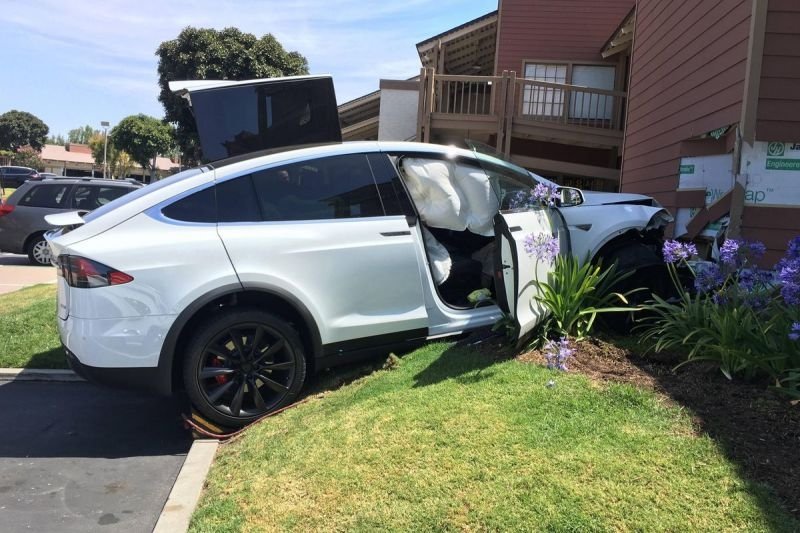 An investigation is currently being conducted by the US National Highway Traffic Safety Administration (NHTSA) in regards to a petition that claims Tesla's cars are suddenly unintentionally accelerating. The reports are claiming that multiple Tesla's are effected by this issue, example cars are as follows; Model S produced between 2012 and 2019, Model X produced between 2016 and 2019 and Model 3 produced between 2018 and 2019.

At the moment the petition says that 127 consumers have made complaints about this issue. The petition also says that these unintended sudden accelerations could have been a contributing factor in 110 crashes and 52 injuries. Since the petition is being investigated by the NHTSA, Tesla has responded to the claims, saying "This petition is completely false and was brought by a Tesla short-seller. We investigate every single incident where the driver alleges to us that their vehicle accelerated contrary to their input, and in every case where we had the vehicle's data, we confirmed that the car operated as designed".

The constant string of updates to Tesla's just keep coming and coming. Elon Musk, the Tesla founder and C.E.O. isn't slowing down with the updates either, as he has just teased what's in the pipeline for Tesla owners.

In a new video posted to Elon Musk's official Twitter account, we can see two people driving a Tesla out of a car park. While this might just seem like a boring video, if you play it with sound, you can hear something unique. As the car is driving past some pedestrians, it says "Well, don't just stand there staring hop in!". Musk has just officially teased that Tesla's will be able to speak to pedestrians with external speakers, just like K.I.T.T. from Night Rider.

Musk didn't explain the extent of Tesla's speech capabilities, or what specific Tesla models will be able to use this new feature. But he did tease that Tesla owners who have the vehicle that supports this update will be able to 'fart' in the general direction of pedestrians. This new feature could be handy if owners are able to use external speakers as a means of communicating safety with people outside the car. At the moment, its unclear whether the 'speech' will be canned clips (pre-installed voice lines) or if owners will be able to use the external speakers as a microphone. 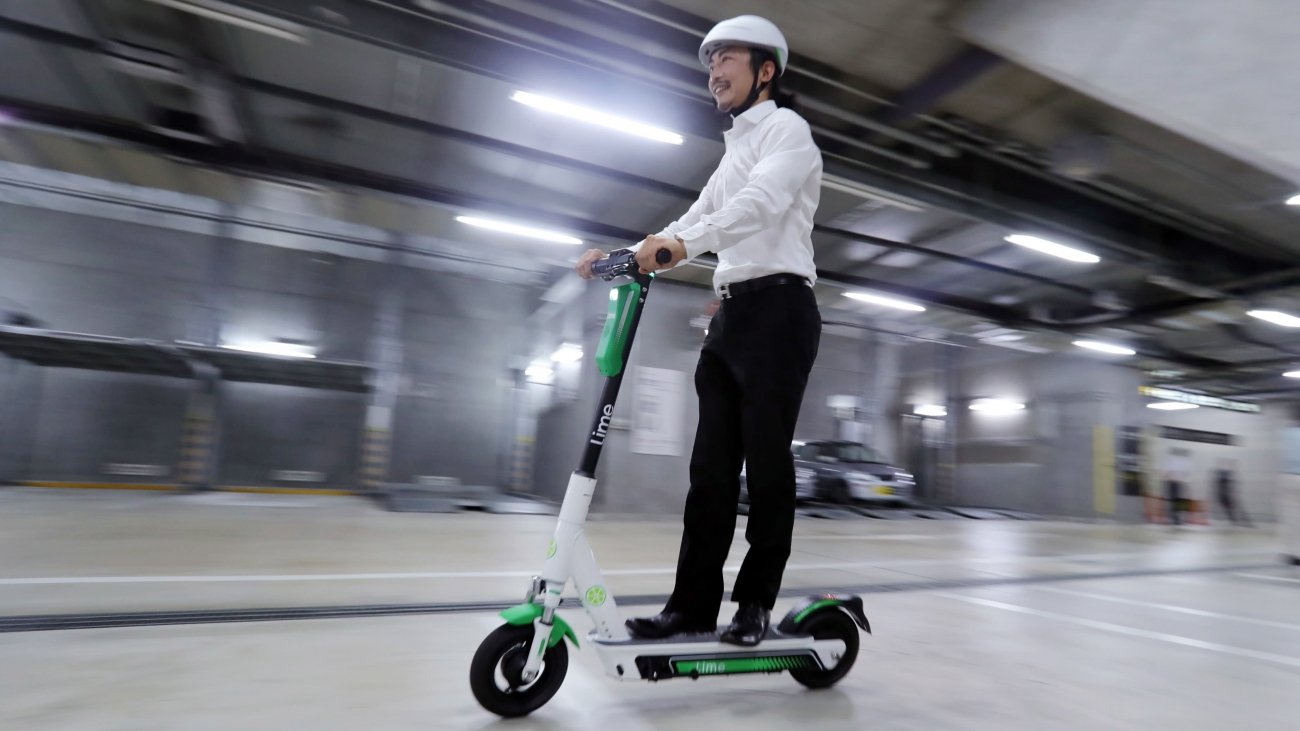 Out of those 39,000 people who were injured, 3,300 people were hospitalised, which is a massive 365% increase. So what age were the people that were injured? As you would of expected 18 - 34 year olds were the main victims. Shockingly, almost a third of the injuries were head related.

CES 2020 - Kioxia America showcased new automotive storage tech during CES 2020 at their suite at the LINQ in Las Vegas, Nevada. Automotive storage may be new to some of you. Still, there is quite a large market for it as cars become smarter, and data becomes far more critical, storage like we wills ee below will continue to evolve. 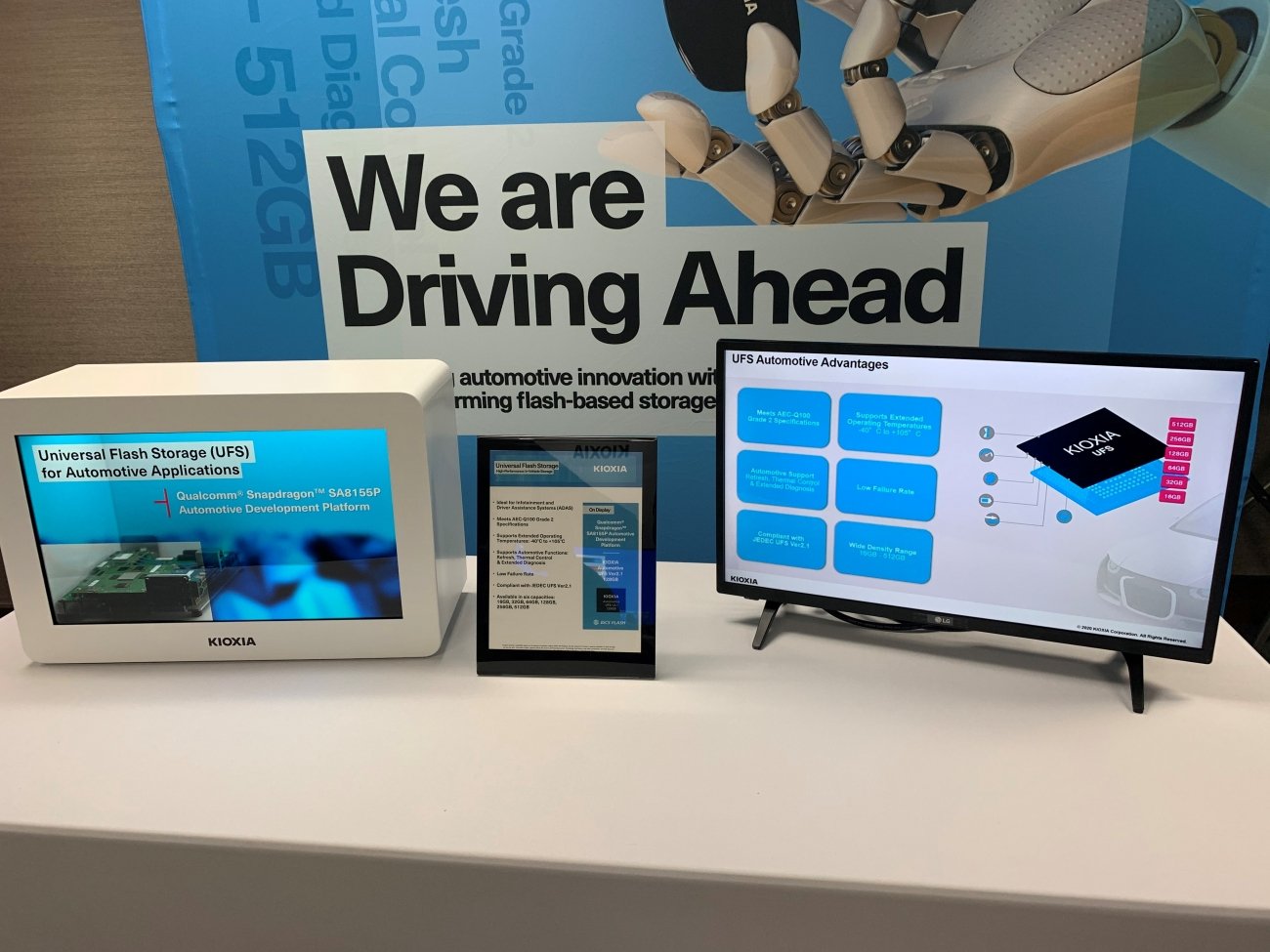 On display, Kioxia had a Qualcomm Snapdragon SA8155P automotive development platform on-site to showcase the newest UFS flash, which KIOXIA is working on for automotive applications.

The UFS that KIOXIA will offer presently ranges in capacities from 16GB up to 512GB to ensure no matter the use case, there should be a solution available for the automotive needs of the manufacturer.

Sony has its own electric car? Yes, and it's called the Vision-S

CES 2020 - Does Sony make cars? Yes, apparently, they do. During CES today, Sony unveiled its electric called the Vision-S. 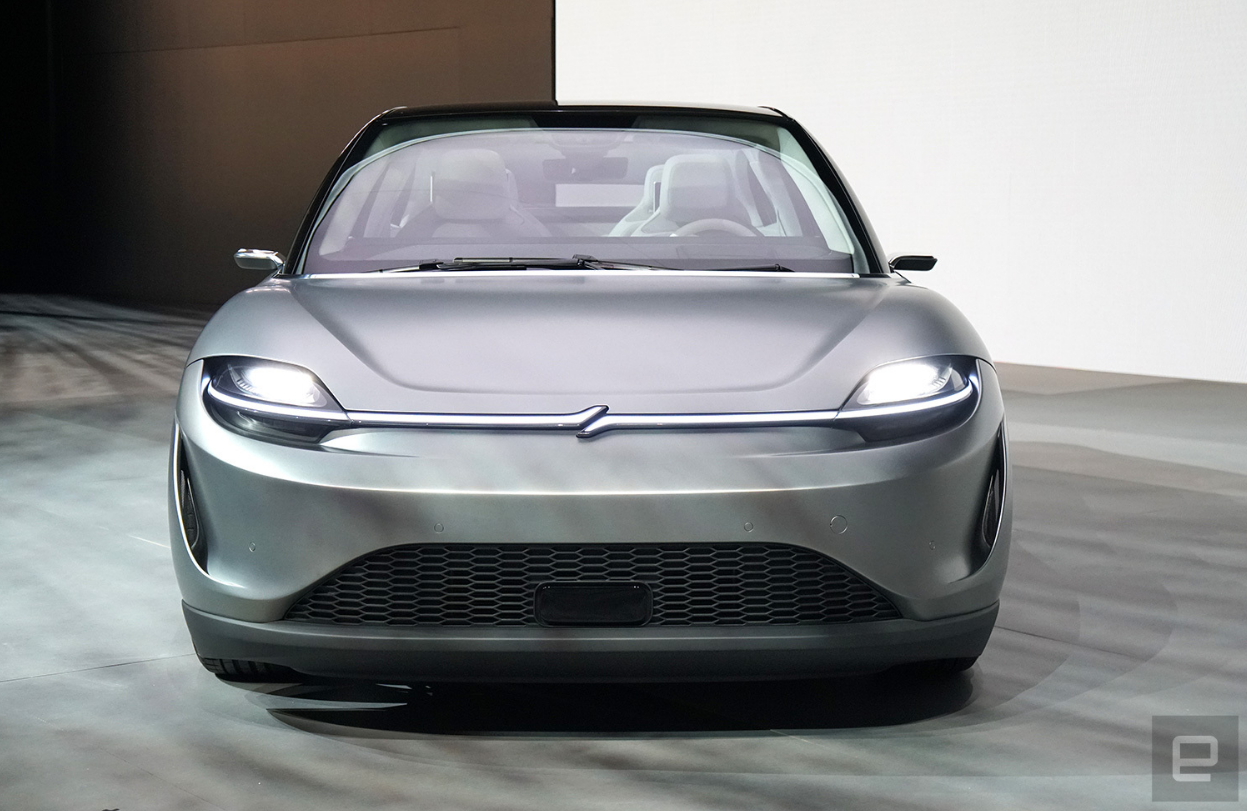 According to what Sony was saying throughout its press event, the Vision-S is built to showcase what a new level of automotive technologies can offer consumers. Sony wasn't alone in this project either; other large companies lent their technological hand to Sony, those company's were; Bosch, Continental, NVIDIA, and Qualcomm.

The car is equipped with 33 sensors that are located around the interior and exterior of the vehicle. These sensors power Sony's extremely high-end road sensing, object, and color detection. The car also comes with Solid State LiDAR, which is used for day and night time vision object detection. The Solid State LiDAR also can sense distance and velocity.

Continue reading: Sony has its own electric car? Yes, and it's called the Vision-S (full post)