Salon is one of the first digital media publications in the world to move to mining cryptocurrency from users' PCs, a massive shift from the norm of traditional online ads. 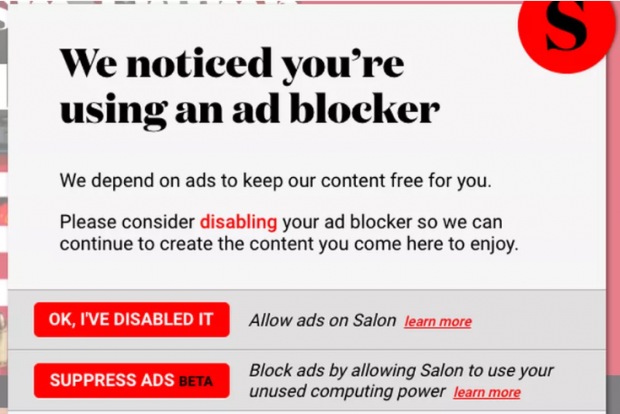 The site wants to provide free content to its users, but like TweakTown and most other websites that rely on advertisements to be run on their site, the company is struggling with a constantly shifting advertising landscape. Salon said that digital ad revenue has dropped $40 billion between 1999 and 2010, with Salon adopting new ways of making money from users without slapping ads all over the place.

Salon will be asking users that are using ad blockers if they wouldn't mind disabling their ad blocker so Salon can make money from the on-screen ads, or they can 'suppress ads' by allowing your ad blocker, but mining cryptocurrency on unused computing power.

Salon says that it will be making money by selling "a small percentage of [users'] spare processing power to contribute to the advancement of technological discovery, evolution and innovation". We should expect that Salon will be using CoinHive to make money, where users' PCs will be mining Monero for Salon.

The company wrote on its blog: "The demand for computing power across many different industries and applications is potentially very high. We intend to use a small percentage of your spare processing power to contribute to the advancement of technological discovery, evolution and innovation. For our beta program, we'll start by applying your processing power to help support the evolution and growth of blockchain technology and cryptocurrencies".

Salon will be adopting some tricks to using users' PC power, explaining: "We automatically detect your current processing usage and assign a portion of what you are not using to this process. Should you begin a process that requires more of your computer's resources, we automatically reduce the amount we are using for calculations".