Nintendo's new Switch handheld-console hybrid might only have a total of fourteen games when it launches on March 3, 2017 (half of them being Japanese), but Nintendo President Tatsumi Kimishima wasn't kidding when he said the Switch would have a "full software library." 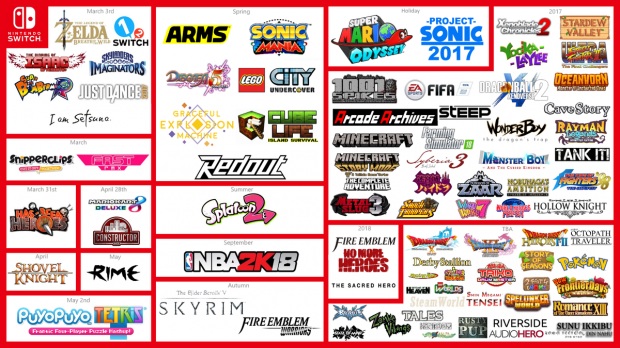 We've seen lots of lists of confirmed Nintendo Switch games, but sometimes a visual aid is needed to truly underline the scope of the hybrid console's software library. Nintendo America President Reggie Fils-Aime has confirmed that "over 50 developers are working on more than 80 games for the Switch," many of which haven't been announced. But when we take a look at all the confirmed announced titles, it certainly adds much-needed perspective to the Nintendo Switch's games lineup.

The above visual aid was crafted by Twitter user Dystify, and if you're keen on more Switch news, you should definitely give them a follow. It's also interesting to note that publisher and developers are revealing even more Switch launch games as time goes by, so this list could continue to grow. For example, Square Enix today announced that I Am Setsuna would be a day one Switch game. So by no means are online lists like IGN's Switch games lineup list 100% complete.

This visual aid certainly reflects affirmations made by Nintendo America President Reggie Fils-Aime, who said that the Switch will have a "steady pacing of content."

"Launch day is not the be-all and the end-all," Nintendo of America President Reggie Fils-Aime said in a recent interview with CNET.

"It really is the steady pacing of content that continually reinforces for the people who bought into the platform why they made a smart choice, as well as what compels people who might be sitting on the sidelines to jump in."

"We feel we have this great ongoing march of content to motivate you to jump into the platform," the Nintendo President affirmed.

In fact, my original video on putting the Nintendo Switch launch games lineup into perspective isn't totally accurate now that publishers and devs have locked in release dates and other info, so expect to see even more games added to the lineup.

Take a look at the full list of the Switch's confirmed third-party partners to get an idea of what to expect from the Nintendo Switch's games.

The Nintendo Switch launches on March 3, 2017 for $299. Check below for a complete catalog of everything we know about the console so far.