The latest and most important IT/Datacenter & Super Computing news - Page 7.

Intel is refreshing their datacenter SSD line with new models that deliver faster write performance than their predecessors. The Intel DC S3710 Series provides 25% more write performance, topping out at 45,000 random write IOPS for the 1.2TB model. The DC S3710 SSDs come in capacities of 200, 400, 800, and 1.2TB. Random read performance weighs in at 85,000 IOPS, and sequential read weighs in at 550MB/s. Sequential writes vary by capacity points, reaching a top speed of 520MB/s. The DC S3710 is geared for high-performance computing, high data rate analytics, operational databases, and large-scale virtualization. 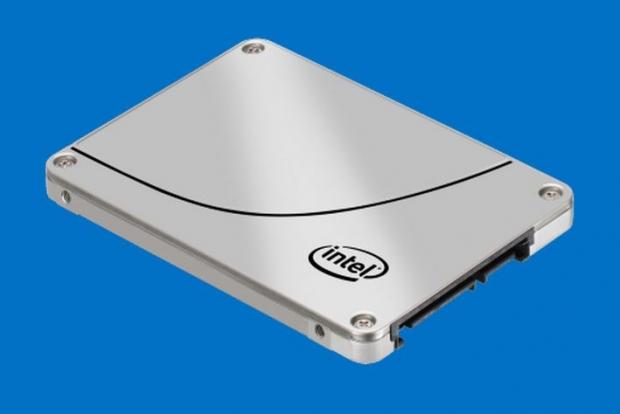 The Intel DC S3610 Series addresses the exploding mid-level performance tier, while offering faster random write speed with an economical price point. The DC S3610 comes in wide range of capacities, with 200, 400, 480, 800GB, and 1.2TB models in the 2.5" form factor. Random read tops out at 84,000 IOPS, and varying write performance (based upon capacity) reaches up to 28,000 IOPS. Sequential read comes in at 550MB/s, and sequential write performance reaches 520MB/s (depending upon capacity). The DC S3610 series also offers capacities of 200, 400, and 800GB in the incredibly small 1.8" form factor, but performance specifications for the 1.8" haven't been released as of yet.

Greenliant is introducing their new G7100 Series G-card, a high-capacity NVMe SSD that leverages an array of NANDrive SSDs in a PCIe form factor. Each NANDrive is it's own entity with its own embedded controller and ECC capability. This creates a scalable architecture that offers up to 2.75TB of storage. 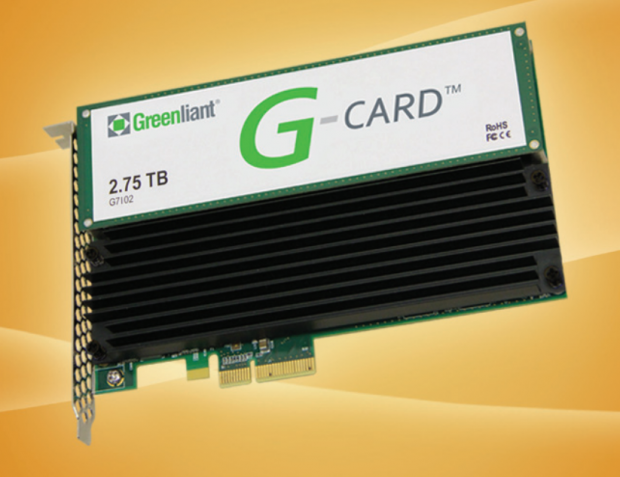 The use of a distributed architecture provides built-in RAID functionality, which increases speed and improves reliability. Greenliant claims the new card offers an Uncorrectable Bit Error Rate (UBER) of 1 sector per 10E28, which is orders of magnitude higher than competing solutions. The G-card also features host power loss protection, and utilizes standard MLC NAND to deliver 10 Drive Writes Per Day (DWPD) of endurance. Speeds and feeds indicate the G-card won't set any performance records, but is geared more for reliability and an economical price point. The G-Card features 875 MB/s of sequential read speed, and 850 MB/s for sequential write. Random 4k reads weigh in at 130,000 IOPS, and random writes are 60,000 IOPS.

CES 2015 -Samsung had several enterprise SSDs on display in their meeting rooms, highlighting the wide range of storage options they provide. Samsung has all the connectivity bases covered for SATA, SAS, and PCIe. 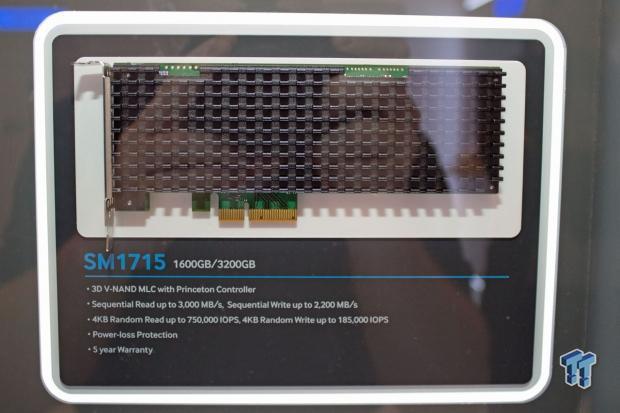 NVMe SSDs always attracts my immediate attention. NVMe is a hot topic, as outlined in our Defining NVMe Article. Pairing the refined and efficient interface with exciting new NAND technologies is exciting, and the SM1715 comes with massive capacities of 1.6 and 3.2TB. The SM1715 comes in the familiar HHHL form factor, and cramming all of that capacity into such a small space is made possible by Samsung's 3D V-NAND. Readers can find deeper analysis of V-NAND in The V-NAND Paradigm Shift Whitepaper. The SM1715's obligatory feeds and speeds are 750,000/185,000 random read/write IOPS and a sequential read/write speed of 3,000/2,200 MB/s, but NVMe advantages of reduced CPU overhead, in-box driver support in leading operating systems, and refined latency performance are also a big attraction. 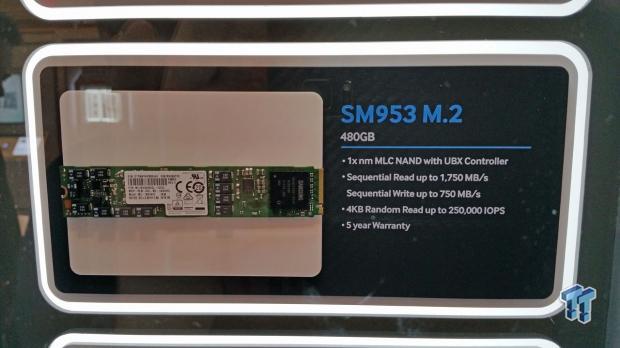 M.2 offers the same NVMe goodness in a slimmer form factor , which is generating incredible interest for hyperscale deployments. The Samsung SM953 packs 480GB of 1x nm planar MLC NAND flash, but this inaugural design will likely be augmented with 3D V-NAND in the future. The UBX controller delivers sequential read/write speeds of 1,750/750 MB/s, and random read speed weighs in at 250,000 IOPS. Random write speeds haven't been disclosed as of yet, but the SM953 also features power loss protection. The race is on for the first datacenter-class M.2 SSD to hit the market, and look to these pages soon for an evaluation of the first one to hit our labs.

CES 2015 -Phison is poised to make waves with their new PS5007-E7 controller. This new controller will power enterprise NVMe SSDs in both the M.2 and 2.5" form factors, with the latter sporting the new SFF-8639 connector. The controller will provide plenty of bandwidth with a PCIe 3.0 x4 connection. The new controllers support capacities from 16GB all the way up to 2TB. Sequential reads are rated for 2,800 MB/s, and sequential writes come in at 1,500 MB/s. The controller also features random read/write speeds of 350,000/300,000 IOPS. 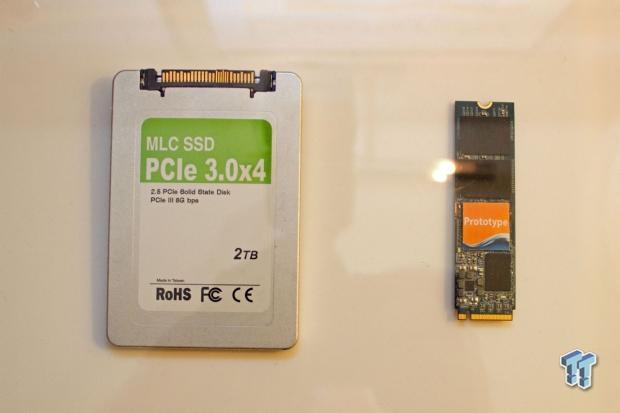 The controller supports both AHCI 1.3 and NVMe 1.1 (covered in our Defining NVMe article). Current designs do not include power capacitors, but power loss protection will be included in the final designs. It is also only rational that an NVMe controller with this type of grunt power will eventually make its way to a standard PCIe form factor product, but we did not receive official confirmation of that possibility. The M.2 form factor is starting to pop up in roadmaps of more manufacturers for enterprise applications, so there is definitely an emerging customer base for these products as well. 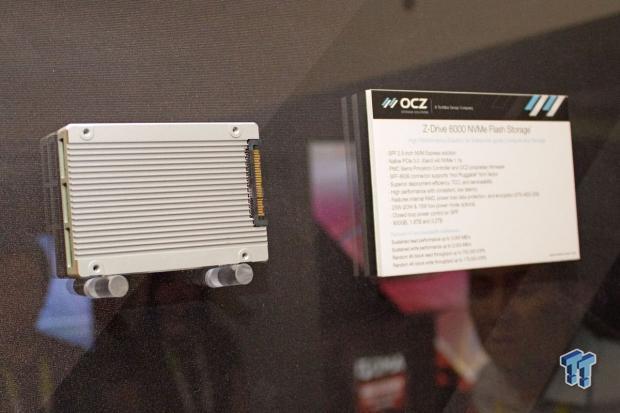 The Z-Drive 6000 comes in capacities of 800GB, 1.6TB and 3.2TB in the small 2.5" 15mm form factor. The Z-Drive leverages the proven PMC-Sierra Princeton controller running OCZ-proprietary firmware. The Z-Drive 6000 is certified for NVMe specification 1.1b on the UNH-IOL integrator list. The drive also features all the normal enterprise trimmings, such as encryption and internal data redundancy.

CES 2015 -Samsung has the advantage, for the time being, of being the only manufacturer shipping 3D NAND products. V-NAND is 3D NAND that achieves better density, performance, endurance, and power consumption, via vertical stacking of the NAND cells and CTF technology. This runs counter to the established norm of increasing density through NAND shrinks, and with good reason. Shrinks provide more density, but actually reduce endurance. 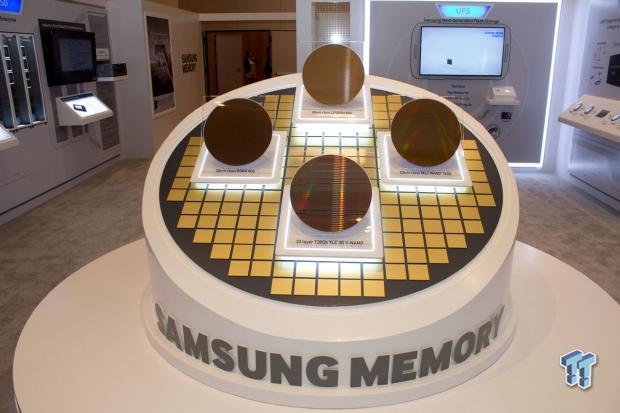 We have a more detailed analysis of V-NAND in The V-NAND Paradigm Shift article. Samsung has the 10nm class MLC NAND 16Gb and the 32-layer 128Gb TLC 3D V-NAND on display. The TLC (or 3bit) versions of V-NAND boost capacity, and also provide increased endurance in comparison to standard planar TLC NAND. Planar TLC has already made its way into the client and enterprise space despite the lower endurance, and 3D TLC V-NAND is on the way to the datacenter as well. 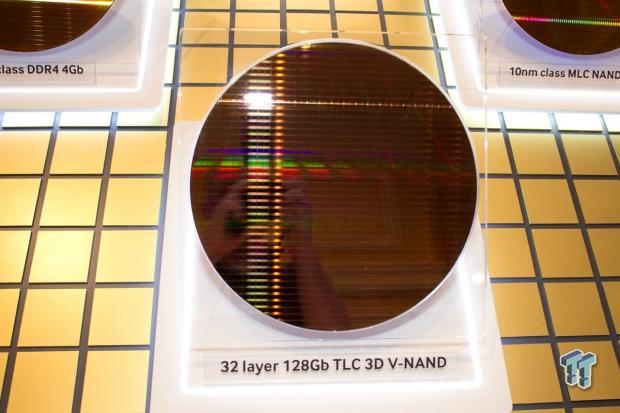 CES 2015 -HDDs are evolving to address new challenges in the datacenter, and the Seagate Kinetic line offers a radical new way of improving performance and reducing TCO. Hyperscale customers are constantly looking for refined systems to lower operating costs, and new data storage methods to address the massive influx of data. 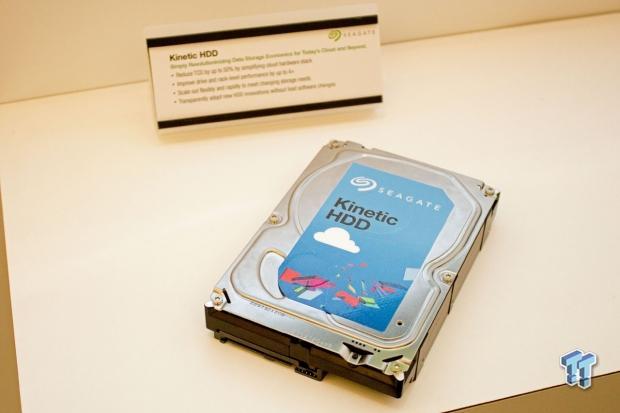 Kinetic drives interact with an open-source Seagate-developed API that eschews the normal filesystem implementations in favor of the more robust Key/Value Object storage. The Kinetic platform also dramatically reduces host overhead and removes CPU processing from the majority of tasks.

Storage Visions 2015 -Mike Chen from Marvell stopped by the TweakTown booth at Storage Visions 2015 to display the Altaplus controller along with a new SSD that has an integrated controller on the NAND package. NVMe has several performance advantages, but also enables low power operation modes particularly well-suited for mobile applications. Marvell is delivering both PCIe 2.0 and 3.0 SSD controllers that feature robust LDPC error correction technology. 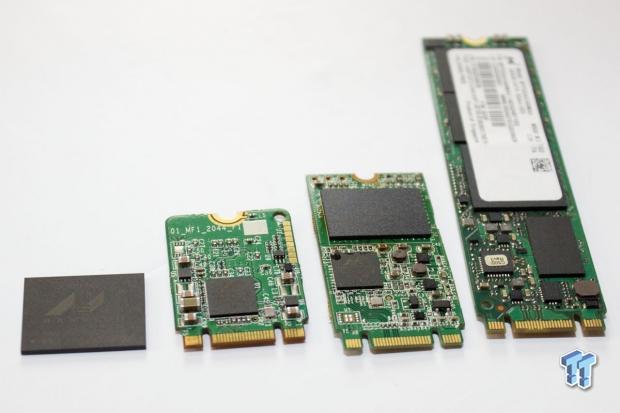 There are multiple lengths in the M.2 standard, and here we can see the difference in size between the different solutions. 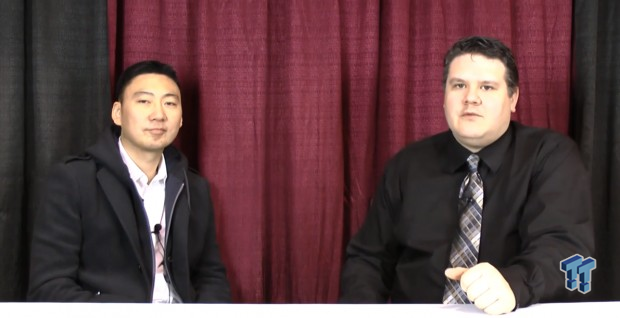 SanDisk works closely with the IT team to ensure that upgrades are successfully migrated in a safe and secure manner. The IT department schedules the machines for pickup, and SanDisk performs the actual data migration and hardware installation to ensure a worry-free transition to a faster, more reliable, and lower cost SSD solution.

Mangstor has a blazing fast enterprise PCIe SSD hiding in plain sight. The MX6000 comes in both HHHL and FHHL form factors, and features 2TB and 2.7TB of eMLC NAND, respectively. With 1 million random read IOPS and 600,000 random write IOPS the MX6000 lays claim to the title of the fastest PCIe SSD in the world. Thee MX6000 also provides protection from host power loss with a unique solution. 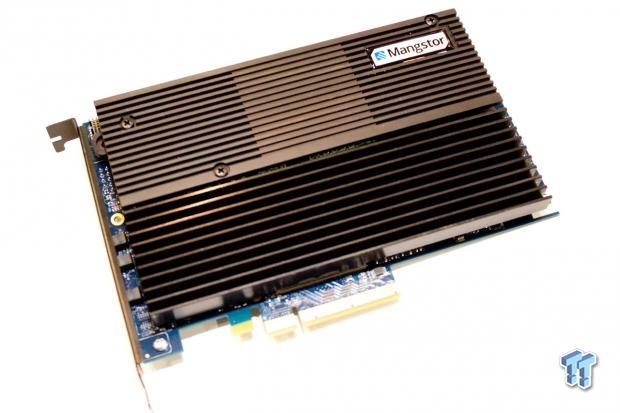 Typical SSDs have a volatile DRAM cache, which requires power-fail circuitry and capacitors to protect the cache. The MX6000 utilizes a next-generation 64MB MRAM cache from Everspin, which provides built-in write persistence for all data, simplifying design and firmware. The MX6000 boasts a beast of an FPGA with 100 cores running at 500MHz to manage the flash. The card utilizes eMLC to provide a robust 8-10 DWPD threshold that will satisfy the most demanding workloads.