Flash Memory Summit 2014 - Avago Technologies recently acquired LSI and their SandForce division, and then scooped up PLX Technology as well. The merger with Avago isn't complete yet, so we couldn't discuss the details of the acquisition with Larry Chisvin, the VP of Strategic Initiatives at PLX Technology. PLX Technology is a right in the middle of the datacenter evolution with the advent of NVMe, and also the need for a new interface for converged server architectures. NVMe is currently a new interface that is still developing to offer multipath and fail-over features which will lean heavily on PCIe switches. 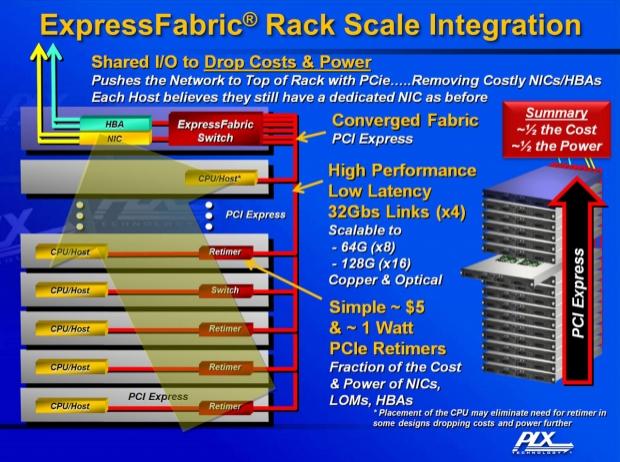 We visited PLX's office and took a tour through the ExpressFabric architecture, which can replace or augment networking infrastructure in the datacenter. The advent of hyperscale and cloud computing has spurred a re-imagination of datacenter architecture. Disruptive technologies and Open Compute initiatives are challenging the old way of thinking and delivering designs purpose-built for optimum efficiency. The emergence of software-defined datacenters (SDDC) and software-designed storage (SDS) requires new designs that allow total control of resource allocation. Using ExpressFabric's PCIe connections as a rack-level interconnect allows for new exciting datacenter designs that will pool server resources in separate chassis for optimum performance.

Integration with Avago will allow for access to a much larger company with a large IP portfolio to accelerate PLX Technology's initiatives.