SanDisk and Dell are announcing the integration of the SanDisk DAS Cache software into the next generation Dell PowerEdge Servers. SSDs feature extreme performance specs, but unfortunately they continue to carry a price premium over hard disk storage. One of the challenges has been to find an easy method to marry the capacity of hard disk drives with the speed of SSDs. SanDisk DAS Cache software boosts hard drive performance by accelerating frequently used data in an SSD cache layer. 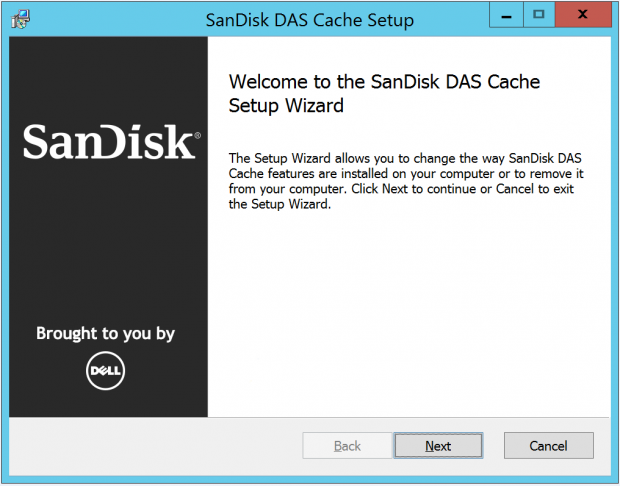 Using flash-based caching techniques can radically alter workload performance in a production environment. The SanDisk DAS Cache software is based off of the popular SanDisk FlashSoft product line. The easy-to-use interface and seamless performance acceleration software is battle tested in thousands of deployments across the world, bringing a level of confidence in the software that allows Dell to offer it as an OEM solution. When users purchase a PowerEdge server with flash and HDD storage they are automatically given the software as a default option.

There are several different approaches to SSD-based caching techniques from a number of players. Many involve hardware-based implementations that typically execute the caching algorithms and functionality on a RAID card connected to both the HDD's and SSDs. This can limit choice and also can bring about vendor lock-in concerns.

SanDisk's DAS Cache solution runs on minimally-intrusive software with very little computational overhead. The software resides in the host operating system. This provides nearly unlimited flexibility in configurations, and customers can use SSDs from any vendor, as well as any type of disk-based DAS solution. The use of a wide range of flash solutions, from standard 2.5" SSDs to PCIe application accelerators, allows administrators to configure up to a whopping 16TB of flash in a single server. Users can also utilize various types of redundancy approaches on the underlying flash, such as mirroring, that extends the amount of managed flash up to 32TB per server. The host system and user manage flash redundancy, which allows for numerous configuration to support high-availability environments.

Users can configure the cache pools to reflect the needs of their environment, including write through and write back options. Another key consideration is that the program is flash-aware, and intelligently analyzes data patterns to avoid caching certain types of low-value data, such as sequential workloads. In many cases these types of workloads are best served by the underlying HDD storage, and passing that workload to the HDD's mitigates undue wear on the SSD's.

The key capabilities and benefits of the SanDisk DAS Cache software include:

� Allows a choice of either write-back and/or write-through caching modes for optimal performance and flexibility - even within the same server;

� Scalable up to 16TB of cache capacity per server to support large data sets;

� Flexibility allows up to four separate cache "pools" on a single server to enable different levels of quality of service (QoS);

� Data protection through hardware or software RAID for SSDs;

� Cache persistence on server restart for ease of administration;

� Support for a broad range of operating systems and hypervisors including Microsoft Windows Hyper-v and Linux.

The net results is workload performance gains in the area of 5x to 11x, depending upon the workload. Dells use of this type of caching solution as an OEM-integrated solution on their servers sends the message that flash is here to stay, and finding the best method of combining the speed of SSDs and the capacity of HDD's just got easier.