Both the Xbox Series X and PlayStation 5 use mysterious custom SSD tech that allows developers unprecedented access to storage data. This kind of freedom might be possible thanks to a derivative of new software-defined flash (SDF) technology.

One thing we need to make clear: Software-defined flash was made specifically for enterprise-level cloud services with huge server farms. We're talking about gigantic scale-out applications like datacenters, telecommunication infrastructures, and financial institutions that require thousands of petabytes of data. It was not made for consumer storage. It's a new datacenter standard aimed at boosting efficiency with thousands of storage drives.

But a lot of the things that both Microsoft and Sony are saying (the crazy I/O speeds that're faster than anything available in PCs today, the granular access to data) somewhat matches up with the tenants of software-defined flash.

So what is software-defined flash, and how could it help next-gen consoles?

In 2014, Baidu, the company that runs China's largest search engine, made a proposal for a new technology that would give total access to the NAND flash storage contained in solid state drives. They called it software-defined flash. Baidu called for a solution that maximized I/O speeds while reducing wear from data-correction and random read/writes.

In their tests, the custom SDF SSDs were able to boost input/output (or the rate in which the drive can read and write data) speeds by up to three-fold.

"Our measurements show that SDF can deliver approximately 95% of the raw flash bandwidth and provide 99% of the flash capacity for user data. SDF increases I/O bandwidth by 300% and reduces per-GB hardware cost by 50% on average compared with the commodity SSD-based system used at Baidu," reads a 2014 study. 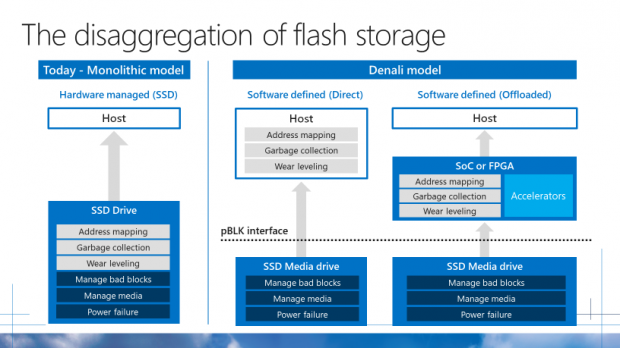 A slide from a Microsoft Azure presentation outlining SDF features.

Software-defined flash essentially opens an SSD's flash memory channels to give software direct access. It's memory that's been unlocked by OEMs to give more flexibility and freedom to the software--in our theoretical case, console operating systems like the custom Windows 10 and Linux solutions powering the PS5 and Xbox Series X.

Thus opened, developers would theoretically be able to use new toolsets (like Microsoft's enhanced DirectX pipeline) to push the hardware to its limits. A major limitation to any game is how fast it can feed textures, assets, and other data into the CPU and then the GPU for transmission to a screen. The speeds would be accelerated by the raw I/O of the SSD itself, but the process could also be accelerated by removing specific barriers.

Here's a simplistic analogy: Think of SFD as a kind of jailbroken phone that can be manipulated in certain ways versus stock phones (in this case representing typical SSDs). Check this out for a more in-depth primer.

Both Microsoft and Sony have touted the speeds of their new SSD tech, and both have confirmed the systems use custom NVMe SSDs. Sony even showed how fast its new PS5 SSD is with a demo, which loaded Spider-Man in 0.8 seconds versus the PS4 HDD's 8.1 seconds. The new storage solutions will supercharge speeds by beaming data more directly to the GPU and CPU for processing, all at high I/O rates.

Mark Cerny, for example, says the PS5's SSD can deliver faster bandwidth than any PC solid state drive currently on the market.

"It has a raw bandwidth that's higher than any available PC SSD," Cerny told Wired. "The raw read speed is important but so are the details of the I/O [input-output] mechanisms and the software stack that we put on top of them."

"Rather than treating games like a big block of data [on PS5], we're allowing finer-grained access to the data," Mark Cerny also said in a recent Wired interview.

"The I/O could be better than anything the PC has ever seen. What Sony has shown is in fact. So we'll see. Interesting time," Ybarra said in the chat of a recent RDX podcast (starts at around 1:30:00).

Sony also confirmed the SSD would be customized, hinting at specialized tech:

"PlayStation 5 is equipped with custom SSD for ultra-high-speed access," Sony confirmed in an October press release.

"The exceptionally-powerful SSD on the PlayStation 5 offers a new level of detail for each individual object as well as seamless loading of our expansive world," Godfall creative director Keith Lee told PlayStation Lifestyle.

"...Our next-generation SSD will virtually eliminate load times and bring players into their gaming worlds faster than ever before," Spencer said in an Xbox Wire post.

"It's really about giving the developers the tools and the capabilities to use the hardware in the most efficient way possible.

"A good example of that is on the storage side. We've basically reached the limit of possible with the traditional rotational drive. We're basically at the upper bounds of the raw performance we can get there," Xbox partner director of program management Jason Ronald told Gamespot.

"So we've invested in NVMe SSDs on the I/O side and we're also giving developers a lot of new capabilities on top of that to try to virtually eliminate load times."

It's possible that these solid state drives have been customized on a hardware level with an adapted or derived form of SFD tech to allow blazing-fast speeds and give developers more direct access to the memory on a system software and toolset level.

If this is the case, it's likely both the PlayStation 5's and Xbox Series X's SSDs are soldered to the motherboard and can't be replaced. It also makes it a tough case for external storage expansion, as any drives you hook up to the consoles won't have the specialized SFD tech.

To alleviate this issue, the systems could use on board cache acceleration technology such as Sony's proprietary ReRAM or a custom 3D Cross-point memory solution designed by Microsoft.

Sony and Microsoft may be taking pieces from their respective cloud storage solutions and putting them into next-gen consoles. ReRAM and 3D Cross-point was specifically made as Storage Class Memory (SCM) for datacenters and cloud operations, not consumer devices.

But that didn't stop Intel from adapting its Optane modules, which are made from its own proprietary 3D Cross-point memory, for consumer use.

It's possible the Xbox Series X and PlayStation 5 will likewise adapt this potent technology to supercharge speeds, open up new doors of access to console hardware synergy, and give developers a massive new level of freedom to wrangle data.

OEMs have been experimenting with software-defined flash for years.

Samsung, who may be making the custom SSDs for Sony's PlayStation 5 console, have multiple software-defined flash solutions including NVMe-based SSDs.

Interestingly enough, Microsoft teamed up with Toshiba and LiteOn to make a new specific SDF solution called Denali. The SSD is a dual-layer solution built with software-defined flash on a FF1u form-factor for cloud-based datacenters.

"Microsoft partnered with Scenic Labs, LightOn and Toshiba to build what we saw as the first building block to understand how to deploy and use this technology," said Michael Cornwell, general manager of storage technologies at Microsoft's Azure branch in an Open Compute Platform presentation from March 2019.

Remember that nothing has been confirmed, and everything here is more speculation than anything. It's possible we're completely wrong and both the PlayStation 5 and Xbox Series X don't use software-defined flash, or any cache acceleration module. But based on what we've heard and uncovered so far, it's hard to think the consoles won't have some really unique storage hardware within their respective boxes.