The latest and most important Audio, Sound & Speakers news - Page 4.

Sennheiser has showcased some sleek, and affordable headphones at CES 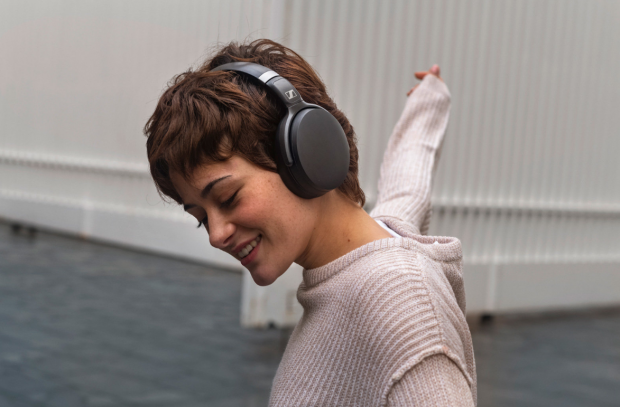 The two new headphones are the HD 350BT and the noise cancelling version the HD 450BT. Both models are Bluetooth 5.0 ready and offer 30 hours of pleasurable listening. When the battery gets low and you need to charge them up quickly, the USB-C fast charger will be your best-friend.

They also come with a dedicated voice assistant button. So how much are we looking at for Sennheisers new headphones? Surprisingly not that much. The 350BT comes in at $130 and the $220 for the 450BT. Sennheiser has said that they will begin shipping the 350BT in mid Janaury and plan to roll out the 450BT sometime in mid February.

CES 2020 - JBL has unveiled their new earbuds which are directly aimed at Apple's AirPods, are they worth it though? 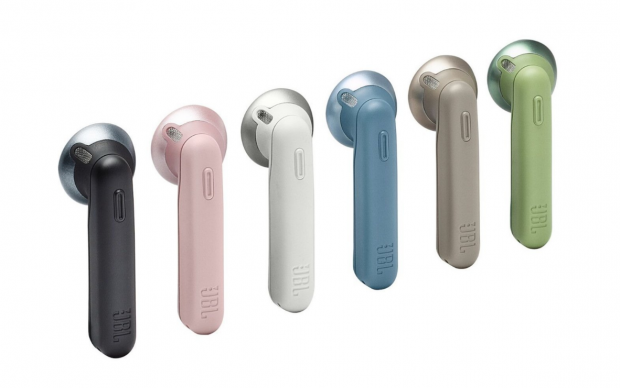 JBL has revealed at this year's CES its new line of wireless earbuds that seem to be directly aimed at Apple AirPods. JBL has shown off the TUNE 220TWS in a variety of different colors, they have a sleek design and will last for about three hours on a charge. The charging case comes with an additional sixteen hours of battery, and the earbuds are priced at just $100.

JBL hasn't stopped there, though. The other new higher-end model is the LIVE 300TWS, which is quite a big step up in the features department when compared to the TUNE 220TWS. The 300TWS comes with a higher level of water resistance, JBL's TalkThru mode (lowers phone audio when people are talking to you, so you don't have to take out your earbuds), and AmbientAware which lets you hear sounds around you. The 300TWS model has about four hours of charge, and the case comes with fourteen hours of additional charge. The 300TWS is priced at $150.

The JBL Bar 9.1 is a Dolby Atmos soundbar that has wireless speakers

CES 2020 - JBL has just unveiled its first Dobly Atmos compatible soundbar, the fun doesn't stop there though, as it has detachable speakers. 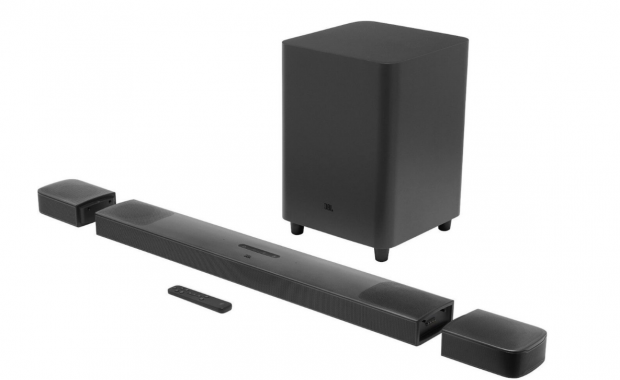 JBL has just introduced to the public its first Dobly Atmos-compatible soundbar dubbed the JBL Bar 9.1. The JBL Bar 9.1 comes with four Dolby Atmos drivers that vertically project sound to the roof and bounce the audio around the room, creating more immersion.

The soundbar also comes with two removable speakers that can be placed around the room at the users' leisure. These speakers are designed for any setup, the bar itself chargers the wireless speakers, and they will run for about 10 hours playback. The subwoofer seen above is 10-inches tall, and the entire system is 820 watts. For convenience purposes, JBL has also equipped the soundbar with built-in Chromecast, AirPlay 2, and Bluetooth support. This spring, the JBL Bar 9.1 will be going on sale for $100.

Continue reading: The JBL Bar 9.1 is a Dolby Atmos soundbar that has wireless speakers (full post)

JBL cannonballs into the gaming headset with 7 glorious headsets

CES 2020 - JBL isn't just stepping into the gaming headset market, they are cannonballing with the new Quantum lineup announced at CES. 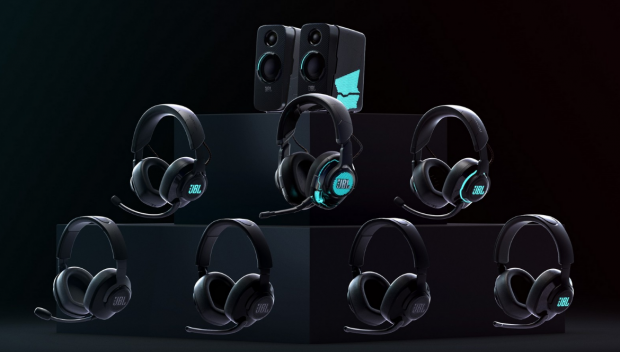 JBL has just announced a new line of gaming headsets that are more than special. JBL will be offering consumers a massive price range to choose from, seven separate headsets that start at the $40 mark, and range all the way up to the flagship model priced at $300. JBL has also developed it's very own 7.1 virtualized surround sound and head tracking technology that is integrated into the $80 Quantum 300 and above models.

Are you wondering about wireless? Sure. JBL has wireless support with the $149 Quantum 600 and $199 Quantum 800. The highest-end model, Quantum One, comes equipped with the company's 360-degree sound technology that allows users to turn their heads and experience more realistic sound. Typically in a virtual surround sound headset, the speakers inside the headset track the ears and not users head. With JBL's 360-degree sound technology, users will be able to turn their heads and follow specific sounds. 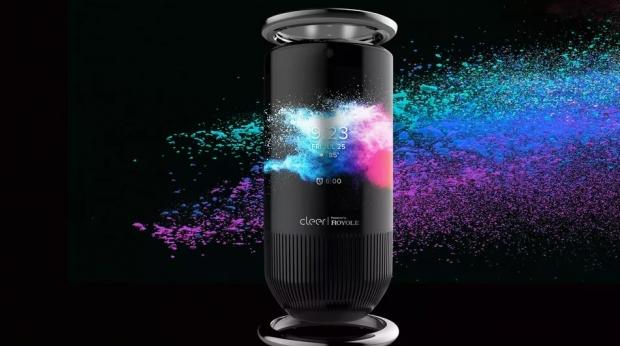 JBL has just announced an interesting and tech-fueled pair of wireless headphones in the new Reflect Eternal, a new pair of over-ear headphones that are being crowdfunded, offering "virtually unlimited" listening.

Inside, JBL is tapping Powerfoyle material from Exeger which is capable of sucking in energy from the sun, and indirect and indoor light. This means that if you're under a source of light, you will be receiving charge to your new JBL Reflect Eternal headphones -- while you'll have up to 68 hours of listening time with a fully-charged headset when you're in darkness.

You can also plug the headphones into power with JBL saying 15 minutes of charge time will give you up to two hours of playback time. The headphones feature 40mm drivers with 20Hz to 20kHz frequency, hands-free calling, ambient audio amplification, multi-device pairing, and a voice assistant. They can even get a little wet, with JBL packing in IPX4 rated water resistance.

Pringles made a gaming headset... that feeds you chips

I didn't think I'd ever be writing about a gaming headset that feeds you mid-game, but it's the end of the decade and Pringles is feeling peckish, and experimental with its strange-but-cool Pringles Headset Hunger Hammer.

Pringles went out and 3D printed a bunch of components, strapped them to a Razer gaming headset -- and voila, a self-feeding gaming headset is born. The headset packs a motorized arm on the side that has a Pringles chip dispensed onto it, slowly positioned to go in front of your mouth -- waiting for you to chomp it down.

The chip maker (and not that type of chip, but the edible kind) thought it would be clever to team up with some Twitch streamers for a Pringles promotional tie-in with Gears 5. The new Hunger Hammer isn't going to be some product that will debut, and more of a fun marketing stunt for Pringles -- so don't blame me if you can't find this headset online, but maybe Fry's Electronics might have some.

Continue reading: Pringles made a gaming headset... that feeds you chips (full post)

Awhile ago rumors were circling around that Apple were planning on releasing a second variant of the popular AirPods, the AirPods Pro. 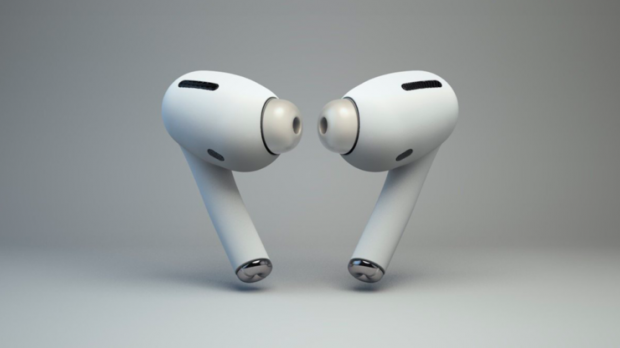 Obviously, if Apple was to release the AirPods Pro they would arrive with a more hefty price tag, but what about color options? A new report out of Economic News Daily claims that Apple is actually in the process of developing the AirPods Pro but not just in one color option, but eight.

These color options would coincide with the new iPhone 11, iPhone 11 Pro and iPhone 11 Pro Max color themes. The report also talks about the rumored specs for the AirProds Pro, and according to the report the new version of the pods will come with noise cancellation. How much would these AirPods Pro cost and when would they release? Rumors say that they could cost $260 and that they would release before the holiday season arrives.

Spotify is back at it again with another giveaway, this time round they will be handing out free Google Home Minis to all new and old Spotify Premium subscribers.

Spotify has said that these giveaways will only be occuring to Premium subscribers in the United States and will only happen "while supplies last". It seems that as Google is gearing up for the release of the Nest Mini, they have selected Spotify to clear out the 'old stock' of the previous generation. But who doesn't like free stuff right?

The partnership between Google and Spotify to get more smart home devices out into the public is certainly a beneficiary idea, as both companies are working towards accessibility in the fashion of getting users the music they want when they want it. As Assistants progress in technology and become even better, more users will be more inclined to purchase a smart home system. Especially if Spotify and other music streaming applications are abundantly producing reliably good music. All Spotify and Google are doing is getting out ahead of the curve.

Continue reading: Spotify is giving out Google Home Minis to any Premium US subscriber (full post)

Corsair has just announced the latest members of its VOID gaming headset family, with the new VOID ELITE and HS PRO series of gaming headsets.

First up we have Corsair's new VOID ELITE gaming headset which has all of the bells and whistles, with Corsair cramming in improved audio, a redesigned Discord-certified omnidirectional microphone, dynamic RGB lighting, low-latency wireless technology, and custom-tuned 50mm neodymium audio drives with an expanded frequency range that sits between 20Hz and 30,000Hz.

Corsair has designed the new VOID ELITE gaming headset from the ground up to provide the best audio quality it can, as well as immersive 7.1 surround sound that will throw you into the middle of the battle field... and hopefully get you some of those delicious wins in your favorite game.