The latest and most important RAM news - Page 4. 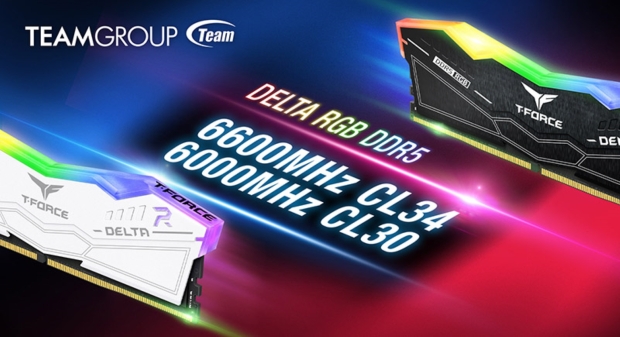 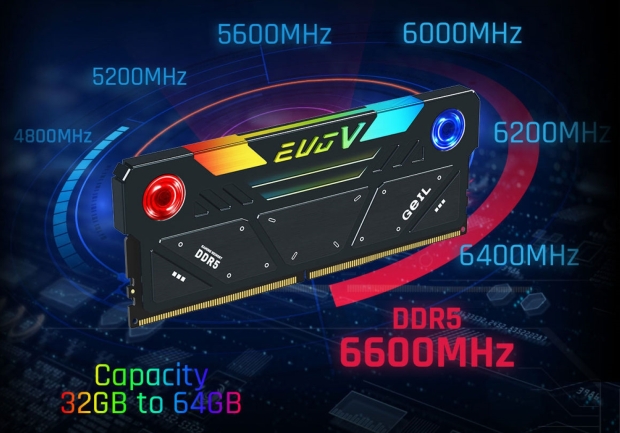 The new GeIL EVO V DDR5 RGB Hardcore Gaming Memory comes in 32GB and 64GB kits with speeds of between DDR5-4800 and DDR-6600. The unique heat spreader is joined with an active cooling system with RGB lighting and comes in both titanium gray and glacier white variants.

Even with the extensive cooling system and dual-fan cooler, the GeIL EVO V DDR5 RGB Hardcore Gaming Memory can fit next to most CPU coolers of the physical height of the heat spreader. The two cooling fans are found in the heatshield's top left and top right corners, pushing airflow across the DDR5 RAM: up to 45% more thermal dissipation is achieved, which is quite significant. Nice work there, GeIL.

Sabrent must be working with CERN and the Large Hadron Collider in the multiverse, making products in alternate realities with thousands of staff working in tandem... because the company has released so many new products and we're barely 5 months into 2022. 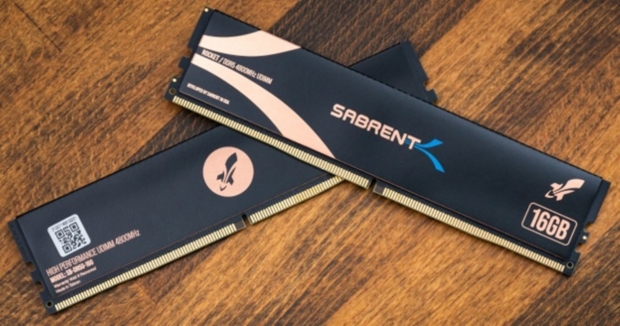 The company has just unveiled its new high-performance, low-latency DDR5 UDIMM memory modules: available in 16GB and 32GB single sticks at DDR5-4800 speeds. Sabrent explains: "It seems like DDR4 has ruled the roost forever. Finally, new motherboards and architectures have allowed memory to grow wings with the advent of DDR5. Improved clock speeds promise up to twice the bandwidth of DDR4, all with lower voltage for better efficiency".

"To further help with that last bit, DDR5 has on-board power management to reduce motherboard cost and complexity. Sabrent's new DDR5 kits simply plug and play, install your memory kits of choice, enter the BIOS and hit AUTO, and reboot. For those that want to OC these kits, there is plenty of headroom to advance speeds if you want". 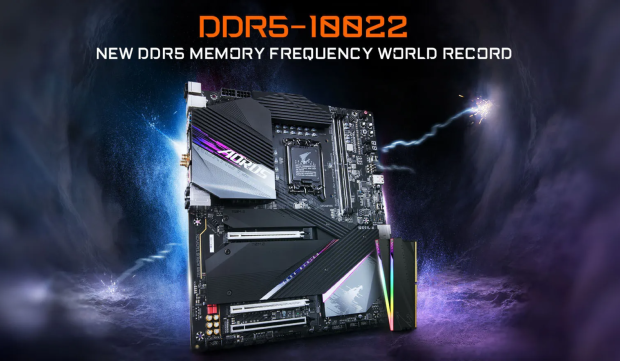 The record was broken by GIGABYTE's internal OC team that HiCookie leads, with the DDR5 memory frequency world record being achieved on the GIGABYTE Z690 AORUS Tachyon motherboard. This motherboard in particular, was crafted from its inception for overclocking... and those days are now here. 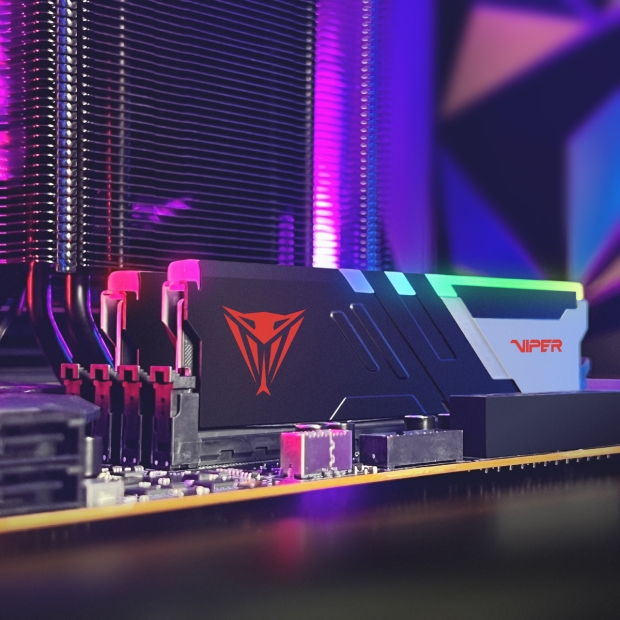 The new VIPER VENOM DDR5 RAM comes in both RGB and non-RGB memory kits, with 16GB and 32GB kits of DDR5-4800, DDR5-5600, and DDR5-6200. You've got the option of RGB and plain non-RGB if you wanted, with enthusiasts and overclockers ready to use the new VIPER VENOM DDR5 memory with their new Intel 12th Gen Core "Alder Lake" CPU and Z690-based motherboard.

The MSI OC Team used some very heavily overclocked Kingston Fury Beast DDR5 memory, boosting it up from its stock frequency of DDR5-4800 up to an insane DDR5-10004. The team of course used an MSI motherboard, with the MEG Z690 Unify-X and Intel's latest Core i9-12900KS processor, which was gimped down to 4 cores and a 425MHz CPU clock.

v-color is a brand you might not have heard of, but the company is out of Taiwan and has just announced its new Manta XPrism RGB DDR5 gaming memory. 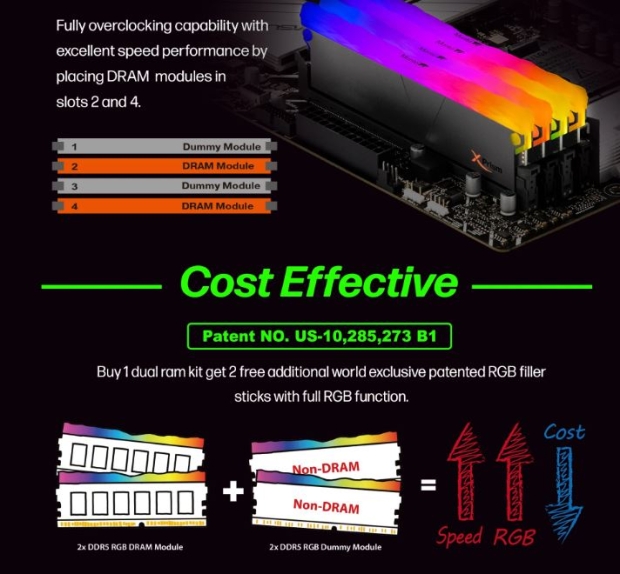 DDR5 memory is exclusive to Intel's 12th Gen Core CPUs and the flagship Z690-based motherboards, with the 32GB kits coming in 2 x 16GB, if you fill most boards with 2 kits you'd have 64GB of DDR5 memory ready to go. The new v-color Manta XPrism RGB DDR5 gaming memory is available in both white and black, and is XMP 3.0 ready for optimal frequencies out of the box with a few BIOS adjustments.

The new CAMM modules are up to 57% thinner than regular SO-DIMM memory that goes into laptops and mini-PCs, with dual-sided CAMM memory capable of pushing 128GB of DDR5 memory... insanity... perfect for super-fast portable workstation laptops.

This means that instead of using 4 x 32GB DDR5 memory modules into a laptop, Dell can configure its latest Precision 2022 series laptops with a 128GB DDR5 CAMM module instead. That's an incredible achievement, and it's not something that's exclusive to Dell -- the company may have patented CAMM, but it was made in collaboration with memory companies including Intel. 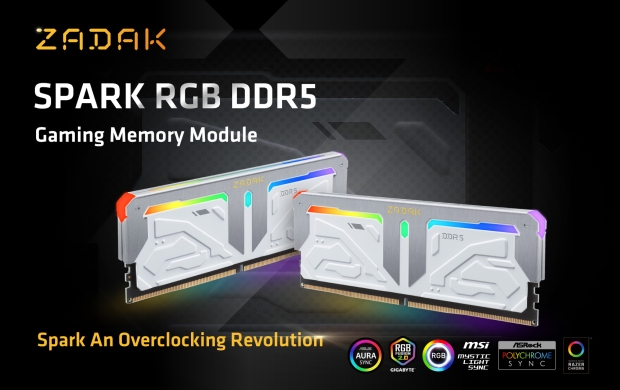 The new ZADAK SPARK RGB DDR5 gaming memory comes in both 16GB and 32GB kits, with speeds of between DDR5-5200 and DDR5-6400. ZADAK is using a matte white look with a frosted texture, with "gem-like" decorations.

ZADAK explains: "The SPARK RGB DDR5 gaming memory module features a matte white exterior with a frosted texture. The top of the module features a slender aluminum alloy dissipation array that releases heat from the heat sink. And the staggered design of the materials presents a hollow light-guide effect with gem-like decorations. The eye is inevitably drawn to the gem shape set in the center of the heat sink, which shows off the dynamic multi-zone RGB lighting. This stunning aesthetic will give it a place of honor in any high-end gaming rig".