The latest and most important RAM news.

In addition to blistering speed potential that will put it alongside some of the fastest DDR5 memory we've seen, it's built on the highly regarded and high-performing Hynix A-die memory module. Some users have been able to push the SK Hynix A-die to DDR-8600+ speeds with relative ease - leading to the tech being hailed as the fastest memory on the planet. 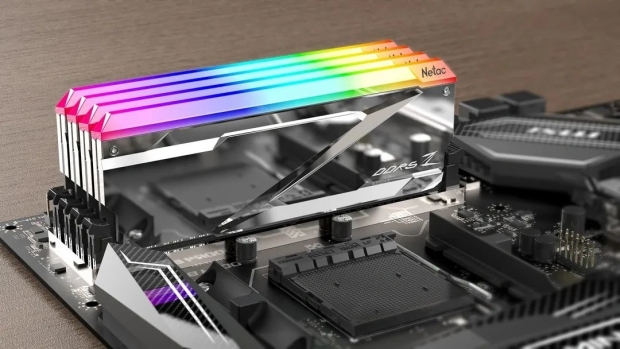 With 16GB and 32GB kits available, each featuring a slick layer of RGB lighting, the Z-RGB series from NETAC starts at 6200 MT/s CL32 at 1.35V, going up to 8000 MT/s CL38 spec. That will require 1.5V, so it might be limited to certain motherboards. If you're looking at this sort of kit, you're probably rocking a high-end board.

With the arrival of DDR5 technology into the memory space, extreme overclocking of RAM has seen some remarkable results in recent times. And we can add a new world record into the history books today as HiCookie - an in-house overclocker over at GIGABYTE - has managed to push speeds to an incredible DDR5-11136 OC (5567.5 effective), which is over 11 Gb/sec. 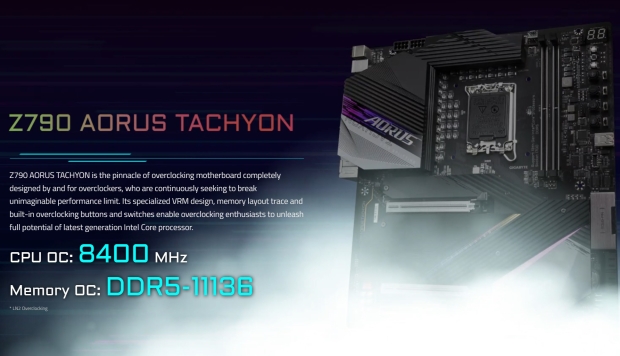 The results were achieved on a GIGABYTE Z790 AORUS Tachyon motherboard custom-built for extreme memory overclocking thanks to its dual-DIMM design with an Intel Core i9-13900K Raptor Lake CPU.

The memory used was GIGABYTE's own AORUS DDR5-8333 modules, representing some of the fastest DDR5 modules you can get. Well, you will be able to get - these modules are as-yet unreleased. 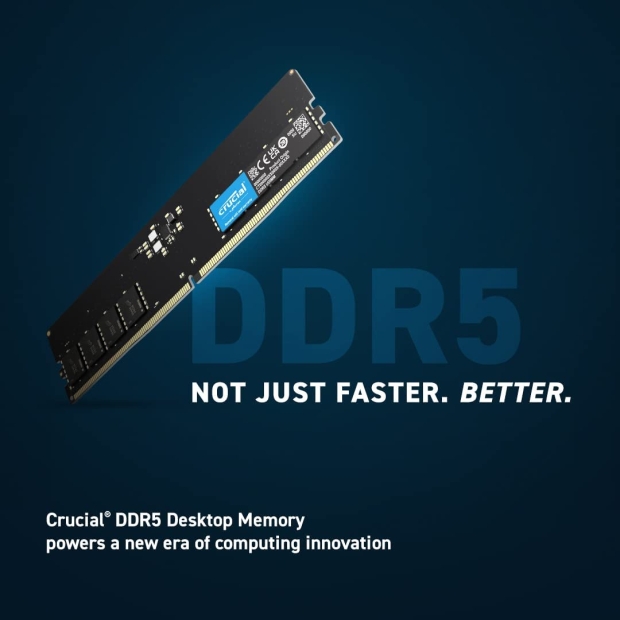 The new DDR5 memory from Micron (aka Crucial) features data transfer rates of 5200 MT/s and 5600 MT/s, though it's the DDR5-5600 models that will have the new modules. These will be available alongside the standard 8GB, 16GB, and 32GB sticks. As for why? Well, outside of offering more choices and a cheaper way to boost memory without having to go the 64GB or 128GB route, the new module capacities are great for modern CPUs with 16 or 24 cores.

Samsung has just announced its new GDDR6W memory, which the South Korean giant says was created for "immersive metaverse experiences with powerful graphics memory" or whatever that means. 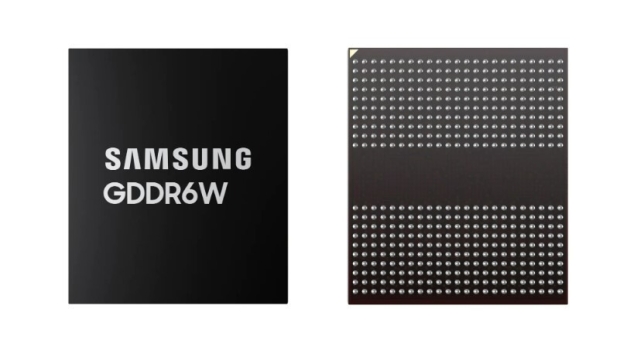 The new Samsung GDDR6W was created with double the capacity, and performance based on the cutting-edge Fan-Out Wafer-Level Packaging (FOWLP) technology. The new Samsung GDDR6W memory is the industry's first next-gen graphics DRAM technology, building on top of the foundations of Samsung's GDDR6 memory with the new Fan-Out Wafer-Level Packaging (FOWLP) technology, boosting memory bandwidth and capacity.

GDDR6 has been on the market for a while now, with Samsung unleashing faster 24Gbps GDDR6 memory in July 2021, quickly becoming the industry's fastest graphics DRAM. The new GDDR6W modules have bandwidth and capacity that are doubled over GDDR6 while maintaining the identical side of GDDR6 modules.

KLEVV has just introduced its new DDR5 standard U-DIMM and SO-DIMM memory at DDR5-5600 speeds, ready to rock and roll inside of your new Intel "Raptor Lake" or AMD "Zen 4" system. 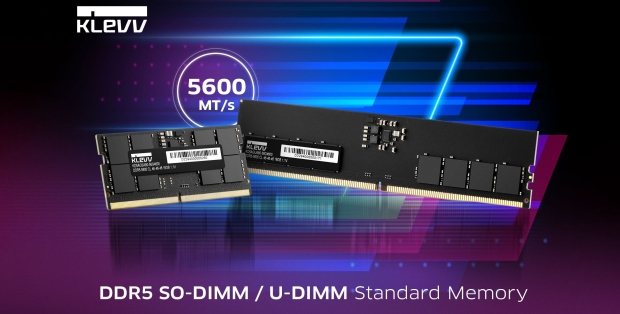 The new KLEVV DDR5 standard memory is fully compliant with JEDEC standards at DDR5-5600 speeds in both its U-DIMM and SO-DIMM variants: U-DIMM for a desktop PC and SO-DIMM for a laptop. KLEVV is making its new DDR5-5600 memory available in a single 16GB DDR5-5600 as well as a 32GB kit with 2 x 16GB sticks.

KLEVV is aiming its new DDR5 RAM for multiple markets including business, learning, entertainment on desktop and laptops... no mention of gaming systems there in their press release, maybe a hot tip: add that in, because gamers (there would be at lease ONE) that would buy this memory.

GIGABYTE's new high-end motherboards have new generation Shielded Memory Routing design, exclusive BIOS settings, top-quality components, and an advanced design from hardware to firmware on their motherboards. This is how they've achieved the DDR5-7800 memory support on their new Z790 motherboards. 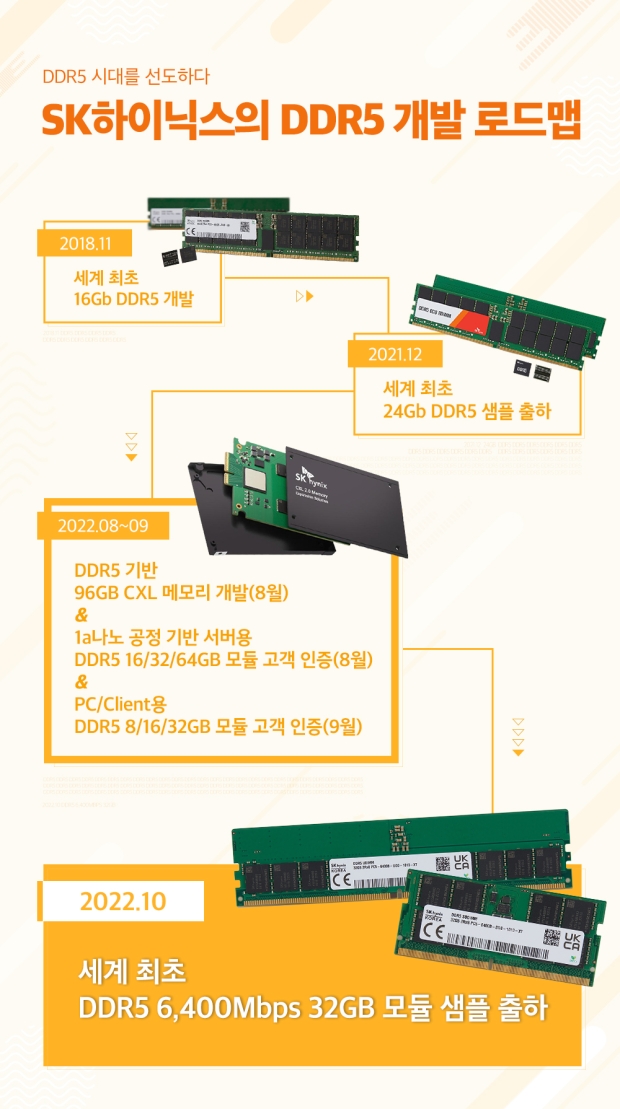 The new SK Hynix DDR5-6400 memory modules are the fastest DDR5 products for the PC so far, with the company using a new device called CKD (Clock Driver) which is used to provide more stable operation at the higher 6400Mbps speeds. SK hynix is the first company to use CKD, and the first to provide samples to customers, a PC SoC (System on a Chip) company, to conduct system evaluation.

If you are planning on buying yourself one of AMD's new high-end Ryzen 7000 series "Zen 4" processors, you might want to wait and check out the latest MicroCenter deal: you'll get 32GB of DDR5 RAM for free.

Continue reading: You can get 32GB DDR5 for FREE at MicroCenter with high-end Zen 4 CPU (full post)

AMD's new Ryzen 7000 series "Zen 4" CPUs usher in the world of DDR5 memory, with the company making it clear that DDR5-6000 memory is the "sweet spot" for your new Zen 4 system. 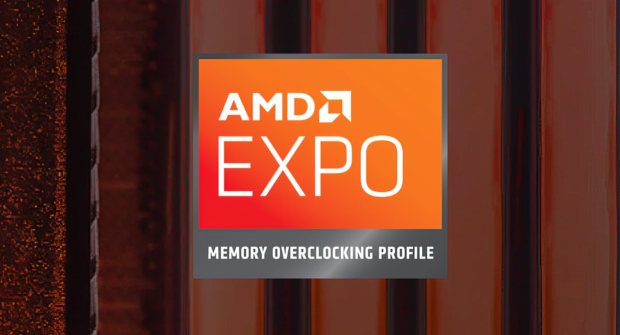 On the official AMD Discord server, Technical Marketing Manager Robert Hallock confirmed the news himself: using the AUTO setting will usually give you the most performant result unless you have an "astonishing overclocker". Hallock was fielding questions on Discord from users, in regards to DDR5 memory and their new Ryzen 7000 series "Zen 4" CPUs.

Hallock says that at its native setting, DDR5-5200 will operate in a 2:1:1 mode or 1733:2600:2600 clock, to which someone else replied saying "what is the sweet spot? 6000mhz" to which Hallock replied "roughly, yes" and then he said that to be more specific the "sweet spot" he's referring to is the best compromise of cost/stability + performance + availability + ease.