Elon Musk is back in the headlines with another controversial topic: "overpopulation" which is another thing that I fully agree with him on.

In a new article headlined "Demographers Warn of Impending Population Collapse" from The Epoch Times, Emel Akan shared it on Twitter, tweeting: "According to @elonmusk, the greatest challenge the world will face in 20 years is population collapse. This is an excellent article that explains the causes of population decline and why it is problematic".

Elon replied, tweeting: "Earth could sustain many times its current human population and the ecosystem would be fine. We definitely don't have 'too many people'".

Anyone that has travelled large distances -- by plane is the best -- will see just how much vacant land there is. As an Australian, we have 95% of our land unused with a land mass roughly equal that of the USA. If you compare that to the likes of Russia... which is absolutely mammoth... or any other large nation, we could sustain trillions of people.

We're told -- no, it's shoved down our throats -- about "overpopulation" yet even the richest man in the world doesn't agree with it. Imagine if they used parts of the world that aren't used yet, and built mega-facilities that are 100 stories deep into the ground (earthquake-proof) and 100 stories above ground. 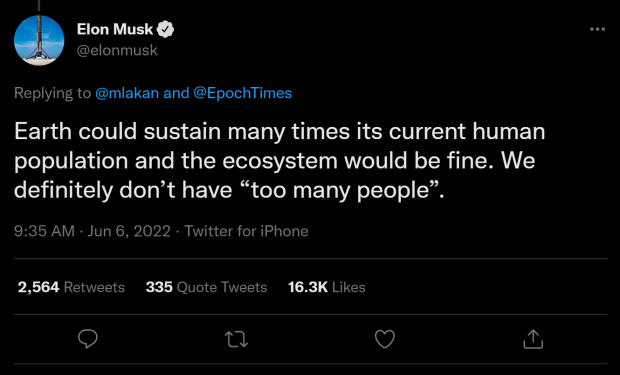