If you ever wanted to have a pizza party and left your favorite checkerboard-themed handkerchief, the best place would be one of Jeffrey Epstein's private islands and some BFFs in Bill Clinton, Kevin Spacey, John Podesta, and many others. 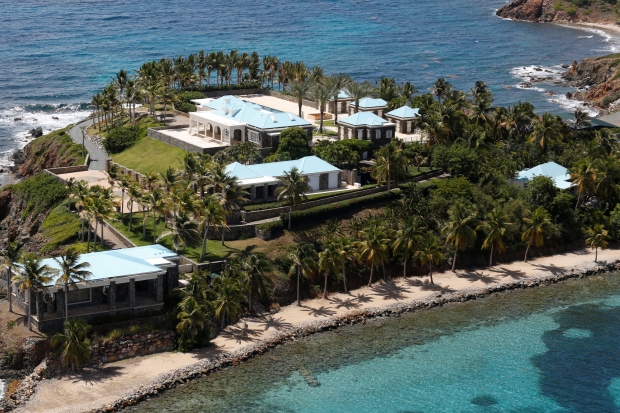 There are now two of Jeffrey Epstein's luxurious and most likely satanic private islands that are up for sale, according to listing agents, for a swift $125 million. The first of which is the larger of the two islands: Great St. James. which is over 160 acres, and is around 5 minutes across the bay from St. Thomas.

But then there's the infamous and definitely DNA-scrubbed Little St. James, which is over 70 acres and has its own helipad, a private dock, gas station, two pools, a main residential compound, four guest villas, three private beaches, a gym, and a tiki hut. I'm sure there is a lot more, and taking it all in will leave you frazzled.

Whoever decides to spend the $125 million securing Epstein's private islands will see some of their money go towards outstanding lawsuits for his victims, as well as the regular costs of the estate's operations. Epstein's estate has already seen $121 million in compensation to victims under the Epstein Victims' Compensation Program -- which ended on August 2021 -- but now his private islands are up for sale so those funds can drip down to his victims finally.

The Baron Trump Collection: Travels and Adventures of Little Baron