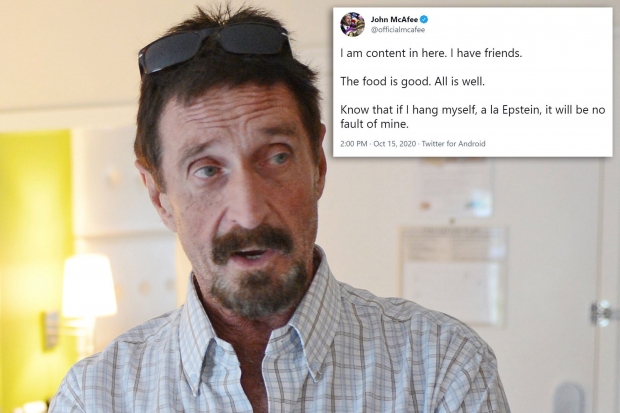 If you aren't a "conspiracy theorist" or don't read these topics in the media, they've probably gone over your head -- if they have, then I would suggest diving into this if you are of a curious mind. Those that are, might have noticed that McAfee has been talking about Epstein for years since his "suicide" and now McAfee's "suicide".

If we follow the white rabbit, there's a tweet from McAfee from December 1, 2019 at the top of the post -- where he said: "Getting subtle messages from U.S. officials saying, in effect: "We're coming for you McAfee! We're going to kill yourself". I got a tattoo today just in case. If I suicide myself, I didn't. I was whackd. Check my right arm".

McAfee was pretty clear on what he thought about Jeffrey Epstein, the very well-connected billionaire that no one really knows what he truly did and how he was so powerful and rich. He was best friends with Bill Clinton, Bill Gates, Prince Andrew, and many other influential people -- many of which have turned up suicided, too.