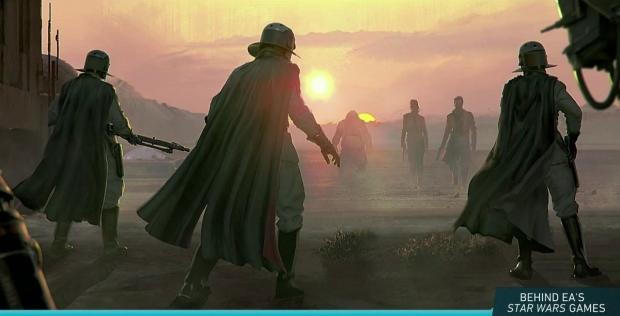 When EA's E3 presser came and went without any mention of Visceral Games' new action-based Star Wars game, I was disappointed. But I have to admit it makes sense.

This year is all about Battlefront II, which is a massive, massive undertaking for EA and DICE. Visceral's new Star Wars game, which doesn't even have a final name, has been MIA for some time. The game wasn't shown at the recent Star Wars Celebration, and now it's missed EA Play 2017. Could it be delayed past its original 2018 release date?

Renowned Uncharted scriptwriter Amy Hennig is leading the project at Visceral Games, and aims to capture the magic of the original trilogy for the project. Hennig recently confirmed that 2017 was "Battlefront II's year," and that Visceral is "still hard at work on our game, though, have no fear!"

Todd Stashwick, who's helping Hennig write the game, confirmed the game wouldn't be at E3.

"DICE and Motive have something great with Battlefront 2. It's their time. We will have our day in the twin suns. No fear. It will be glorious," he said on Twitter.

Read Also:- You might play as a bounty hunter in Visceral's new Star Wars game

DICE and Motive have something great w/ #Battlefront2. It's their time. We will have our day in the twin suns. No fear. It will be glorious.

It's #Battlefront2's year - very proud of our friends at DICE and Motive! We're still hard at work on our game, though, have no fear... :)

I've written quite a bit about Visceral's new Star Wars game so I'm quite excited about the project, and I'm hoping the title isn't delayed past 2018.

Oddly enough EA showed off BioWare's new IP, now known as Anthem, at E3 2017, and that project may not release until as far as March 2019.