A month less than three years ago, we saw our first Celcius cooler from Fractal. At that time, they took an average Asetek AIO, and bolstered the appearance of the head unit, used compressions fittings with wires run through them. Still, one of the significant changes over the typical Asetek offerings was that Fractal also included a fan hub on the radiator. At that time, our opinion of the Celsius coolers, more specifically the S36, was that we liked it, but we did take some points from it in performance as well as for value, but it was still awarded.

After a long absence, Fractal is back at it, this time using the latest generation Asetek models as the base for the build, but Fractal changed most everything else about the design! Opting for some of the most potent fans we have seen in a long time, and on top of that, they are ARGB PWM fans! Fractal even comes up with new tricks for the head unit. Where most are textured plastic, the coating here is matte and rubberized, much like what we see on mice!

There is a mirrored cover that has an ARGB LED ring around it, and in that same assembly is a switch to run one of two cooling options! We are just getting started with the list of changes and features of what makes the new Fractal cooler a stand out against those from NZXT or Corsair, but we do need to save some of this for the rest of the review, but we will get to it all at some point.

The series has evolved to what is now the Celsius Plus series, which contains a total of six new models. These models have options of a 240mm radiator, a 280mm radiator, or a 360mm radiator, within two sub-families. The first of them is referred to as the Dynamic, which does not come with ARGB lighting, and the fans differ from what we have. What we have been sent is from the second group, the Prisma line, and is the Celsius Plus S28 Prisma from Fractal.

While many AIOs that start at Asetek have not been great performers, with the specifications we have read, we have high hopes for this design, as it appears Fractal is giving the Celsius Plus S28 Prisma every chance they could, to make a run for the top of our charts! Taking the information found in the reviewer's guide, we adapted it into an easier to read chart, which is seen above. Compatibility comes first in the list, and we understand that anything Intel is supported after, not including, LGA775, and the AMD support covers everything made after socket 939.

We quickly move to the copper cold plate with its pre-applied thermal paste on it, under the 45mm tall head unit. With the fittings included, the width and depth are 86mm and 75mm, respectively, but the main block body is only 62mm. Above the cold plate is the pump, and it will usually spin, up to 2500 RPM on a ceramic bearing, but there is a note to that speed. Should the liquid inside reach 60-degrees, the pump reacts by spinning at 3500 RPM until liquid temperatures reduce. The pump is powered with a PWM fan connection and is shown not to exceed 20 dB(A) while under operation, sipping 0.35 Amps over its 50,000-hour lifespan.

The tubing between the head unit is 400mm long, and it is low-permeability rubber with black Nylon braid covering it, which also has a fan power lead running along one tube, and the ARGB cable down the other, contained under the sleeve. The tubes connect to standard 90-degree swivel fittings at the head unit but use a new plastic compressions sleeve to capture the tube while allowing the wires to pass through as well. At the radiator end of the tubing, there similar sleeves around the fittings, which are on straight barbs, but the fittings do twist as well.

The radiator, which is a high FPI aluminum model, measures in at 143mm wide, 30mm thick, and 324mm long, with standard 6-32" fan mounting threads.

Depending on which of the models you wish to pursue, prices will vary. As for the Celsius Plus S28 Prisma that we have in hand, Fractal is asking the same MSRP that we see many of the 280mm Asetek AIOs release at. That is right, to get something that looks entirely different than the average Asetek unit, comes with killer fans with ARGB support in the fans and the head unit, all of the features many strive for in an AIO. At $149.99 for the S28 Prisma, Fractal comes out with high hopes for this liquid CPU cooler, and we hope it does well, as we like to see more competition like this. 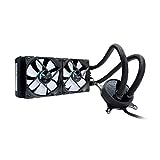