As we said in the previous review, next to Corsair, NZXT has to be the second-biggest name in the AIO game, and have delivered us products in the past that were all the rage at the time, much like what they are attempting again in their newest X-3 series of sealed loop CPU coolers. Innovation is the name of the game with the new Kraken coolers, where it appears they have tried to think of everything that will benefit both NZXT as well as the end-user.

For those of you who have not glanced at the X53 review of the new Kraken coolers, let's bring you up to speed. NZXT took the latest AIO off the shelf at Asetek and cut, copy, and pasted ideas on it until they came up with what they feel is the next move to where the CLC game is going to go next. Everyone has low-noise fans these days, most companies offer RGB in some form on their coolers, tubing length has been gradually increasing, and many provide competent software suites to take full control of the systems. NZXT does much of that but also includes things like a rotatable top to the head unit, RGB lighting in the head unit, which then also branches out with HUE2 output signal to sync with other NZXT HUE compatible devices, and even increasing the viewable area where the ring effect and logo are displayed.

While we still have hopes to see the Z-3 Kraken coolers sporting a customizable screen on the head unit, we are here to see the largest of the X-3 coolers, the Kraken X73. Even knowing what we do about the X53 at this point, we still have hopes that the extra surface area that this 360mm radiator offers delivers the performance we expect it to. With another seventy or so CFM of airflow to drop the coolant temperatures, we would expect to see at least a couple of degrees advantage over the smaller unit. At this point, saying less is more, and we feel it is time to dive in and see if the NZXT Kraken X73 changes our outlook on this new way of offering an AIO to the masses. With information found on the box and in the reviewer's guide, we put together the chart you see above. In it, we see that the head unit is 80mm in diameter, it stands 55mm, in height, is made with a copper cold-plate, and the housing around the pump and plate is made of black plastic. The pump speed is variable, starting at 800 RPM, and with software, you can top it out near that 2800 RPM mark. Power for the pump comes from a SATA power lead on the pump, drawing 0.3A over the 12V line.

The radiator of the Kraken X73 is 121mm wide, it is 394mm long, and it is 27mm in thickness. All of the components of the radiator are made of aluminum, and once assembled, it is painted black to match the rest of the cooler.

There isn't much to say about the tubing, but what we see is good news. The tubes are made from ultra-low evaporation rubber, which is sleeved in black nylon braid, and from fitting to fitting, it is 400mm long.

What NZXT calls the cap is referencing the top portion of the head unit. It is made of plastic as the "window" and brass for the "ring." The cap can be rotated to any of the 360-degrees but offers segmented stops every 30-degrees. Within the head unit, in a combination of the infinity mirror ring around the edge and the logo, there are none LEDs under your control. Part of that lighting ability exits the head unit in the form of a HUE 2 output lead with a proprietary 4-pin male connection at the end of it. The lead enables the X73 to sync with NZXT RGB LED strips or Aer RGB fans.

The fans get the most real-estate in this chart, and we see we get three Aer P120 120mm fans to cool the radiator. The fans can spin from as low as 500 RPM on up to 2000 RPM delivering 73.11 CFM of airflow. The pressure is good at 2.93 mmH2O, and 36 dB isn't obnoxious, but in the audible range. The seven blades and the hub spin on a fluid dynamic bearing, and requires 0.32A and 3.84W to get to those specifications. We did the math in the X53 review, and 60,000 hours is 6.8-years of life, which means as long as the pump holds out, the cooler should outlast the 6-year warranty, should something fail in that timeframe.

Compatibility, you can see that at the bottom of the chart, and to go out on our own, we will simplify things. LGA775 is no longer supported, but anything after that is for Intel. NZXT says they are AM4 ready, which also applies to AM3, and while they mention AM4 support, the bracket to make that happen does not come in the box. 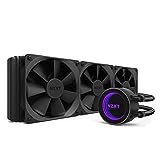