The latest and most important Computer Systems news - Page 4.

Origin has just built the world's "fastest" custom gaming PC into a driveable Tesla, would you like to take your gaming PC on the go?

Above we have a video released onto the Marques Brownlee (MKBHD) YouTube Channel, and as you can see from the video, Origin PC has taken custom gaming PC building to a whole new level. Origin PC has created a custom gaming PC that is inspired by MKBHD's Tesla Model S. The car is actually a toy for kids and built by Radio Flyer. Origin PC noticed that under the hood of the Tesla was an empty space (just like the normal Tesla), and thought - "why don't we throw a gaming PC in there?".

If you are a steamer, or are interested in streaming, then you have most likely heard about a dual PC setup. But have you ever seen a dual PC setup as crazy as this one?

Introducing ORTHRUS, a custom water-cooled dual-system PC that is rocking most of the best hardware you can get right now. This build was done by Harris Heller, a well-known Twitch streamer and a full-time content creator on YouTube and other platforms. Harris decided to take his original dual system streaming set up and jam all that delicious hardware into one convenient case.

So what kind of hardware are we looking at here? First off, the case is the Phanteks Enthoo 719. Inside of that case is two motherboards, a full-size ATX for the streaming PC, and a mini ATX for the gaming PC. The streaming PC is running a Ryzen 7 3800X with an RTX 2080 SUPER, and the gaming PC is running an Intel i9 9900K with an RTX 2080Ti. Water-cooling wise, Harris decided to go with EK Water Blocks for water blocks and NZXT for the AIO coolers. If you are interested in more about how Harris built this PC, check out the above video and his channel.

Over the years, Raspberry Pi's has only gotten better and better, but this year could very well be the best year yet.

According to the blog post, due to the drop in RAM prices, Raspberry is now able to bring down the cost of the Raspberry Pi 4 with 2GB of RAM to just $35 from $45, which is the same price as the original Raspberry Pi when it launched. When comparing the Pi 4 to the original Pi from 2012, it has 40x the CPU performance, 8x the memory, 10x the I/O bandwidth, can support 4x the number of pixels on screen as well as dual screens, and finally, has dual-band wireless networking.

This gum-sized microcomputer can code all of your musical instruments

Introducing Daisy, the tiny microcomputer that sports all of the necessary equipment for coding your musical instruments. 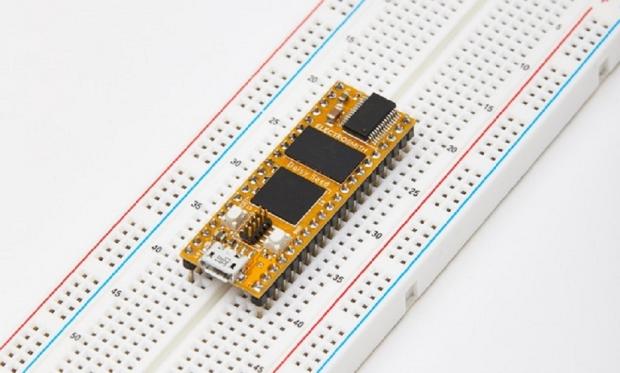 The company behind this little device is Electrosmith, and according to their announcement, Daisy comes with the following features. Two channels of line-level audio, MIDI connectivity, an in-built micro USB port, 64MB of SDRAM, and latency under 1ms. It doesn't stop there though; Daisy also comes with programming languages such as C++, Arduino, Max/MSP, and Pure Data.

At the moment, Daisy is available on Kickstarter and comes in at the cost of $29, which I think is a damn good price considering all the features that come with it. If you are interested in checking out the other things that Daisy can do, head on over to the Kickstarter page here. On a side note, Electrosmith also believes that Daisy would be a great addition to STEM (Science, Technology, Engineering, Mathematics) research and education. Quite a nifty little device Electrosmith, fantastic work!

Continue reading: This gum-sized microcomputer can code all of your musical instruments (full post)

Corsair's new ONE PRO i200 compact workstation-grade PC has been announced, packing in some seriously kick-ass components into something near impossibly small. 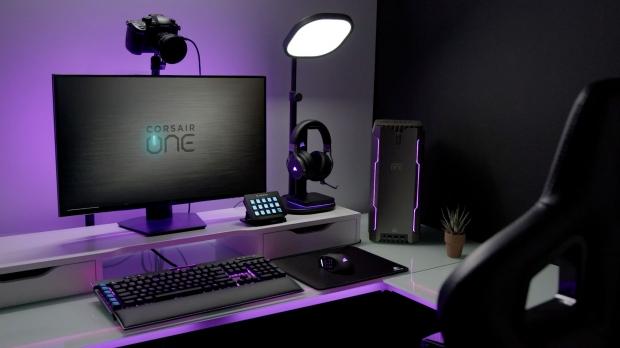 The new Corsair ONE PRO i200 packs a high-end 14-core, 28-thread Intel Core i9-10940X processor and flagship NVIDIA GeForce RTX 2080 Ti graphics card. Corsair also installs a huge 64GB of quad-channel VENGEANCE DDR4 memory that can handle virtually anything you throw at it when it comes to workstation use.

Corsair also packs in a super-fast 2TB M.2 NVMe SSD that will ensure you have super-fast loading times, and super-fast read/writes for everything you want to do. Corsair's new ONE PRO i200 workstation is not just a kick ass workstation PC, but it would be an insane gaming PC that would handle everything you throw at it all the way to 4K 60FPS gaming.

Apple Mac maxed out with over 6000 tabs of Chrome uses 1.4TB of RAM

Apple debuted its new high-end Mac Pro last year, which can be configured with some pretty wicked-fast hardware and can pack up to an insane 1.5TB of RAM and cost up to $50,000. That 1.5 terabytes of RAM is meant to be used for professionals and content creators, but what about Google Chrome?

Jonathan Morrison used his fresh new Mac Pro with 1.5TB of RAM and put it to the test, opening up countless Chrome tabs that started with around 2000 tabs chewing up 75GB of RAM. From there, over 5000 tabs were opened and Chrome was using over 170GB of RAM. But after leaving the system overnight, Morrison came back to see over 6000 tabs open and Chrome RAM usage hitting 857GB.

The testing continued, with Chrome pushing up past 1TB of RAM, into the max territory of 1.4TB of RAM -- simply insane. In the end, Morrison's new Mac Pro packed with 1.5TB of RAM eventually saw Chrome crash -- shocker -- but other apps within macOS were operating normally. A testament to Apple's own macOS, and a snicker towards Google and its web browser Chrome.

I hope Jonathan purchased those $400 wheels for his new Mac Pro, too.

We now live in a world where foldable displays and smartphones are a reality, with Samsung already on the market with their game-changing Galaxy Fold -- but what is Apple doing about that? 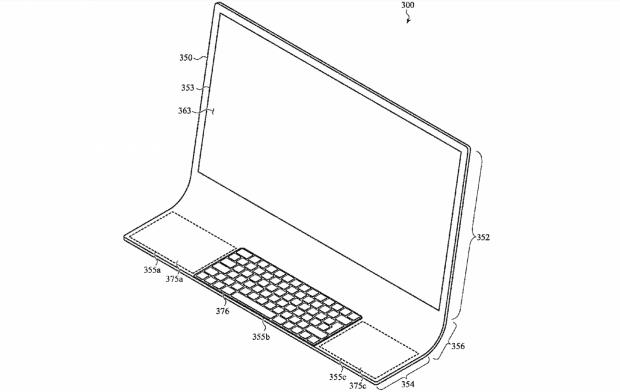 According to a new patent filed by Apple, we could expect a revolutionary new Mac in the future that is built from a single sheet of glass. As you can see from the patent, it is curved into a display at the top and keyboard and track pad at the bottom. We should expect the display, camera, and sensors in the top half of the new Mac -- while the wedge at the bottom (in the image below) would most likely house the internals of the system.

Apple would have one of the most interestingly designed PCs on the market with this new patent, but considering how many years the company is behind everyone else that is already experimenting with foldable tech... don't expect the foldable iMac any time soon. I'd give it at least another 2-3 years before we see something this radical from Apple on the desktop.

AMD is kicking off the new decade with a collaboration with Corsair on its new Vengeance gaming PC, which is powered by all-AMD goodness packing a kick-ass Ryzen 7 3700X processor and Radeon RX 5700 XT graphics card.

Since it's a Corsair gaming PC, the cooling is handled by Corsair using their in-house H100i RGB Platinum AIO cooler, which is then installed into the Corsair Crystal Series 280X RGB case. You'll also find the rest of the components to be from Corsair too, with 16GB of Corsair Vengeance RGB PRO DDR4-3200 RAM, a Corsair RM650 PSU, and a 2TB HDD. 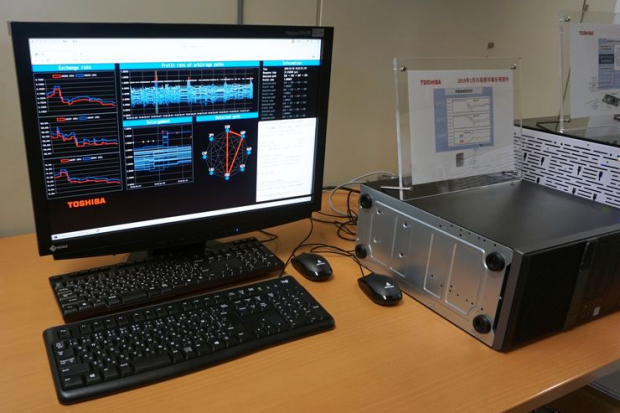 The two Toshiba research scientists are Hayato Goto and Kosuke Tatsumura, and back in 2015, Goto originally created the idea for the new algorithm after noticing how some parts of a complex system can go through a bifurcation process once new inputs are implemented. It took Goto a further two years to implement the new algorithm, which has been called "Simulated Bifurcation Algorithm". Goto then partnered with Tatsumura, and with his knowledge, the researchers were able to make the new algorithm scalable.

After some time tweaking the design process, the researchers were able to get the algorithm to not only work on a traditional computer with off the shelf components but also a cluster of server CPU's and field-programmable gate array (FPGA). Using an FPGA, the reports of Toshiba's new algorithm is to be up to ten times faster than a laser-based quantum computer. Toshiba plans on selling the "Simulated Bifurcation Algorithm" to stock trading companies, social networks, and manufacturing companies. Toshiba is aiming this new algorithm at solving companies' combinatorial optimization problems.