BioWare is working on a massive new ambitious IP that will incorporate more than 20 years of games development into one game. In many ways, BioWare's new IP is their dream game--it's their "Destiny." But...it could end up being marred by microtransactions and business strategies that ultimately pull the magic out of gaming.

BioWare's new IP is 100% brand new and the studio has been working on it for the past 5 years. This new IP is built from scratch, will be in the action-adventure vein instead of RPG, and it will be a new franchise.

We've seen strong evidence that this new IP will be online-based, somewhat like Destiny, and I even wrote that the new IP could be BioWare's unique answer to Destiny.

BioWare has confirmed that they're trying to make a "fictional world that feels real and is alive and is constantly changing," which strongly hints that it'll be online based. Plus there's this little bit of info which says the new IP will have "extensive online elements."

So when EA is involved with anything online-based, what does that usually mean? Microtransactions, DLC, season passes--the bane of most gamer's worlds. Even Destiny has microtransactions now--or MTX, as EA calls them--to continue funding the development of new content. But there's many other reasons why I'm worried about the new franchise.

During EA's recent fiscal earnings call, EA CEO Andrew Wilson said something that perked my ears right up: he said that instead of RPG-based, the new IP would be "genre-melding," and thus incorporate all of BioWare's best features into one game.

"At BioWare, we're building games for the next generation. How far can we go with these new games? Wait and see."

Now if you saw my concerns about Mass Effect: Andromeda, you'll know that BioWare has been doing this genre-melding thing for quite some time.

In fact, most of the newer games are a melding of accessible elements meant to attract mainstream gamers rather than core RPG fans. Look at how the Dragon Age series has changed over the years, and look at how Mass Effect has become considerably more "safe" and less risky--and more popular, as a result.

I foresee this trend continuing in the new IP alongside microtransactions, subscription-based services, DLC/season passes, and all of the other things EA does to make money.

In many ways, I think this new IP will be a vehicle for new levels of profits, recurring consumer spending via digital content, subscriptions, and higher engagement with a massive online multiplayer push.

Genre-melding...wait, that's not new! EA's done that for a while now

On the content side, EA promises that the new IP franchise will incorporate action-adventure experience that combines the core talent BioWare is known for, including the deep character progression and story elements. A true "genre-melding" shift.

As far as the genre shift, I predicted a long time ago that the new IP would be action-based instead of RPG-based.

EA is pushing the action genre really hard, and I wouldn't be surprised if it categorized Mass Effect: Andromeda as an action game. For example, all of the upcoming Star Wars games are action-based

Now to me it sounds like EA and BioWare want to suck out all of the things that make their games great, put them into a blender, and mix it up for gamers to consume. But the problem here is that early BioWare games have proven to be lightning in a bottle, and BioWare has consistently proven it has no interest in capturing that magic again.

As such, I think the drink BioWare and EA give us may be lukewarm. Sure it'll be tasty, and it might be something we can sip on for a while, but...it won't be the same as early BioWare experiences.

Also I believe BioWare's new IP could be that "gigantic open-world action game" EA has always wanted to me. Scratch that; I think this will be the game both EA and BioWare have always wanted to make, and will be a clear contender for Destiny 2.

The new IP has been in development since 2012 by BIoWare's Edmonton team, which is the same team that created Mass Effect. Based on the short teasers, we can discern the new IP will be sci-fi based.

Despite the clues EA and BioWare have already given us that the new IP would be online-based, they give us another one: 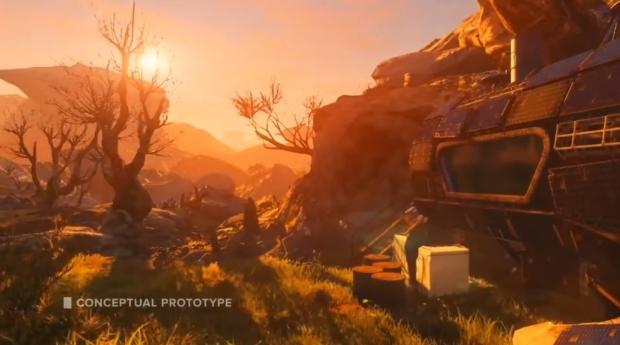 Is this a turning point for BioWare?

Now here's the main reason why I'm worried about this new IP.

All of the other things--the microtransactions, the online-focus with subscriptions, the season passes and weird genre melding--come second to this main worry.

I'm mostly concerned that BioWare could use this new IP as a transitioning point. I'm worried the new IP will give BioWare an excuse to focus solely on whatever's most popular or most profitable, including action-based online games with microtransactions.

I'm worried that everything BioWare does from this point on could be affected by this new shift, and the turning point could affect Mass Effect, Dragon Age, and everything else it may do.

Finally, I'm worried that Dragon Age and Mass Effect will be put on the back burner in favor of this new IP. Sure that sounds paranoid given Edmonton was working on this while Mass Effect: Andromeda was in development at the Montreal studio, but...look what happened to Bungie.

That's really all I have to say: look what happened to Bungie.

Bungie was given the rights to make their dream game, and it fell apart before their eyes and they had to put it back together. Hell, Bungie practically fell apart in the process, and the Original Seven are fractured forever.

But I'm still worried, and now you know why.

In 2012, we began crafting a new universe full of new characters, stories, and gameplay. Our ambition is simple: Draw upon 20+ years of development knowledge and lessons to create something fun and new for you to enjoy with your friends. There's nothing quite as exciting as building a new IP from scratch, and it will be even more thrilling for us to share more with you in the future.