While NZXT may not have been the first company to bring AIOs to the masses on a considerable scale, the Kraken series of coolers have made quite a name for itself. That can be good and bad. Some love the Kraken series for how NZXT differentiates their style from others like Corsair, and there is the other camp that feels the software needs some love and tends to shy away from the brand.

For us, we are huge fans of what NZXT has done over the years, not only in the performance of the earlier units, but the infinity mirror in the head unit is also something we appreciated aesthetically. Rather than going stale, and rehashing existing models to obtain the latest Gen 7 Asetek builds, what else is there to do with an AIO at this point?

Features are an interesting thing in the land of AIOs as of late! Many companies have kept to the original ideals set forth with the introduction of these types of coolers, but across the board, companies are trying new things. In this instance, NZXT has done three things that are blatantly obvious once you have the cooler in your hands. First, they increased the size of the display on the head unit by ten percent, as we all know, bigger is better. The next thing was even more apparent, as we noticed the NZXT name in the head unit was not in the proper orientation. The odd alignment leads us to the fact that the top of the head unit now turns 360-degrees!

The last thing they added, while removing fan control and power connectivity, was the addition of a HUE-style RGB header to the head unit that allows users to connect fans and RGB strips directly to this new AIO. On the face of things, this all seems very impressive, and gives users more options when it comes to illuminating a chassis or building in confined spaces!

Part of the release of five new AIOs to the market is the Kraken X53 240mm liquid cooler with RGB. We do also have the 360mm version for testing in a later review. However, NZXT is also offering the Z-3 series, which provides a customizable screen in the head unit and a hefty price increase. Getting back to what we have in hand, there are many things to check out with the new NZXT AIOs, and we will see where we stand with everything as a whole as we take you through this review. In the chart we created from information in the PR we were sent, we start at the head unit. The water block, as NZXT calls it, is 80mm in diameter, which is the same as earlier models, as is the 55mm height. The cold plate is made of copper, and the lower portion of the housing is made of plastic. When 12V is applied, the pump will spin in the range of 800 to 2800 RPM, controlled by either the motherboard or CAM software. Skipping down a bit to the "cap" section, we also see that the top is made of brass, but the window covering the NZXT logo and infinity mirror is plastic.

Also, all part of this same assembly is the inclusion of nine LEDs into the head unit and its ability to spin 360-degrees. The last bits about the head unit fall into the RGB output. The power supplied is 5V, and we are shown we can connect four 10-LED strips, five Aer fans, or six in total, somehow, mixing fans and strips.

The next part of the X53 discussed is the radiator. As many are, the X53 uses an aluminum radiator with a high FPI count. Overall the radiator is 123mm wide, it is 275mm long, and it is 30mm in thickness. The radiator does sport the NZXT name on both sides, and as expected, it is painted black.

The tubing that connects the head unit to the radiator is comprised of a pair of 400mm long hoses. The tubing is an ultra-low evaporation rubber, and from end to end, are covered in nylon braided sleeving.

Next come the fans, which in this instance is a pair of Aer P120 fans. These are 120mm by 26mm solutions, which range in speed from 500 to 2000 RPM, driving up to 73.11 CFM per fan! Static pressure is also relatively high at 2.93 mmH2O, and the noise levels are shown not to exceed 36 dBA. These fans spin on a fluid dynamic bearing, sipping power through the 4-pin PWM connections. The fans are said to last for 60,000 hours, which is nearly seven years of life, overextending the six-year warranty!

Compatibility is straight forward with these new units. On the Intel side of the fence, anything from the LGA 115X, 1366, 2011-V3, and 2066. With AMD, out of the box, it shows support for only AM4, with a mention of TR4, but the bracket is not in the box. There is no mention of how to obtain it, and we assume you would hit up support with proof of purchase to receive it.

The last thing you need to know about the Kraken X53 has to do with the cost. In the guide, we are shown the MSRP, which is set at this time at $129.99 on this side of the pond. For a new 240mm AIO, we do not feel that the cost is out of line, and with the latest features added, it may be a better deal than we are seeing it as, at the moment. We still have to go through this cooler with a fine-toothed comb before we make any definitive statements, but upfront, things appear to be good so far. 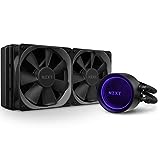