ID-Cooling has come forth with a reasonable RGB LED fan kit that will do just about anything you desire when it comes to lighting. We do wish they had more ability once filtered, and that the lights were a bit brighter, but for less than half of what others charge, it is hard to pass on the ZF-12025-RGB TRIO!

If the ID-Cooling brand is something you may not have heard of before, don't worry, you are likely not the only one. A relative fresh company to the game, ID-Cooling is better known for the variety of coolers especially the vast variety of closed-loop solutions that have been popping up over the past year or so. However, they do venture into other segments of the market as well, and if they are going to make RGB liquid cooling solutions, they may as well offer fans to go into the chassis that match what they offer on the coolers.

When it comes to a fan, it only has to do two things well, and everything else is gravy. A fan must add airflow to a chassis, and it must fit into a specified mounting location. In the early days of chassis cooling, you got a plastic frame which mounted directly to the chassis with no design implementations to eliminate vibrations, and if you were fortunate, you got a fan with a single color of LED lighting. As of late, a whole new world of RGB everything has infiltrated the PC market, and it seems that if a company is going to offer chassis fans, they better have a full line of RGB fans, or most customers are going to pass them by.

ID-Cooling has sent over the ZF-12025-RGB TRIO for us to have a look at. In a single box, you are given three 120mm fans, which have rubber dampeners on the fan frames, they have rings built into the frames which can be illuminated, as well as shipping with a remote control to change colors or patterns on-the-fly without the need for software. As we typically do, we will be getting up close and personal with what you receive, we will be voicing our opinion, and of course, we will have a video which shows off what the ZF-12025-RGB fans are capable of. 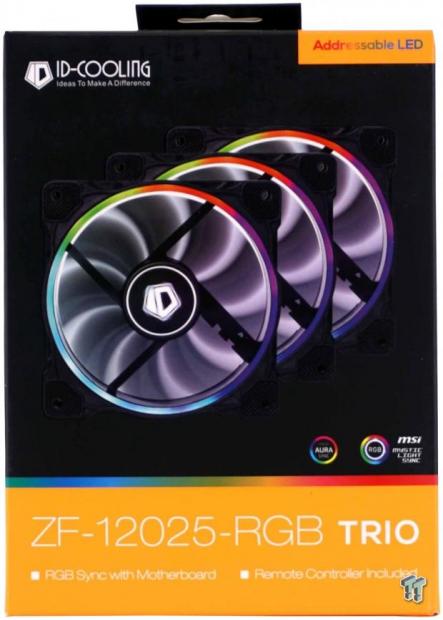 ID-Cooling packs the ZF-12025-RGB TRIO into a black and orange box, which if on the shelf would certainly attract attention. The front panel of the packaging offers a view of three 120mm fans which are illuminated, but also points to things like addressable LEDs, motherboard compatibility for RGB Sync, as well as mentioning the remote to control them. 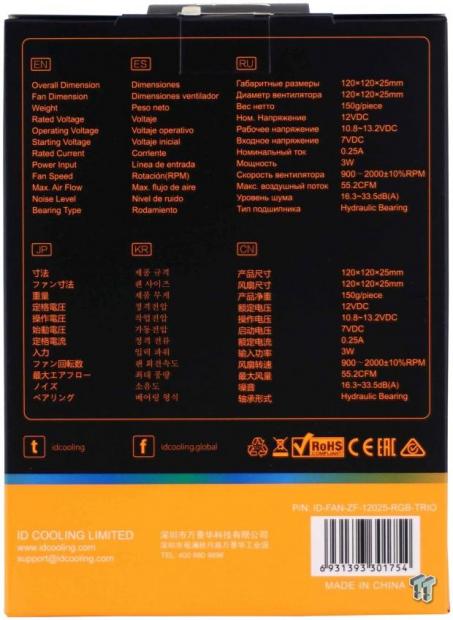 The back of the box offers the specifications in six languages, but all use the same English explanations on the right side of the charts. In the specifications, we see the 120mm size and the 150 gram per fan weight. Beyond that, we see the power requirements along with the 2000 RPM maximum of this kit, the 55.2CFM, and the 33 dB(A) noise rating. If you want to know about the static pressure, you need to visit the product page to see the 2.13 mmH2O listed there. 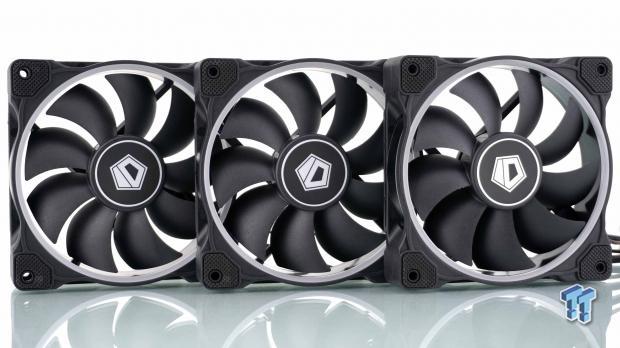 With the fans out of the box, we see a few things worth mentioning. Each fan has nine black blades surrounded by a black frame, which is an opaque plastic ring, where the RGB LEDs are hidden. It is also easy to see the textured rubber pads in the corners of each fan, which is found on both sides, and is there to illuminate any sorts of vibrations the fans may introduce into a chassis. 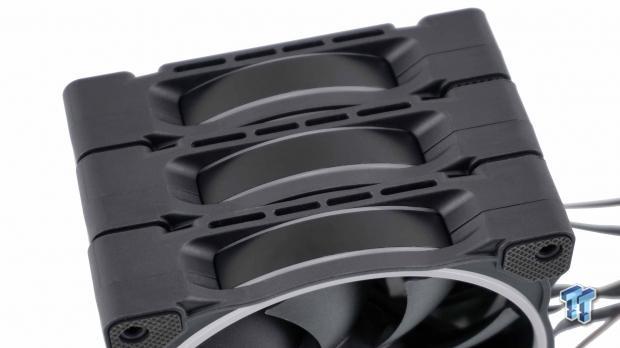 Looking down at the ZF-12025-RGB fans we can see that the opaque plastic is used on both sides of the fans, so that whether used for intake or exhaust, the lighting effect is still visible. Also, with bits of the RGB rings exposed from the sides of the fans, the lighting can be seen from all angles, not mater the usage or installation orientation. 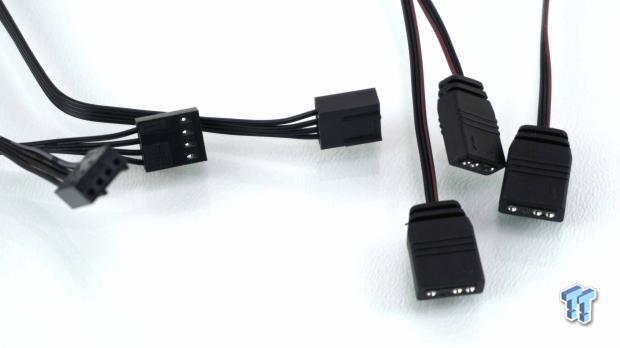 Each fan in the kit needs a pair of connections to be made. Each fan has a 4-pin connection for fan power, which makes this a PWM controlled group of fans. The second connections are what we typically see for RGB connectivity, but only three of the four pins are used. 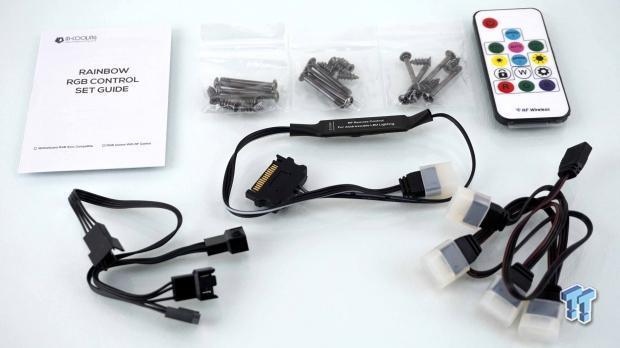 There are more goodies inside of the box to get the kit running and illuminated. There is a guide on how to connect everything for the novice builders, a full assortment of screws for various mounting locations, and even a remote control. At the bottom there is a fan power splitter to allow all three fans to run from one motherboard headers, there is a SATA to RGB connector which is an RF receiver, and there is also a splitter cable for the RGB 4-pin connectivity, which can go on the motherboard, or connect to the receiver.

When it comes to installing the ZF-12025-RGB TRIO kit into the chassis, there is one major point that needs to be addressed. You can either have software control via the motherboard, or you can control the fans via the remote control, but you cannot have both at the same time. Connectivity vie the motherboard will make the system seem more unified, but you will lose some of the patterns that the fan is built to do using the "auto" button on the remote. You may also want to keep some zip-ties handy when installing this set of fans, as there is a fair bot of wiring that needs to be run, and most of us do appreciate a tidy looking PC. 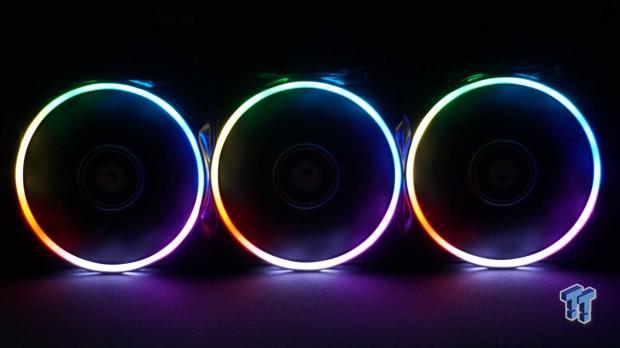 After the installation is complete, the fans will come to life with a ring of LEDs illuminated in various colors, working themselves around the frame of the fan in a counter-clockwise motion. With the PC at idle, the fans cannot be heard from a foot away, but once allowed to stretch their legs, the hum coming from them could be a concern to some. Controlling the fans with the remote allows for solid color options as well as mode selection, an "auto" setting, and even has the ability to dim or brighten the LEDs as well as controlling the mode display speed.

For those connecting a kit like this to the motherboard, you would eliminate the RF receiver in that process, and are then limited to what ASUS, MSI, AsRock, and the various others offer with the motherboard control of RGB lighting. With 55CFM of airflow, many newer open interior designs in cases will benefit from such an addition, but once behind a fan filter or a closed off front bezel, cooling performance can suffer a bit. Even with over 2 mmH2O of pressure, it can be reduced by unforeseen restrictions in the chassis design.

The one major thing that we have not discussed yet is the cost, and we feel that many will be pleased with what is being offered from ID-Cooling. While many of the fans we have tested previously will set you back near $100 for a set of three fans, which we thought was a bit ridiculous, ID-Cooling takes a different path. As we look for them today, we see that Newegg has them listed at just $44.99.

While ID-Cooling may not be the first name in fans, with similar specifications to the fans tested before this, and only the fact that the lights on previous kits were a bit brighter, we see no reason to pass on the ZF-12025-RGB TRIO. In this kit, you get all of the functionality the other kits bring to the table, without the need for software beyond motherboard RGB capabilities, they cater to those without motherboard RGB controls, and do it for less than half the price of everything else we have seen to date.

If you are in the market to fill a chassis with RGB fans, the ZF-12025-RGB TRIO is a set well worth your attention, and you can get double the amount of fans for a similar price to those kits released from the big players in the cooling game.

The Bottom Line: ID-Cooling has come forth with a reasonable RGB LED fan kit that will do just about anything you desire when it comes to lighting. We do wish they had more ability once filtered, and that the lights were a bit brighter, but for less than half of what others charge, it is hard to pass on the ZF-12025-RGB TRIO!