The Athena-EX comes packed with features including MU-MIMO, BoostBand, and all the high power amplifiers that would fit in the box. It does command a much higher price tag than many competing solutions, so it's really up to you if you need AC2600 technology.

After being relatively silent last year, releasing just a few products here and there, Amped Wireless is now on the ball launching their flagship AC2600 solution dubbed the Athena followed by the extender we have in house today, the Athena-EX.

The Athena-EX in its basic form is the same platform deployed with the Athena router. At its heart, we have a Qualcomm platform that offers 800 Mbps on the 2.4GHz band and 1733 Mbps on the 5GHz band. Additional technologies such as BoostBand and MU-MIMO allow for better streaming of content from more users simultaneously. With this device being an Amped Wireless solution, it carries 16 onboard amplifiers which along with its four antennas can give you an additional 15,000 square feet of Wi-Fi coverage.

The Amped Wireless Athena-EX is compatible with all wireless routers and carries an MSRP of $219.99 with a one-year warranty. 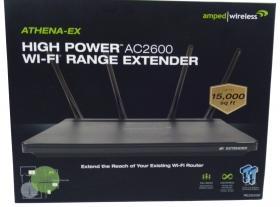 Packaging for the Athena-EX follows everything we have seen from Amped Wireless in the past. The center gives an image of the extender while marketing is very minimal.

On the end cap, Amped has placed a comparison chart for you to see how this solution stacks up. 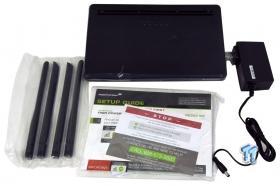 The scope of delivery is quite solid with reading materials to start things off, and the power adapter and antennas are followed by the extender itself.

With the Athena router taking on the shape of the Titan AC1900 solutions, the Athena-EX looks a bit more like the Artemis router, which we will get to in the next few days. For me, I prefer the slimline design of the EX over the rounded more compact Athena router.

On the end, you will find the USB 3.0 port for connecting USB storage.

The backside of the EX houses power to the far left followed by USB 2.0 and four LAN ports. To the far right is the LED on/off, WPS and reset buttons. 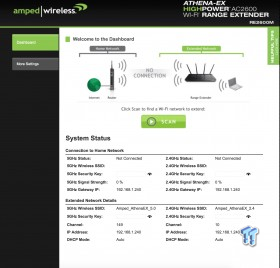 The dashboard for the EX uses a wizard feature for setup. 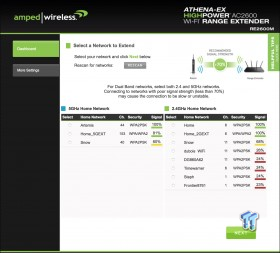 Using this feature, it first scans local networks for an available Wi-Fi connection and then shows you the results. As you can see, there are only a few within the acceptable green range. 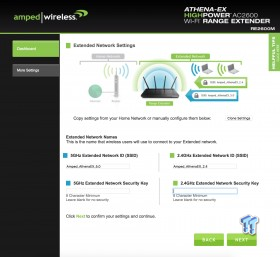 After selecting the network you wish to extend, you can choose to setup the Athena-EX with new SSIDs or let the extender choose. 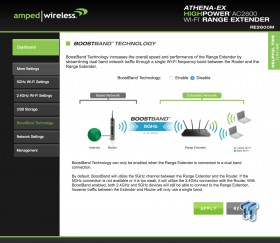 As I mentioned previously, the EX takes advantage of BoostBand technology along with MU-MIMO. 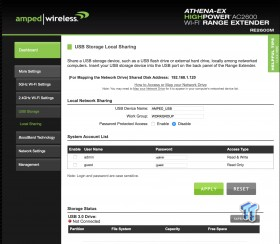 Above, we have the menu for local sharing which can be configured for the USB ports. 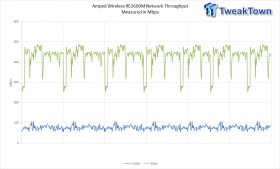 On to performance testing, the 2.4GHz band pushed through 100 Mbps of throughput while adding in the most range. The 5GHz band was very near 500 Mbps topping out at 463 Mbps.

Build quality, as mentioned above, is quite solid and with its slim and elongated design, which adds to the appeal. The performance was above expectations in 5GHz testing, as the EX topped 460 Mbps. On the other hand, the 2.4GHz band, while it did offer a much better range boost, was only able to achieve a touch over 100 Mbps.

Overall, the Athena-EX is one of the better extenders I have tested, and if you can save enough pennies or manage to hide a $200+ purchase from the wife, then this solution is certainly worth a look.

The Bottom Line: The Athena-EX comes packed with features including MU-MIMO, BoostBand, and all the high power amplifiers that would fit in the box. It does command a much higher price tag than many competing solutions, so it's really up to you if you need AC2600 technology.