ViewSonic has been in the computer display market for a long time, but has only recently stepped into the computer market. The company has a few ultraportable machines that include some really good models and a few that aren't so great.

Along with the ultraportable market, ViewSonic also entered into the All in One (AIO) market as well with a line of AIO machines that are based on netbook hardware. Today I am looking at one such machine with the ViewSonic VPC190.

This AIO machine has some interesting features and is a slim and compact machine. If you are in the market for a new computer and you think an AIO might do the trick for you, read along as I see what the ViewSonic VPC190 is made of.

The ViewSonic VPC190 AIO desktop PC I am looking at today is a lower priced machine that can be had for around $580 online. The machine has a 19-inch screen and the full specifications can be found below. 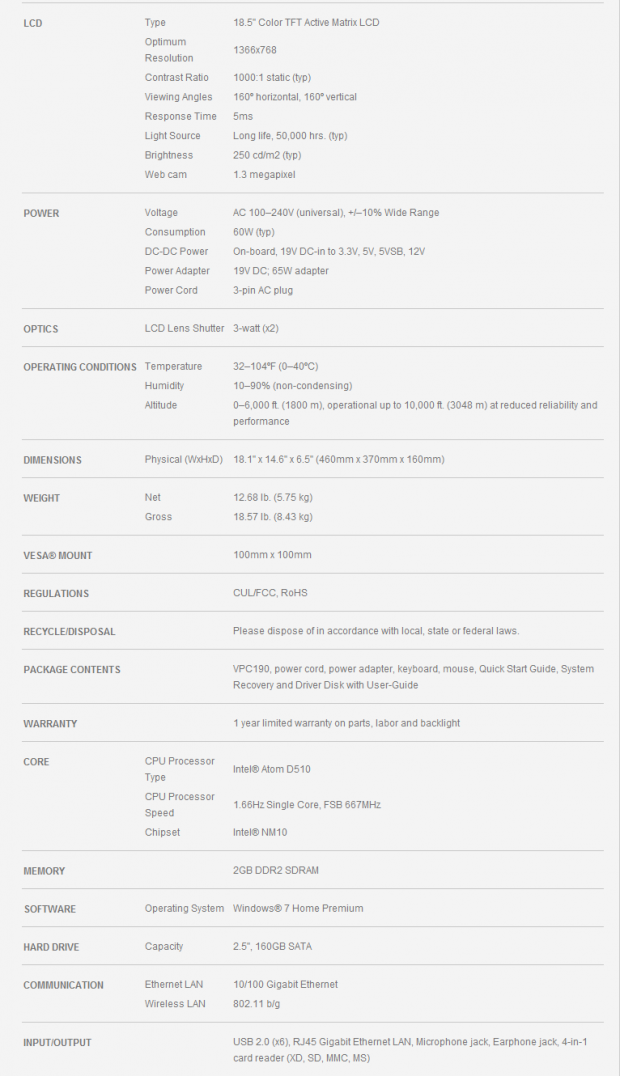 If you read many of my notebook and netbook reviews, you know that I loathe the glare that glossy screens bring with them. Imagine how thrilled I was to open the ViewSonic VPC190 and see a matte screen. The front of the machine also has the webcam. 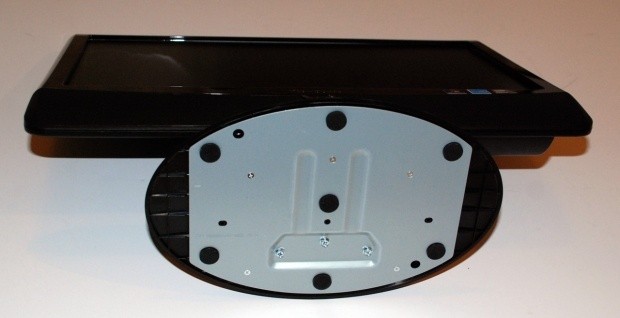 There is nothing on the bottom of the ViewSonic VPC190. The stand is removable with the three silver screws you see to fit the AIO into the box.

The left side of the AIO has four USB ports, the memory card reader and mic/headphone jacks.

The right side of the machine has the slot loading optical drive. 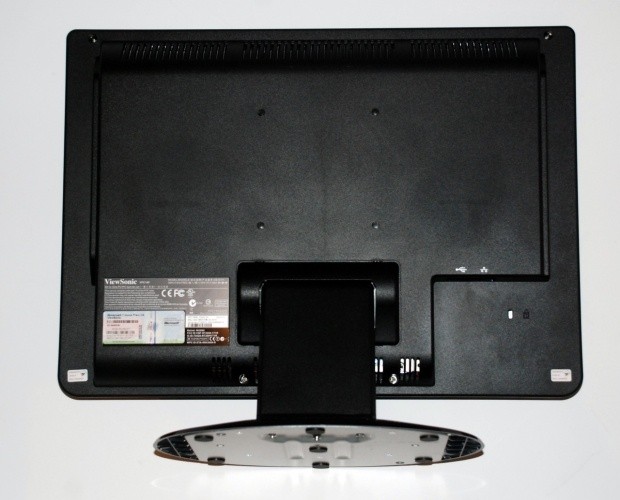 The backside of the machine has a Kensington lock port, two USB ports, an Ethernet port and some cooling grates. 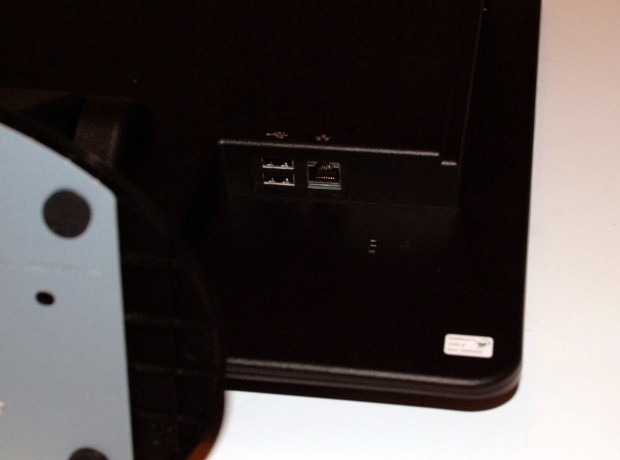 This is a close up shot of the USB ports and Ethernet jack.

ViewSonic includes a wired mouse and keyboard with the ViewSonic VPC190. 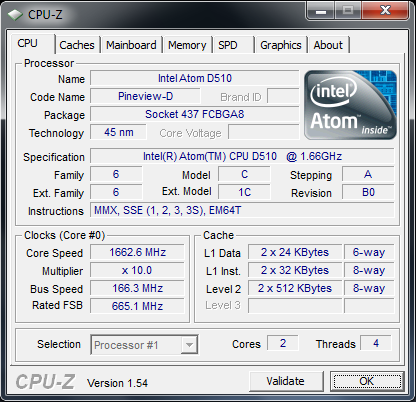 The ViewSonic VPC190 will be run through the standard AIO test regime here at TweakTown. This includes iTunes Encoding and Media Transcoding.


For the iTunes encoding test I take the Stone Temple Pilots - Core CD album in MP3 format and encode it to AAC format using iTunes and time the results with a stopwatch. 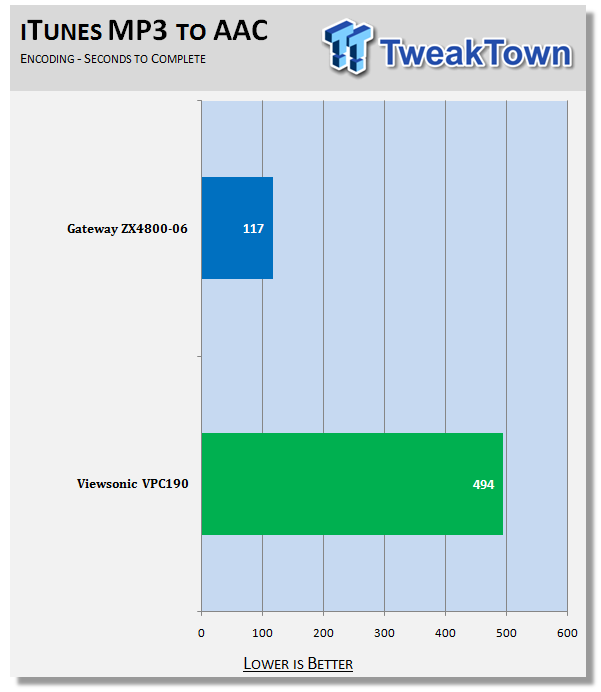 As you can see in the chart above, the ViewSonic VPC190 is much slower in this benchmark than the Gateway ZX4800-06 I tested recently. I suspect that this will be the average score in the new AIO category for us with rigs running netbook hardware. 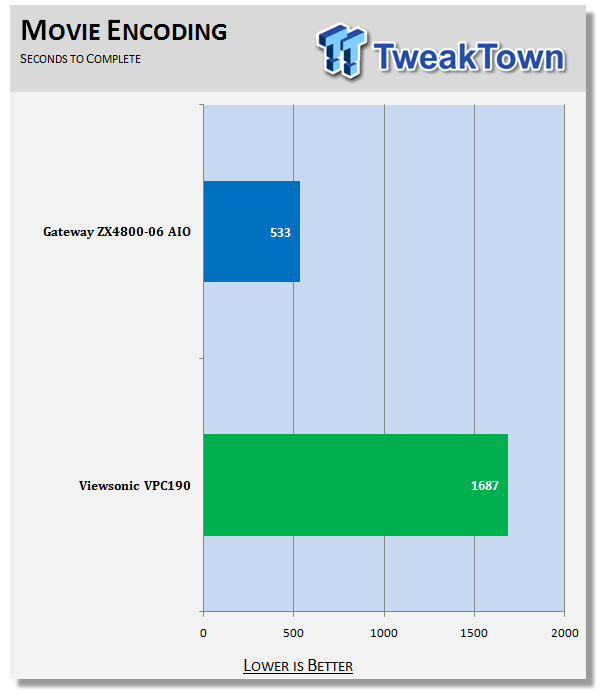 The ViewSonic VPC190 is the second AIO I have tested here at TweakTown and it offers significantly less performance than the Gateway AIO I tested before. This was expected, though, when you look at the hardware inside the ViewSonic VPC190 and realize this is really just a netbook with a big screen.


The ViewSonic VPC190 is not intended to be used as a multimedia machine or to do hardcore graphics or business workloads. The ViewSonic VPC190 is a machine that will be most at home in the home where it will check email and surf the web. This would be a great AIO for a kid's room or the kitchen where performance isn't the most pressing need.

ViewSonic ships the ViewSonic VPC190 with a wired mouse and keyboard. The mouse is very flat, but is accurate enough and has plenty of sensitivity for the 18.5-inch screen. The keyboard is narrow with a good layout and keys that have a good amount of tactile feel when pressed. The keyboard also has a number pad.

The best feature of the ViewSonic VPC190 for me is the matte finish screen. A matte screen is a rarity on a computer of any type today and it is fantastic for me to find one on this machine. ViewSonic used the matte screen knowing that this is not a machine that will be chosen for its multimedia duties. This is a machine that will be used for general computer work where less glare is much more important than better image quality.

In a pinch, users of the ViewSonic VPC190 may find themselves wanting to watch online video on the ViewSonic VPC190. The ViewSonic VPC190 simply lacks the muscle needed to smoothly playback video from sites like Hulu. The video was very jerky and unwatchable in HD resolution and SD resolution Hulu video was only slightly better. The sound system has enough volume that you can listen to the audio from your video or music and hear it. That said, as always the sound is flat and lacks bass and depth.

If you are in the market for an AIO, you have to go into the purchase decision knowing what you want. A lot of the AIO machines seem the same on the surface with similar screen sizes, but the hardware inside makes all the difference.

The ViewSonic VPC190 is a machine that is certainly capable of fulfilling the needs of the user looking to check email, surf the web and mess around on Facebook. If you are a video and multimedia fan, this is not the best machine for you. The performance of the ViewSonic VPC190 is on par with a netbook, which is much below what you can get in other AIO machines.

The good news is that the ViewSonic VPC190 is also priced more like a netbook than some other AIOs on the market. The ViewSonic VPC190 is more than $100 less than the Gateway ZX4800-06 I tested before. In the realm of things, that's not a lot of difference in dollars, but the performance gap between the two is huge.

Be sure you know what you want to do before you buy. The ViewSonic VPC190 is most appropriate for the user looking for a compact AIO machine for basic computing and little more.