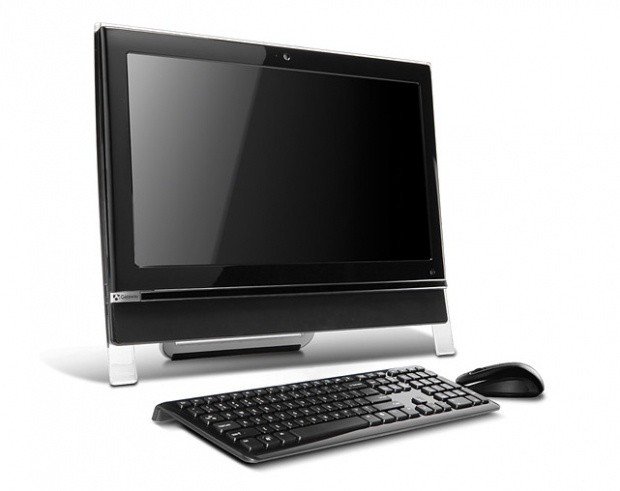 
Over the years many computer users have migrated away from desktop systems to laptops and netbooks as the price on portable machines has gone down. That doesn't mean there isn't a market for desktops, it just means the desktop market has shrunk over the years.

One of the hottest segments in the desktop PC market today is the All in One or AIO segment. These AIO machines cram all the hardware and accessories that are typically in a tower beside the desk in the case of the PC monitor.

The Gateway ZX4800-06 AIO I am looking at today has a big screen and decent hardware. Gateway offers lots of different AIO machines and this is a packed segment. The Gateway ZX4800-06 sells for $729.99 on Newegg.com right now. Check out the full specs of the AIO below. 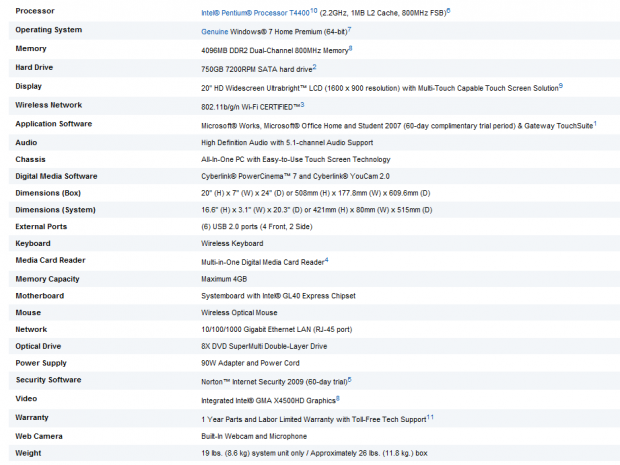 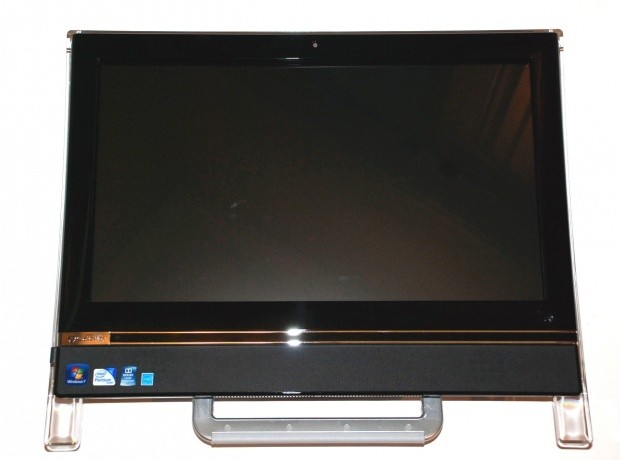 The front of the AIO is glossy black and the power switch is hidden under the Gateway logo on the left side. You can also see the webcam on the top.

There is nothing to see on the bottom of the screen but a cooling grate.

The left side has two USB ports and nothing else.

Again, not much to see on top of the AIO, but you can get a look at the attractive curved profile of the machine.

The right side has most of the stuff you expect to find on a PC. Here you see the headphone and mic ports, memory card reader and optical drive. 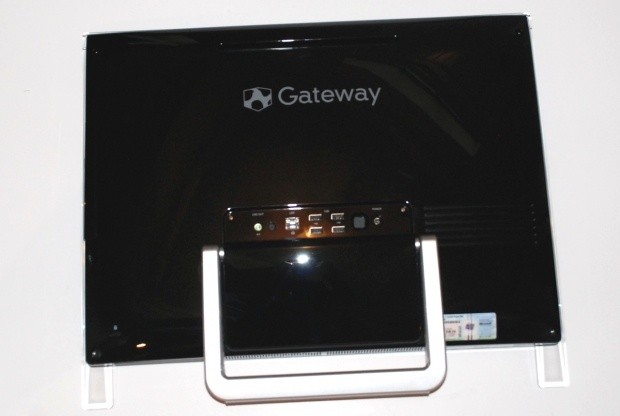 The shiny back of the Gateway ZX4800-06 has the line out port for external speakers, LAN port, the power plug and four USB ports.

Gateway includes a wireless mouse and keyboard with the AIO machine. 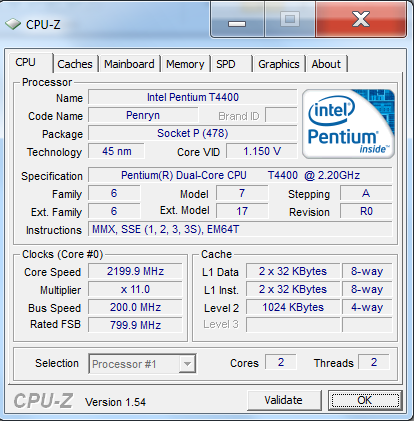 The Gateway ZX4800-06 will be run through the standard AIO test regime here at TweakTown. This includes iTunes Encoding and Media Transcoding.

For the iTunes encoding test I take Stone Temple Pilots - Core CD album in MP3 format and encode it to AAC format using iTunes and time the results with a stopwatch. 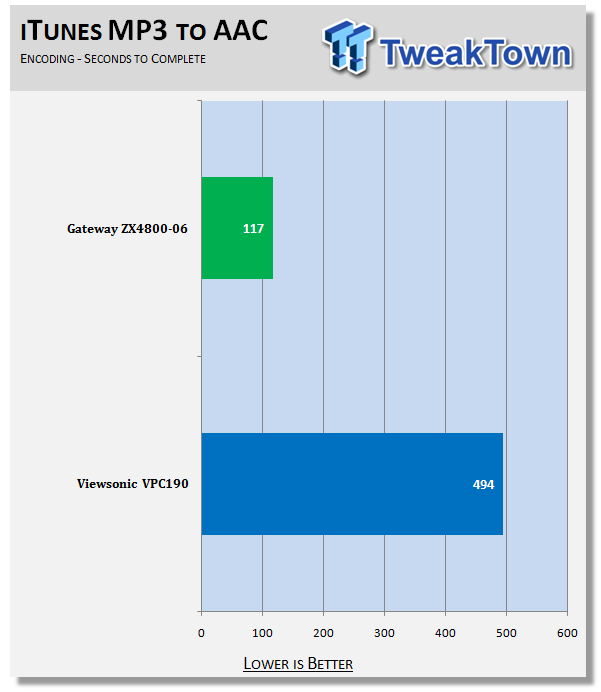 The Gateway ZX4800-06 was the fastest AIO machine I have tested so far, which isn't saying much considering this is the first review I have done on an AIO machine. As you see in the chart above, I do have a Viewsonic VPC190 AIO machine to compare to that will be featured in its own review soon. 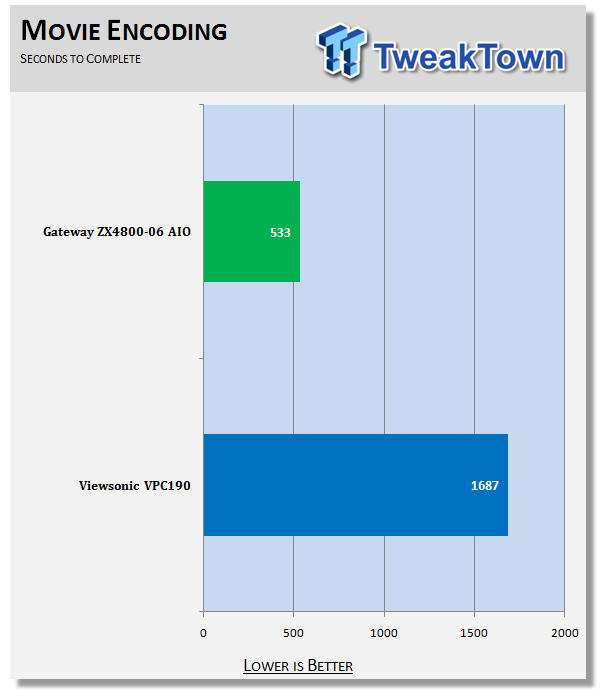 The moderately powered Gateway ZX4800-06 did decently in this benchmark. I don't have a lot to compare this machine to yet, but considering its mainstream price and hardware I expect that this benchmark score will ultimately be in the middle of the AIO pack as we add more machines to the charts later. 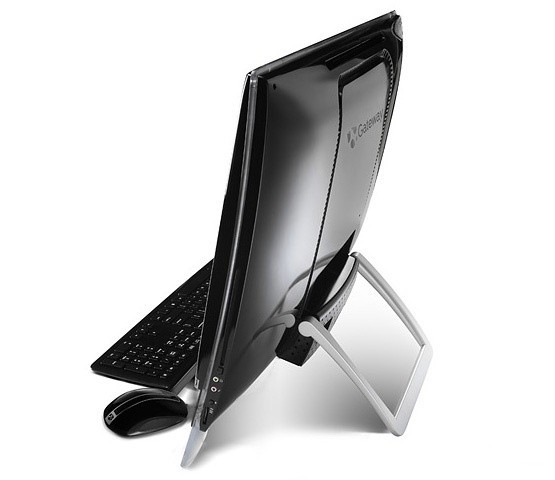 I really didn't know what to expect from an AIO machine given that this is the first AIO review I have done. A quick look at the spec sheet for the Gateway ZX4800-06 will tell you that this is a mainstream focused machine and after using the AIO for a while, it hits that mark pretty well.

The average computer user will find that the Gateway ZX4800-06 is capable of general computing tasks as well as any machine. The screen is big and bright with crisp graphics and enough space to get several things open on the screen at once.

I use a big 30-inch Dell display on my standard desktop and looking at the Gateway ZX4800-06 it's very impressive that every bit of the hardware needed for a full PC is crammed into a display case just about the same thickness as my Dell LCD. The machine looks fantastic sitting on the desktop and the wireless mouse and keyboard that are included add to the aura of minimalist design.

Speaking of that keyboard, it is thinner than your average keyboard and lacks a wrist rest. Thankfully, the keyboard is thin enough that despite not having a wrist rest you can type comfortably. The keys are well spaced and tactile feel is decent. A wireless mouse is also included with the Gateway ZX4800-06 and inside its battery compartment hides the USB adapter needed to connect the mouse and keyboard to the AIO PC.

Having to take up one of the six USB ports with a USB adapter for the included mouse and keyboard is very odd to me. How much harder could it have been to simply build the receiver into the computer so you don't lose one of the precious USB ports right off the bat? - I really appreciated the fact that the Gateway ZX4800-06 is dead silent. In fact, I hear no sound from it at all. It is likely passively cooled on the inside.

I briefly mentioned the screen earlier and I will talk about it in more detail now. The 20-inch screen has a 1600 x 900 HD resolution. It looks great with good colors and contrast, though it does have lots of glare. I fired up Hulu and went to watch some streaming video and found that HD quality video stuttered noticeably. The stuttering was bad enough that I would not have finished watching the video if I was so inclined. The stutter was less frequent on SD video, but was still noticeable.

The big touch screen has a touch layer built in. The touch properties of the screen are very nice and the screen is accurate in most instances. A few times I did have to touch a bit above where my eye told me the button I wanted to hit was. The onscreen keyboard works surprisingly well, but certainly won't replace the standard keyboard.

The onboard sound system was loud enough to hear music and other audio in a normal room environment without straining. However, the sound system has little bass and is focused towards the mid range mostly.

After spending some time with the Gateway ZX4800-06 I could certainly work from the machine without any issues. The Gateway ZX4800-06 isn't the best media focused machine out there, but hard core media enthusiasts won't really be looking for an AIO to start with.

The touch screen of this machine will make the Gateway ZX4800-06 a great kitchen PC or a PC for a secondary room where the aesthetics of the system are as important as the performance. The Gateway ZX4800-06 is a very attractive computer and performs well enough for most common computing tasks.

If you don't ask much from it in the way of multimedia use the Gateway ZX4800-06 will likely serve you well. The AIO is a solid offering aimed squarely at the mass market with a price that will make it a very attractive offering for users interested in a notebook simply for the reduced space needs of a notebook, but wanting a larger screen.

Hard core media fans, gamers and power users will need to shop elsewhere; the Gateway ZX4800-06 lacks the all around performance to meet the needs of these users.