MSI has leaked out an interesting new dual-chipset X670 motherboard, which is ready for the next-gen AMD AM5 socket (LGA1718) and upcoming family of Zen 4-based Ryzen 7000 series CPUs. 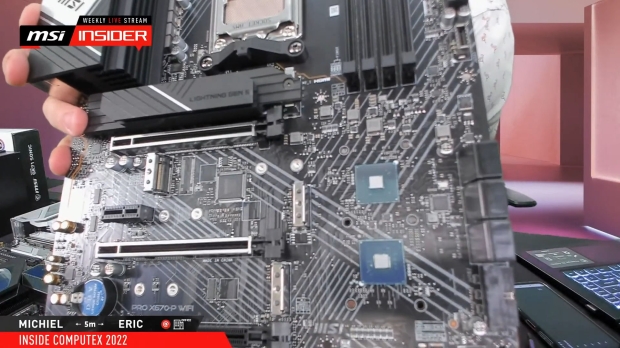 But the new dual-chipset motherboard was teased during the recent MSI Insider live stream, the company teased an AMD X670 chipset design that was not only passively cooled but rocked a dual-chipset design. AMD's next-gen AM5 platform will support CPUs of up to 170W PPT (socket power).

As for the AMD X670E and X670 chipsets, their dual-chipset design will have up to 24 PCIe Gen5 lanes -- which can be used for PCIe 5.0-based GPUs and SSDs. AMD's upcoming X670 chipsets can be passively cooled, and don't require cooling -- allowing for a more simple design of X670-based motherboards -- which is good for consumers and gamers alike.

We should see more concrete details on MSI's upcoming dual-chipset X670 motherboard in the near future, but it's great to see that we're already seeing this type of stuff BEFORE the boards have launched... and not in some second-gen or third-gen offering.