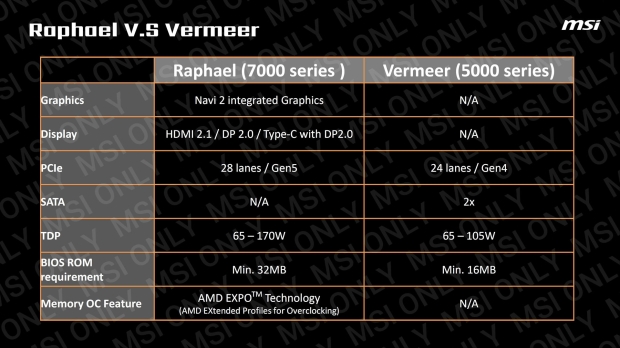 MSI outed AMD's new "EXPO" technology, which popped its head up inside of MSI's own X670 launch slides... but AMD didn't make a mention of it. MSI has asked other websites to remove the post, as it seems mentions of EXPO is triggering alarm bells for the company, or it could be completely wrong.

We have no idea what AMD's new EXPO technology is going to do exactly, but there are some things that AMD didn't share, that MSI shared through the leaked slides. We know that AMD is claiming just 24 PCIe 5.0 lanes, but MSI is saying there will be 28 PCIe 5.0 lanes (this could change, could be a mistake, or could be a future SKU).

You can see that there is a "TDP" of between 65W and 170W on AMD's new Zen 4-powered Ryzen 7000 series CPUs, and the 28 lanes of PCIe 5.0 goodness. Ex-TweakTown staffer Paul Alcorn tweeted not long after, saying that "AMD has confirmed that the 170W figure for AM5 is PPT, not TDP".