MSI is cooling its new MEG X670E GODLIKE motherboard with its Stacked fin array design heat sink, as well as a heat pipe that takes away heat in the middle of gaming or benchmarking. We have 4 x DDR5 RAM slots for up to 128GB of DDR5 RAM, as well as 1 x PCIe 5.0-ready M.2 slot (PCIe 5.0 x4) while there's 4 x on-board M.2 slots on the board. MSI even includes an M.2 XPANDER-Z GEN5 DUAL add-on card with the MEG X670E GODLIKE motherboard, giving you another 2 x more PCIe 5.0 x4 M.2 slots. 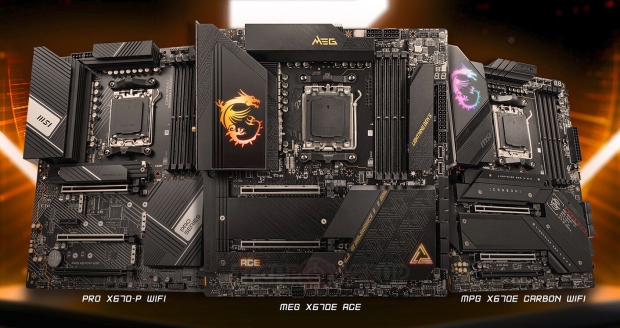 MSI explains: "Our MEG Series have more features than ever on our MEG X670E GODLIKE and MEG X670E ACE motherboards. The MEG Series adopt E-ATX PCB size and have up to 24+2 VRM phases with 105A Smart Power Stage. They are cooled by a Stacked fin array design heat sink as a well as a heat-pipe to dissipate heat effectively while maintaining at peak performance".

"There is also a MOSFET baseplate for more heat dissipation for the VRM while the Metal backplate is there to help protect the PCB as well as keeping the rigidity of the board. The MEG Series motherboards are equipped with up to 4 onboard M.2 slots including 1 M.2 PCIe 5.0 x4 slot and a M.2 XPANDER-Z GEN5 DUAL add-on card inside the box for 2 additional PCIe 5.0 x4 M.2 slots for ultimate experience".