AMD's new Ryzen 7 5800X3D processor is out in the wild, the very first consumer-focused CPU with 3D V-Cache technology. But... it comes at a cost. 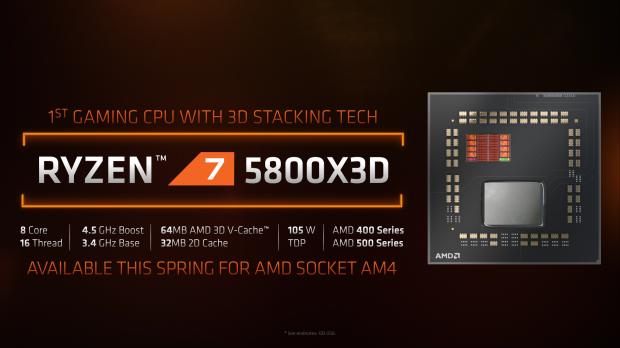 The new CPU has been torn apart and that gorgeous die shot has been shown, our first look at the Ryzen 7 5800XD chip. One of the most unfortunate things about AMD's new Ryzen 7 5800X3D processor is that it doesn't look like it has any OC (overclocking) support, whatsoever.

A post on the Chiphell forums by 'brother number one' said: "Information that can be disclosed so far: 5800X 3D does not support overclocking". But why? The 64GB of additional cache through the 3D V-Cache means that CPU clocks are lower on the 5800X3D, and the additional 3D-stacked cache gets hot underneath, and could reduce the CPU clocks too far -- or even damage the CPU.

Another factor to consider is that this particular Ryzen 7 5800X3D processor could be an engineering sample (ES) without overclocking support. The final retail CPU might have overclocking, but at this point, I very much doubt it.

AMD Head of Technical Marketing, Robert Hallock, recently spoke with PCWorld, where he said: "Frequency is important, frequency is important but every processor, every game is always a series of tradeoffs, bottleneck mitigations and in our architecture, when you are in the range of four and a half to five GIgahertz, four or five is enough when you put a ton of memory on top you know you are not limited by frequency anymore, you are not giving anything up to target that frequency, its the performance limiters or the performance accelerators move up, move elsewhere in the architecture so we can dial back on the frequency a bit ease up on the thermals, make it easier to cool and drop in a big extra blob of cache on top which is more transistor density, more thermal density so that's a trade-off that was very easy".