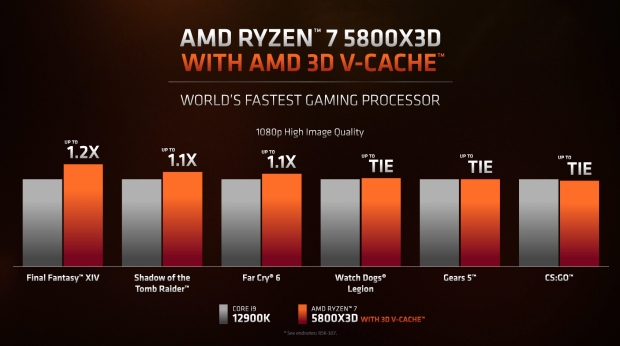 The new AMD Ryzen 7 5800X3D processor is the first to market with stacked memory technology, and works similar to how the RDNA 2-powered Infinity Cache does on the Radeon RX 6000 series GPUs, and has enough faster L3 cache that it actually beats Intel's just-released flagship Alder Lake-based processor in the Core i9-12900K.

AMD is expecting around 15% more performance thanks to the stacked memory, which means the new Ryzen 7 5800X3D processor is actually faster than AMD's higher-end Ryzen 9 5900X in gaming. Not only that, but the new 5800X3D beats the Core i9-12900K in gaming which is what really matters.

AMD will launch its new Ryzen 7 5800X3D processor in Spring 2022, so we're looking at sometime over the next 3-4 months or so... meanwhile, the next-gen Zen 4-based Ryzen 7000 series desktop CPUs will launch later this year, and into 2023 and beyond.