AMD unveiled multiple products and technologies out now, coming soon, and coming out in 2022 during its virtual Computex 2021 keynote. One of the highlights is the next-gen 3D V-Cache stack chiplet technology, check it out:

The new 3D chiplet technology will allow AMD to stack multiple chips onto each other, with the company showcasing a prototype CPU in the form of a modified Ryzen 9 5900X with 3D V-Cache and 64MB of L3 SRAM. It had a normal Zen 3 CCD right next to a 3D packaged CCD that measures in at 6mm x 6mm.

CCD sizes remain the same, but AMD drops another package on top of the CCD which packs 64MB of cache adding onto the 32MB of L3 cache on the Zen 3 CCD for a total of 96MB of L3 cache per CCD. With the two CCDs we're looking at a total of 192MB of L3 cache through the 3D stacking tech, versus just 64MB of L3 cache in stock form.

Not only that, but the 3D V-Cache is connected to the CCD through multiple TSVs, which AMD says the hybrid bond approach has over 200x the interconnect density, and 3x overall efficiency.

But what about performance? AMD ran the tweaked Ryzen 9 5900X prototype CPU with Gears of War 5, where it had 12% more performance which was helped by the boosted game cache size. AMD says that gamers should expect a 15% performance increase on average with its 3D V-Cache design.

AMD was already out and ahead of Intel, but man-oh-man this is just like AMD has strapped a jet pack to their back and blasted another few years down the track from Intel. Intel is like an old man huffing and puffing, unable to keep up with the super-reenergized AMD. 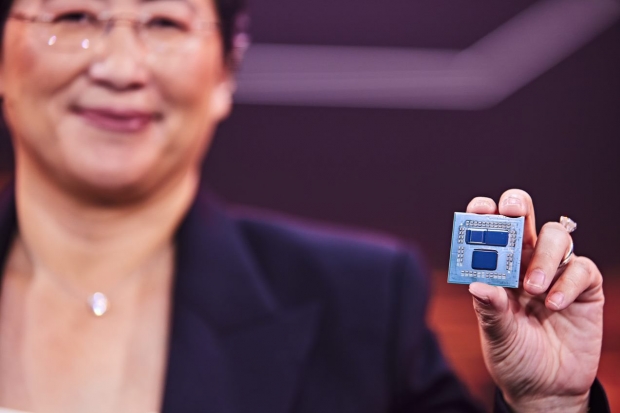