But get this... with dual 12-pin PCIe power connectors under its belt, EVGA's custom GeForce RTX 3090 Ti KINGPIN graphics card will have a theoretical maximum power consumption of up to 1275W. Yes, twelve hundred and seventy five watts. Compared to the EVGA GeForce RTX 3090 KINGPIN which has a 525W TDP, this is a gigantic upgrade of close to 750W with the new EVGA RTX 3090 Ti KINGPIN. Holy balls. 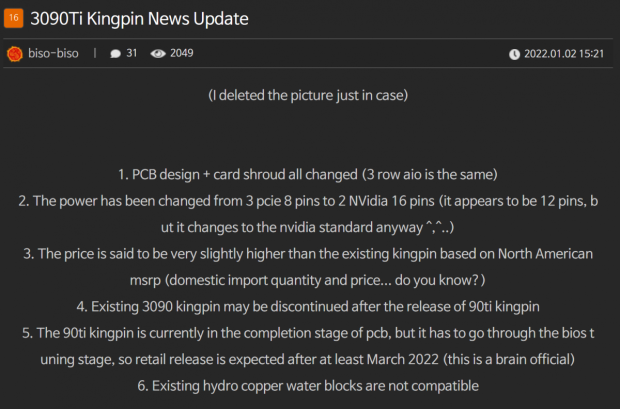 As for the new card and what to expect, the new flagship RTX 3090 Ti will feature 24GB of GDDR6X (the same as the RTX 3090) but new 16Gb single-sided modules, breaching the 1TB/sec memory bandwidth milestone -- a first for a GeForce GPU.