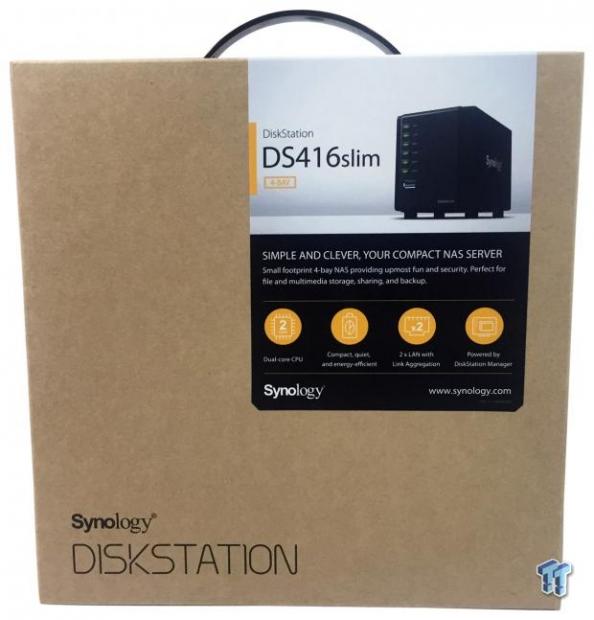 Most of the NAS products that make their way through the lab here at TweakTown are consumer two and four bay solutions. For most of you wanting to store your data and stream your content, these solutions are plenty adequate and at times overkill. While most will have the ability to make room for a full-size appliance, for those in the market wanting to save as much space as possible, there are very few options - and Synology has an answer in the DS416slim.

The DS416slim is the first NAS in a long time to come through without an Intel sticker on the box. Don't let that deter you though as this solution is based on a Marvell platform and they have been in the NAS market longer than Intel. Getting down to the basics, like I said above, is a Marvell platform and to be more specific an Armada 385 dual-core chip operating at 1GHz that sits next to 512MB DDR3 memory boasting a dedicated encryption engine.

Like previous NAS solutions from Synology, the DS416slim runs on the latest iteration of DSM and at the time of review this means all testing will be done on version 6.0.2. This also means, even with the small footprint of this device and its ARM architecture, you still get many of the same features as the bigger appliances. 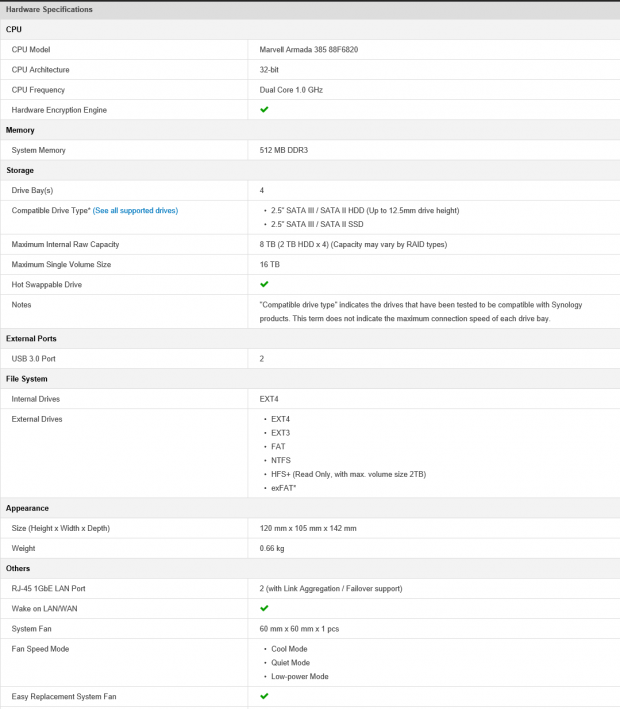 Specifications for the DS416slim start with the Armada 385 that we spoke of above, one thing to mention is the specifications for this exact SoC on Marvell's website, details a dual-core chip that operates at 2.0GHz, so it's feasible this solution actually operates at this higher frequency. Moving on, we have the 512MB of DDR3, again with a hardware encryption engine and four drive bays. I/O connectivity includes dual USB 3.0 ports along with dual Gigabit LAN.

So how much will this unit set you back? Well, the Synology DS416slim in its diskless form carries an MSRP of $289.99 with a two-year warranty.

The packaging starts of the same as any Synology appliance. We have a brown box housing a sticker that carries all the information about the NAS. 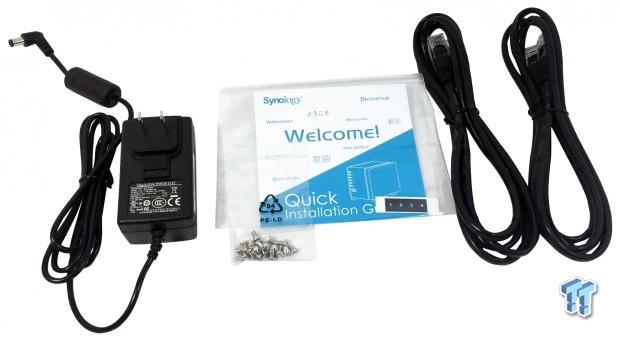 The scope of delivery of this appliance gives us two Ethernet cables, power adapter, and drive screws. 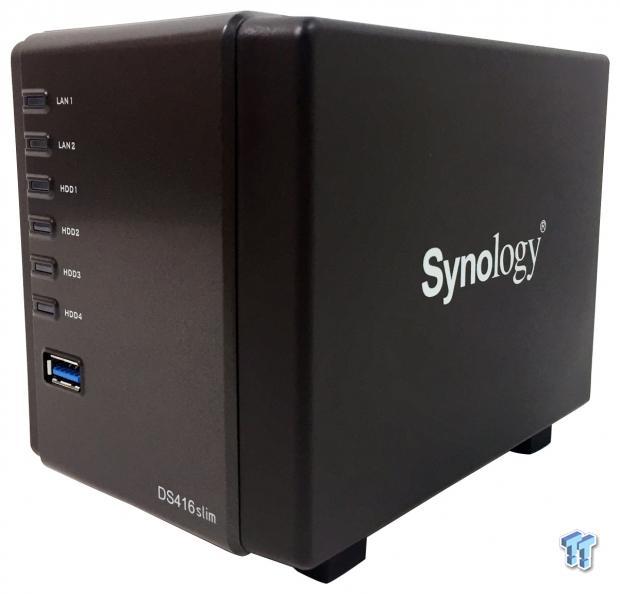 Pulling the NAS from the box, we get an idea of how small this device is. With that said, it still has many of the same exterior features that we find on the full-size appliances. This includes six LEDs across the front four of which show activity for the drives and the top two for LAN.

The backside houses the drive trays, which are plastic and do require screws to fasten the drives. To the right, we have both Ethernet ports with USB 3.0 above and power below. 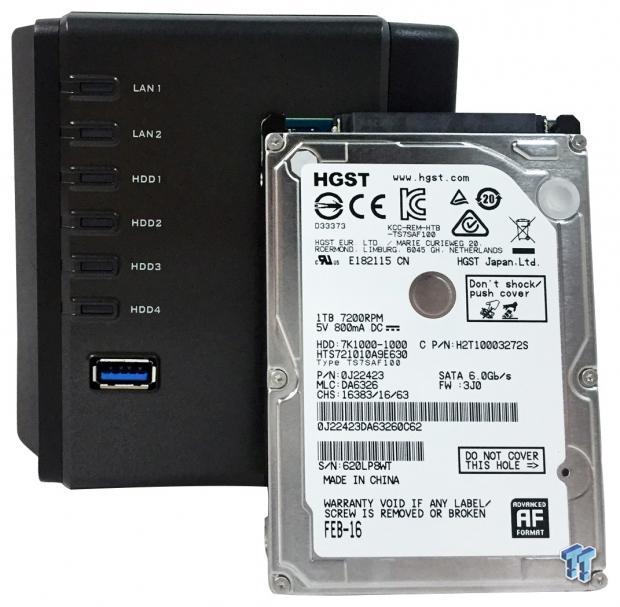 Internally, the backplane does have SAS cutouts although the Armada only supports the SATA interface. 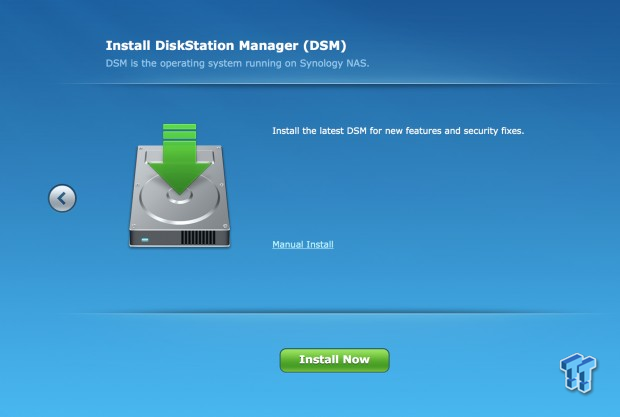 The setup hasn't changed at all for the slim. Above we go through installing DSM after drives have been secured. 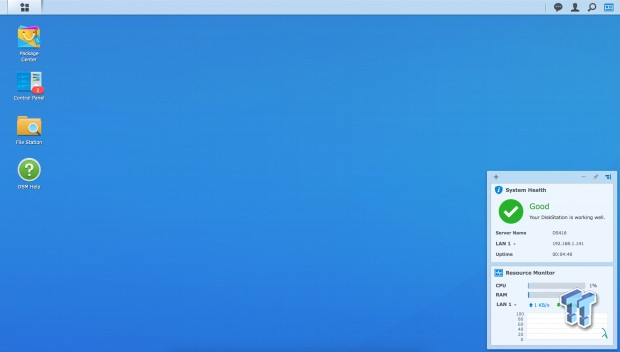 After initialization, we land at the desktop for DSM. To the left are a few icons to get you started while the right side has a quick health of your system. 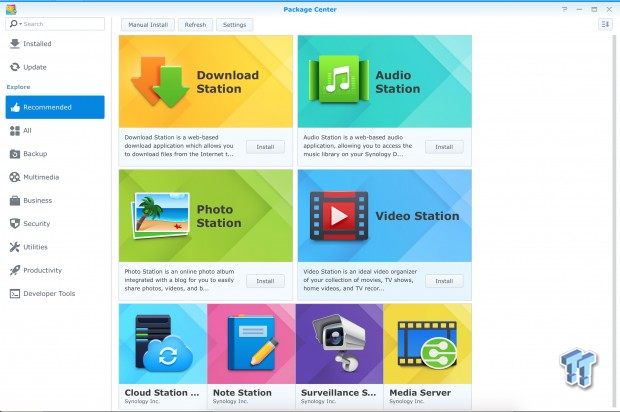 As far as apps are concerned, the 416Slim has many of the same apps as the larger systems. As you can see, we get our basics from Synology. 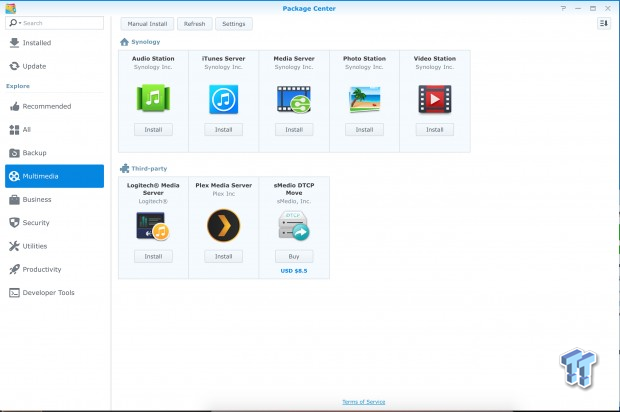 I was rather surprised to see Plex on the list of apps for the slim. 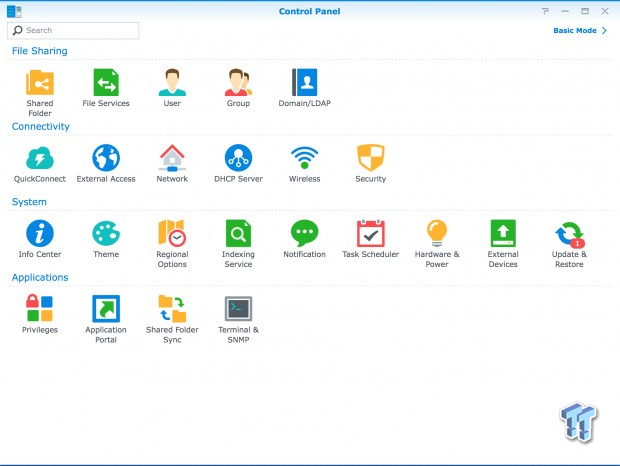 The control panel is pretty much the same for the 416slim.

One thing I have noticed over the last year of using Synology exclusively for my data is that they are constantly updating their appliances. I have, no joke, updated this slim three times in the three weeks or so I have had it running.

This can get a bit hectic if you have to update and reboot constantly. However, on the other hand, I'm happy they adapt to changes in the environment and release updates to fix any issues quickly. 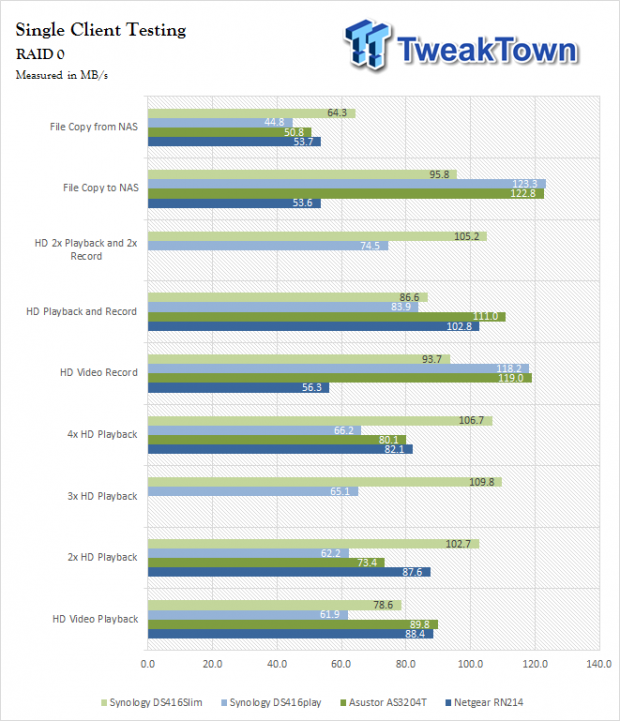 I'm almost certain you want to know how well this NAS does against the full-size Intel appliances. As I mentioned previously, this appliance is more of purpose-built storage and streaming solution, so I suspect it will do quite well. I started with RAID 0 as I normally do and it's quite apparent this solution has its strong points in multiple stream playback. 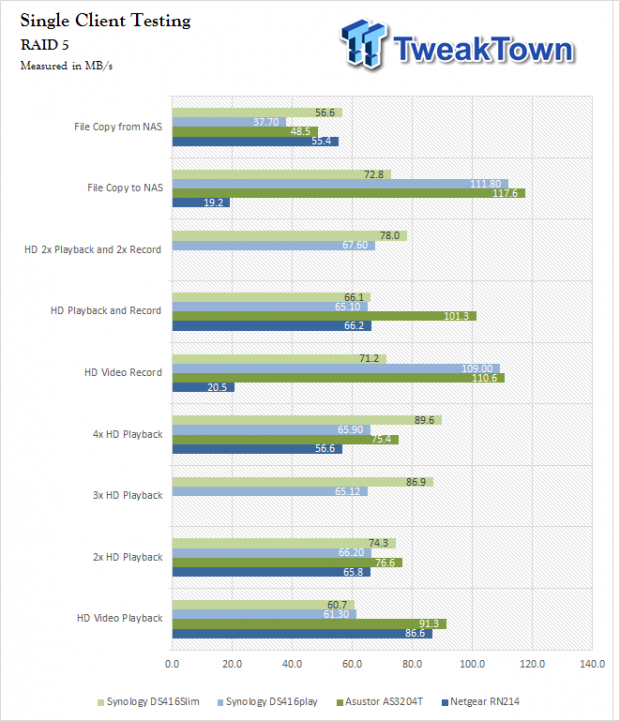 Moving over to RAID 5, I feel the device did rather well with the peak of performance in multiple streams while the lowest was in file copy operations. 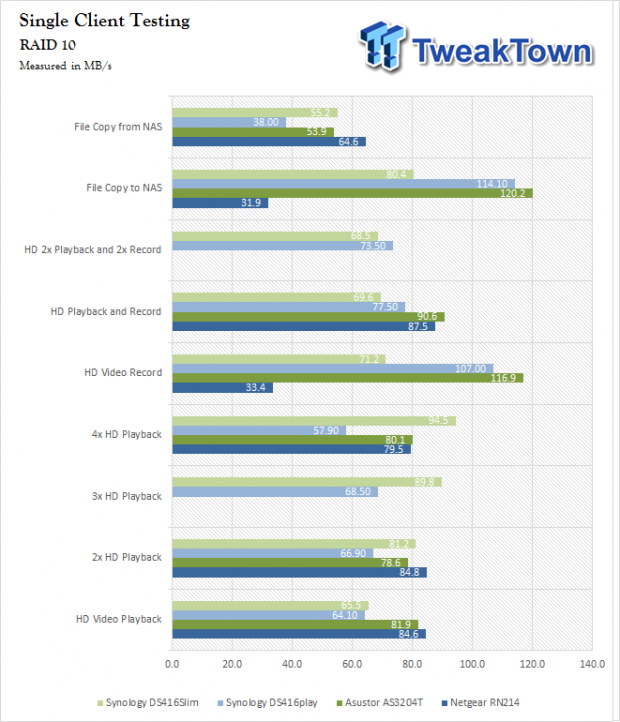 RAID 10 on this solution was again a solid performer. In two, three, and four playbacks, it produced some impressive number - at times higher than the larger appliances. Copy to NAS topped out at 80 MB/s and from the NAS was 55 MB/s. 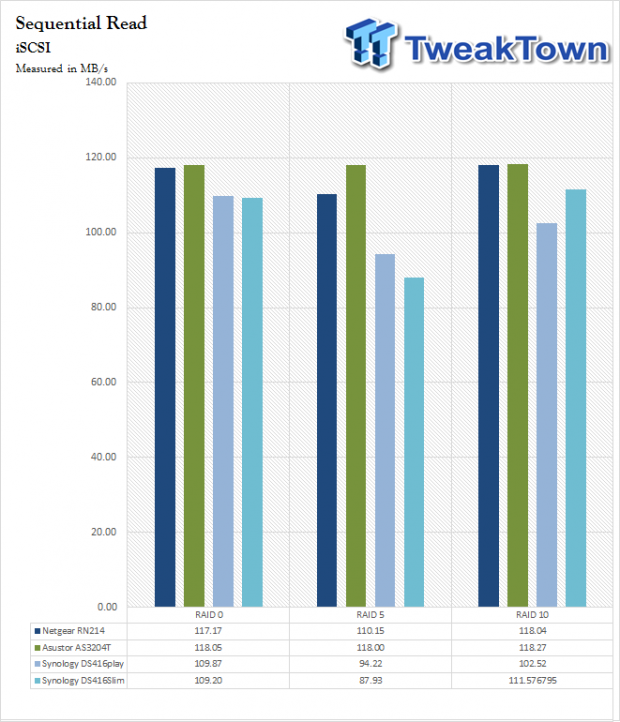 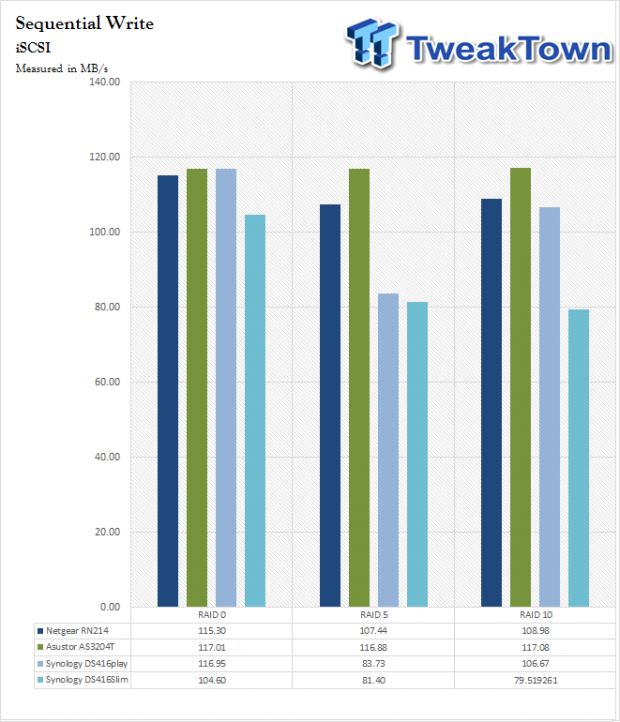 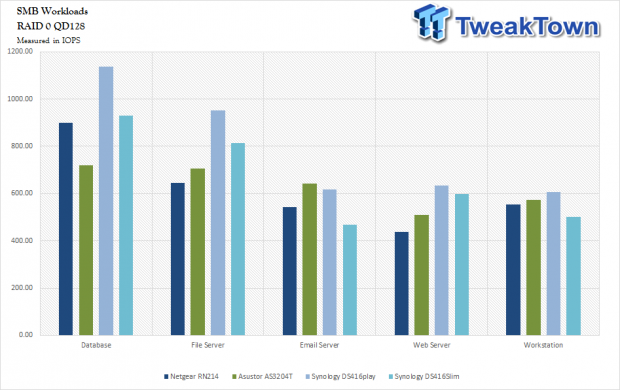 Workload testing is done using IOMeter at 128 QD. I run these tests at least three times for each array type. RAID 0, seen above was pretty strong in database, file and web server. 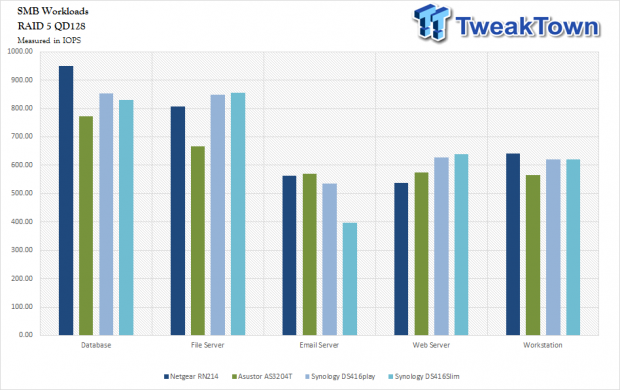 RAID 5 again made this appliance very competitive to the larger solutions. Even with 128QD, the DS416slim excelled through database at a touch over 800 IOPS, and web server just over 600 IOPS. 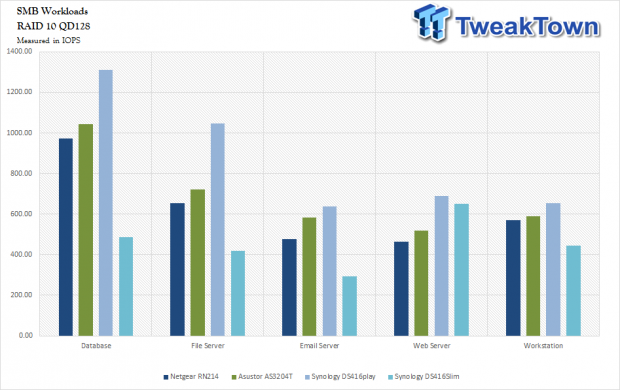 Moving over to RAID 10, the DS416slim just looked tired after all that work put in for the previous two RAID modes. It was barely able to reach 500 IOPs in database or 400 IOPS in email server.

Somehow earlier in the year around May I missed the release of this NAS. While I tend to stay pretty busy when I was doing some research on the DS916, I came across this solution and promptly asked about it. While many of you that already have a Synology appliance will have very little interest in a solution like the DS416slim, for those of you that don't need great amounts of storage capacity and want to save space but still have all the features, then this solution doesn't disappoint.

I was actually impressed by the single client results as the slim stayed right with the larger appliances in almost every scenario. Before we get too much into performance, let's talk about the quality of the unit itself. The exterior of the DS416slim is ABS plastic which lends a bit of durability thanks to its high impact resistance, and this covers a steel frame that adds structure for the drive trays and motherboard components.

The performance throughout most of my testing was rather good. It did fall off a bit in workload testing once we made it to RAID 10 but otherwise I was able to reach competitive performance throughout single client testing with peak sequential speed of 111 MB/s read and 97 MB/s write. It excelled in both Database and Web Server workloads in RAID 0 and 5.

With this appliance coming in at an amazing MSRP of $289.99 for anyone that has been wanting to get into NAS storage, this is a great place to start with DSM and get acquainted with all of the features and possibly move on to a larger appliance if/when the need arises.

The Bottom Line: Synology's DS416slim is a great appliance for consumers wanting a space saving solution without sacrificing the performance needed for streaming content or data storage.