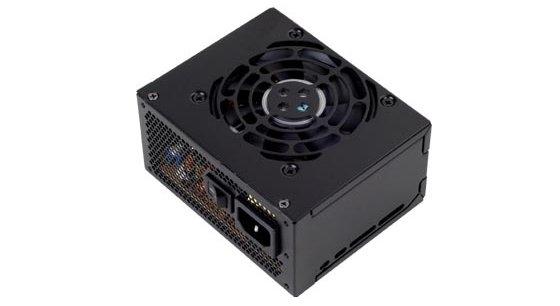 For the longest time, the PC industry experienced a steady climb in the power requirements for anything beyond a generic office PC. Most of this was due to the requirements of the GPU. As GPUs evolved, they steadily became more powerful. When NVIDIA resurrected multi-GPU computing, there was an even larger spike in power needs, as multiple modern video cards hadn't been seen before. Thus came the surge of the Kilowatt unit.

As time went on, more powerful cards became available, alongside motherboards and processors that required more and more energy. Triple and quad GPU systems pulled power well beyond 1000W, and power requirements were out of control. Eventually, something had to be done, and of course it was. Manufacturers all around began to reduce power requirements slowly, but surely.

Fast forward to now, and you find that there are a number of manufacturers that have done a fantastic job of reeling in the power requirements of their products, while increasing performance. Haswell, Tahiti, Hawaii, and more, are all doing more for less. As a result of all this, you now find that the Kilowatt unit is not needed nearly as much as it used to be. Power supplies in the 500W-700W range are more than enough for most, and if you're looking at entry-level systems, you can get away with much less power.

This is why we've got the SilverStone ST30SF on our bench today. It is a 300W unit that is packed with the quality the SilverStone name implies, along with just enough power to get the job done for an entry-level system. It may not sound like much, but when you consider that some lower-end processors only require 35W, there is still a lot of room left over for other pieces. I'm sure it still sounds somewhat skeptical that a 300W unit can power a somewhat decent gaming PC, so let's just start by looking at the specifications. 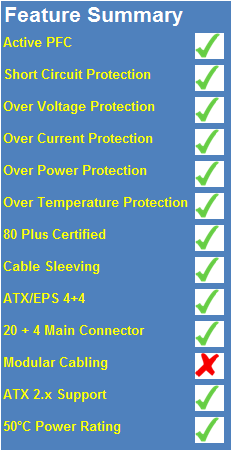 On something that would be considered as low-end as the SilverStone ST30SF, you would expect quite a bit more missing from the summary table. SilverStone doesn't see it that way, as they have made sure that the ST30SF is as full of features as they can make it. They have included a full suite of protections, including SCP, OVP, OCP, OPP, and OTP. The one area that this unit doesn't deliver is modular cabling. All of the wires are native to the unit, and cannot be swapped out, or removed. All of the cables are sleeved; however, they are only sleeved about three quarters of the way. Surprisingly enough, the ST30SF is rated for 100% continuous output at 50C. The ST30SF has an 80 PLUS Bronze efficiency rating.

SilverStone's ST30SF has an MSRP of $49.99. The cheapest we can find it for at the time of writing this article is $60.93 after shipping, at Newegg. Even though that's above MSRP, it is still a great price for a quality unit. SilverStone backs the ST30SF with a three-year warranty. 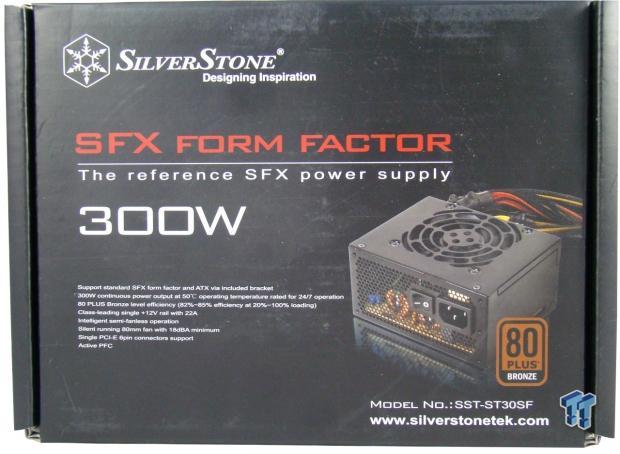 Although it is quite hard to tell, the ST30SF comes in an incredibly small box. This is in part due to it being an SFX unit that has very small dimensions. It also doesn't have a ton of cables that require extra room stuffed into the box. 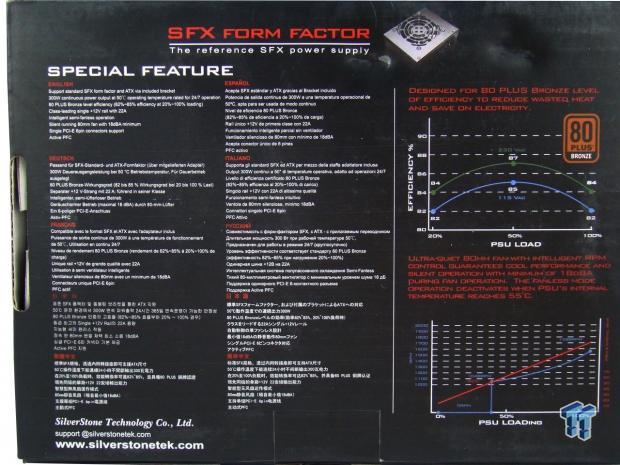 The opposite side gives a brief list of features in many languages, along with efficiency and fan charts. It is worth noting that the power supply operates fanless until the internal temperature reaches 55C.

This side gives us the connector availability for the ST30SF power supply.

Spinning things around, we find that the I/O specifications can be found here. 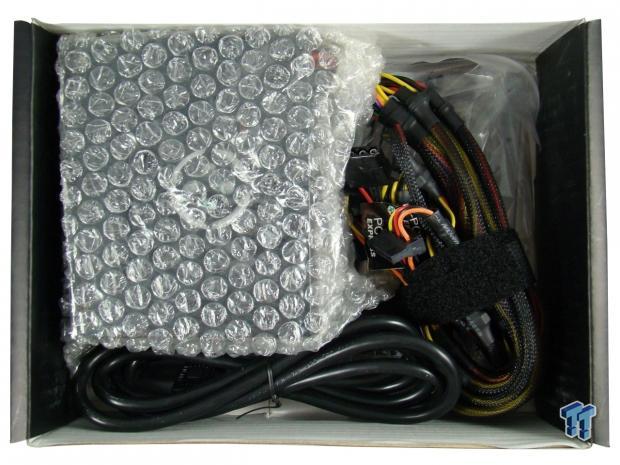 Cracking the box open reveals that there is little inside; including protection for the unit during shipping. The only protection the unit receives is a thin layer of bubble wrap. 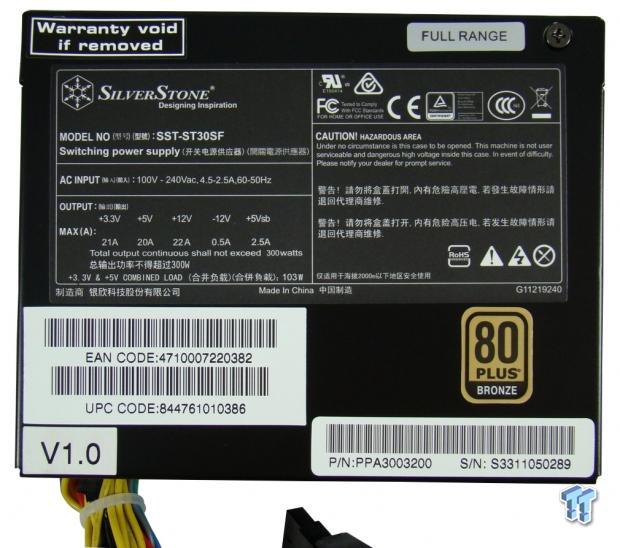 All stickers and labels are on the top of the ST30SF. Here you can find the I/O specifications, serial number, 80 PLUS efficiency marking, and barcode for the power supply. It doesn't leave much of the unit itself to be seen. 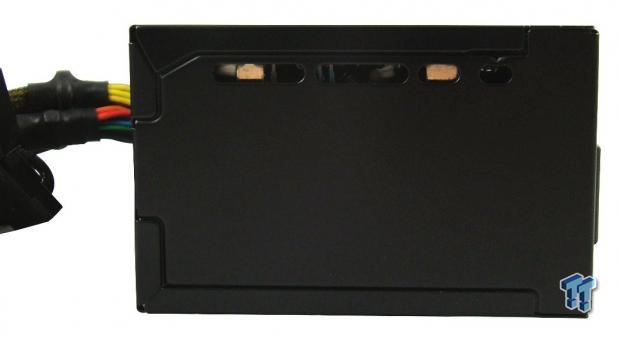 Both sides are blank though, revealing the semi-gloss black finish on the unit, along with a few extra vent holes for improved cooling. 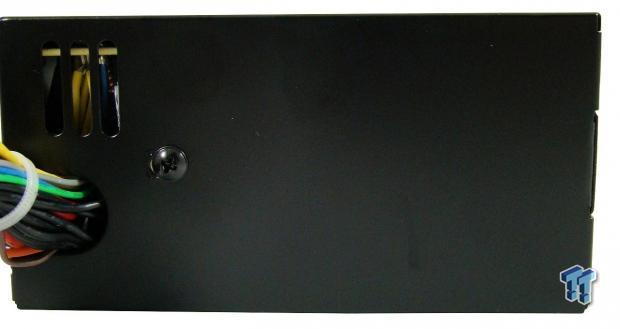 The front has a few more vent slots available as well. One thing that I did not expect to see from this SilverStone unit is that there is no grommet around the hole where the cables exit the power supply. It is even more necessary in this case, as the cables aren't fully sleeved. 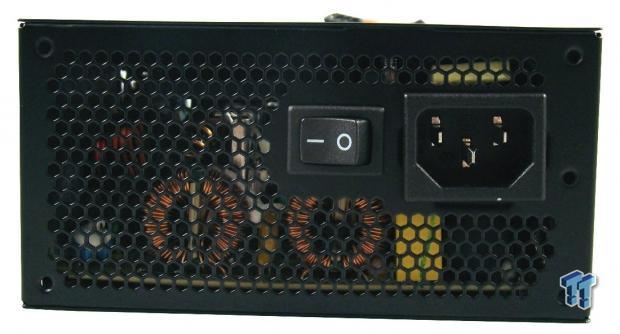 The back of the power supply looks great. It features a honeycomb mesh grill, with an on/off rocker switch, and AC input. This design offers minimal obstruction to airflow. 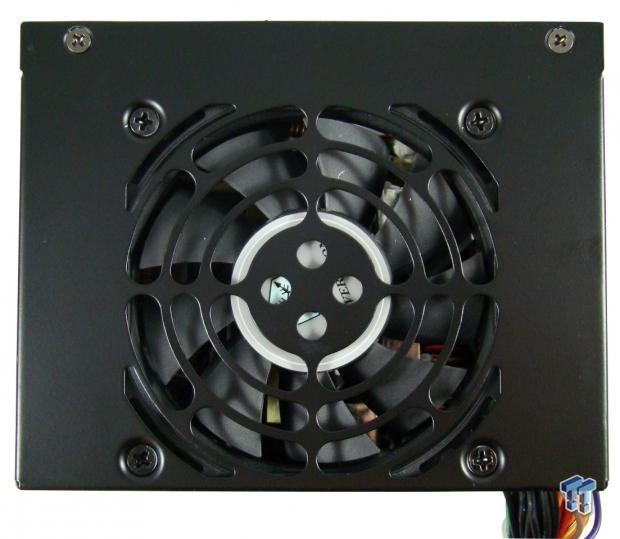 The bottom of the SF30SF features the 80mm fan that cools the power supply. 80mm fans are known for their noise, but SilverStone promises this one isn't too loud. 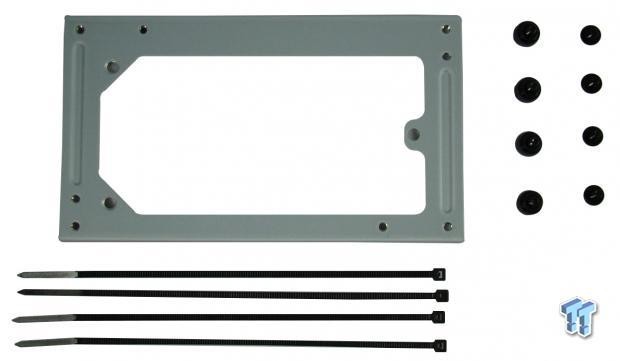 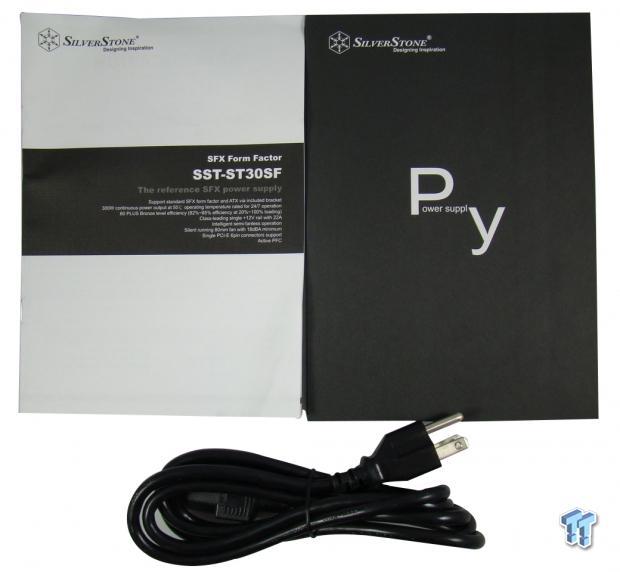 Rounding out the contents of the box are the user manual, generic power supply manual, and AC input cord.

Since the ST30SF is only a 300W power supply, the cable summary isn't going to be incredibly long. The ST30SF gives just enough to get the job done, and there isn't any reason for anything more. There is a single PCI-E connector, which means there are a large number of GPUs that you cannot use with this power supply. There are three SATA and two Molex connectors, along with a single FDD connector if there is anything still in existence that requires it. 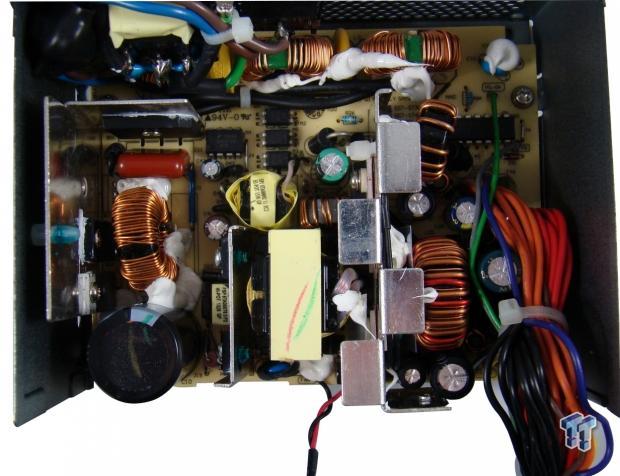 Saying that the ST30SF is small is an understatement that becomes even more apparent when opened up. A simple bent piece of aluminum acts as a heat sink, but it's more than sufficient to get the job done. 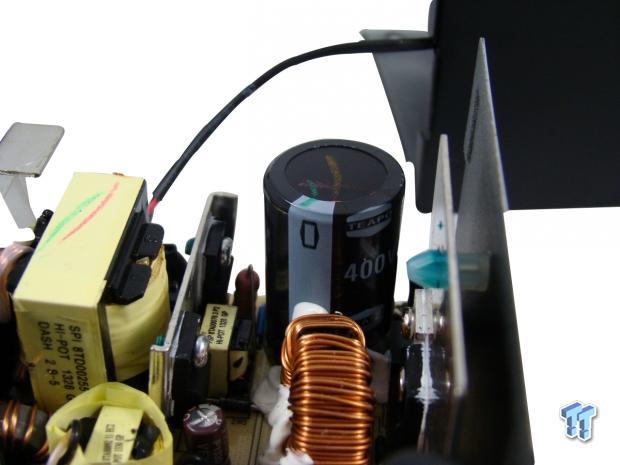 A single Teapo bulk capacitor sits on the primary side of the power supply. 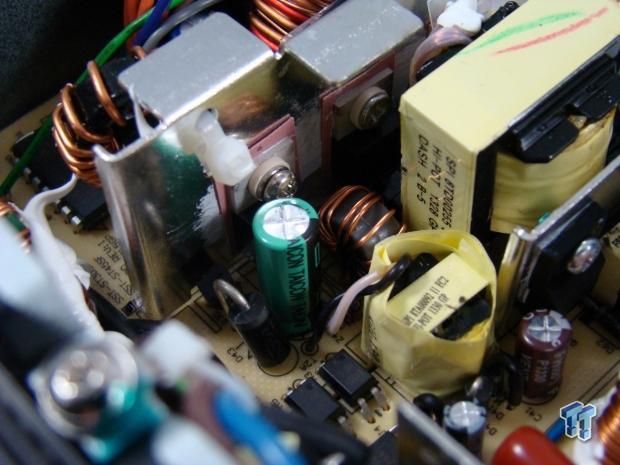 The secondary side is littered with a grab bag of Taiwanese caps. 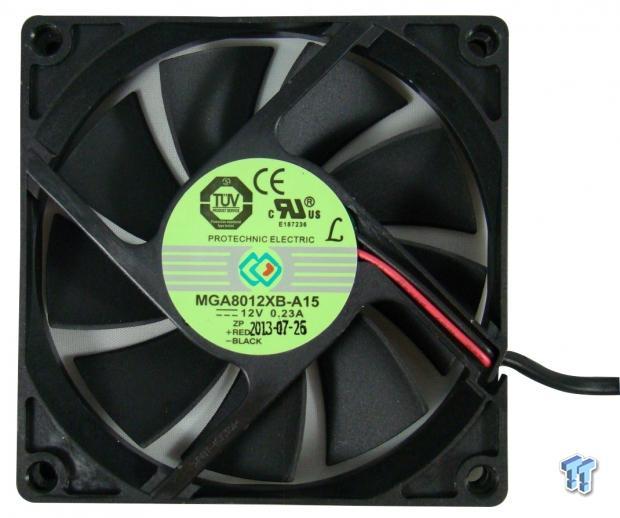 The tests performed are based around six conceivable setups that are out there, and progressively load down the PSU up to the power supply's limits, or 1000W; whichever comes first. Since our test equipment's limits are higher than that of the SilverStone ST30SF 300W power supply, we can test it to the maximum.

DC Output quality for the SilverStone ST30SF 300W was good, and well within specifications. During Test One, we saw 16mV of noise on our scope at 75% load. When we increased the loads in Test Two, the ripple climbed to 26mV at full load.

The SilverStone ST30SF is the smallest unit that we've ever taken a look at here at TweakTown. While we primarily focus on enthusiast type equipment, it is important to not forget about the smaller items. There are quite a few enthusiasts who will get great use out of a unit such as the SilverStone ST30SF, whether it be in low power office machines, HTPCs, or low power gaming rigs for friends and family.

The ST30SF is a great representation of the quality SilverStone encapsulates in all of their products. Even though it is a low wattage unit, it still performs just like any other SilverStone unit. Voltage regulation is within 1% of specification across the board, just like we expected, and the DC output quality is just as good. The efficiency of the unit is also right where it is expected to be for an 80 PLUS Bronze rated unit, and we wouldn't expect any different.

Rounding out the power supply is the price of the unit. Yes, there are cheaper units on the market, but it is often difficult to find a power supply that has ANY resemblance of quality to it when you look at low wattage units. The premium that you pay over a no-name unit is well worth it. The peace of mind that this unit entails over something you've never heard of, is often worth a few extra bucks, no matter how hard earned they are.

What all this boils down to is another great power supply unit from SilverStone. It is a great unit without a doubt. The sad thing about it all is that the power supply is sure to have limited use. There are still many who are stuck on the concept that you need massive amounts of power for a modern computer, when the truth of it is that 500W is more than enough for a single high-end GPU and CPU. As there are literally hundreds of thousands of people who have neither, and require much less than they are led to believe, I can only hope that this article reaches a great majority of them, so that they can realize there are many more options than they realize at their fingertips. 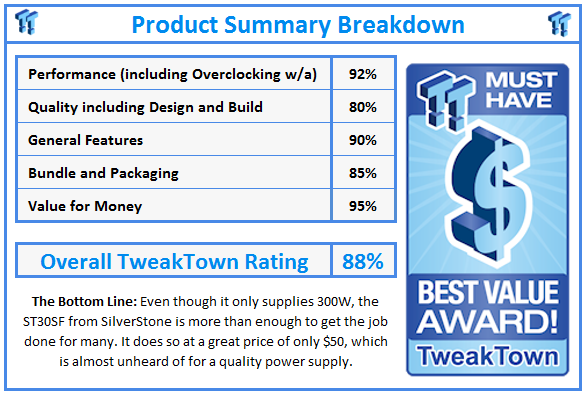