Introduction, Specifications & What's in the Box? 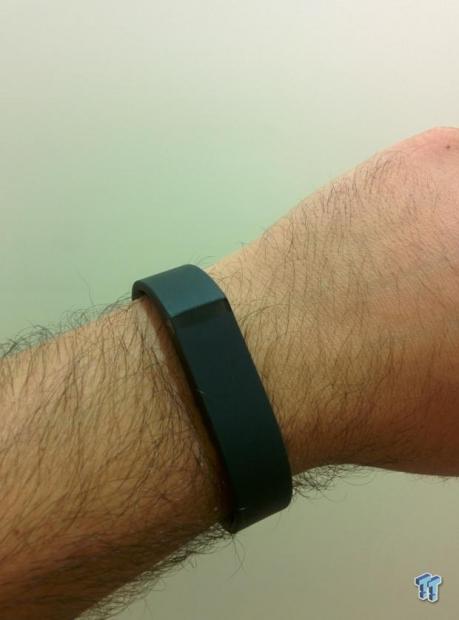 The wearable device market is going to heat up considerably this year; we have all sorts of different fitness tracking wristbands, smart watches, Google Glass, and more. We're starting off the year with Fitbit, and its Flex device.

Fitbit's Flex is a wireless activity and sleep wristband, which tracks all sorts of different things like the amount of steps you've taken.

Fitbit bursts onto the scene with some serious tracking, a great mobile app, and minute-by-minute tracking of your physical fitness. The company also has a bunch of accessories for its various devices, but that's something we'll get into in the future.

The Flex goes for around $100 on Amazon, but there's also the new Force which has just landed (I only found out about it after I had purchased the Flex). The Fitbit Force is $163 USD on Amazon, so you'll have to weigh up the differences. Hopefully we'll have a Force soon that we'll compare the Flex against.

PRICING: You can find the Fitbit Flex Wireless Activity + Sleep Wristband for sale below. The prices listed are valid at the time of writing, but can change at any time. Click the link to see the very latest pricing for the best deal.

For now, let's see what the Flex is capable of, and get the specifications on it. 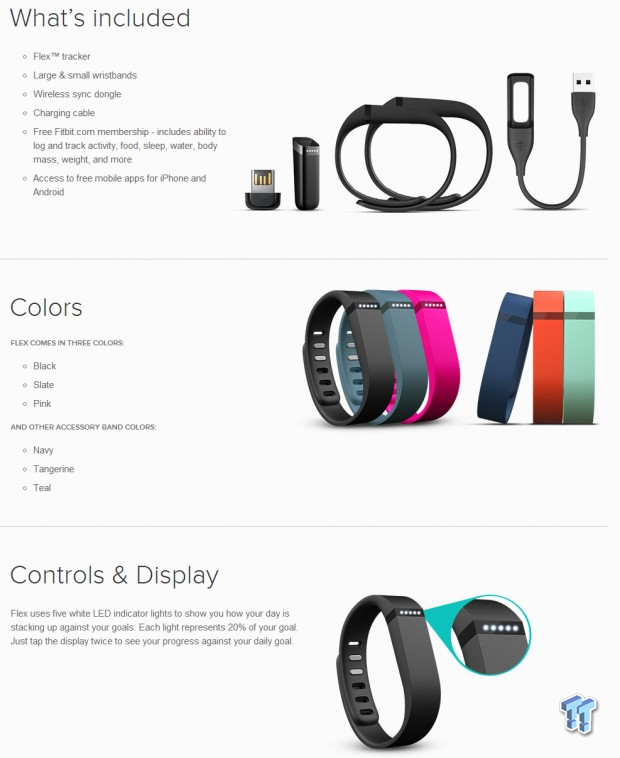 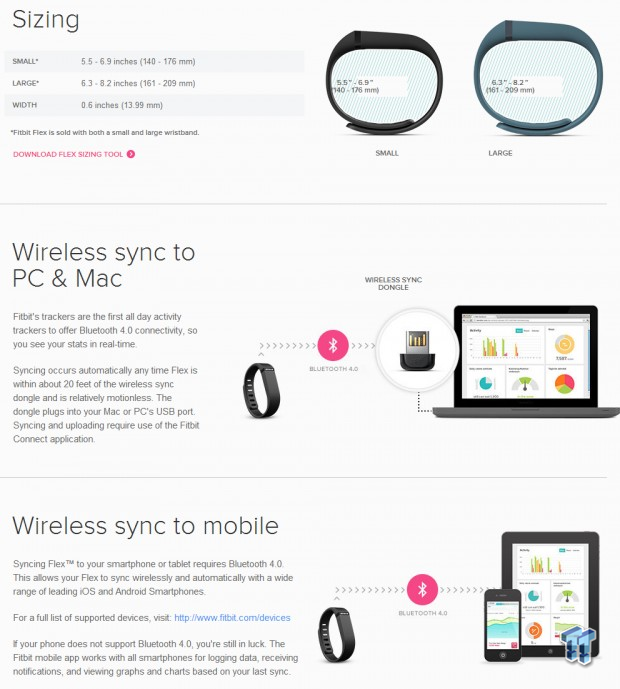 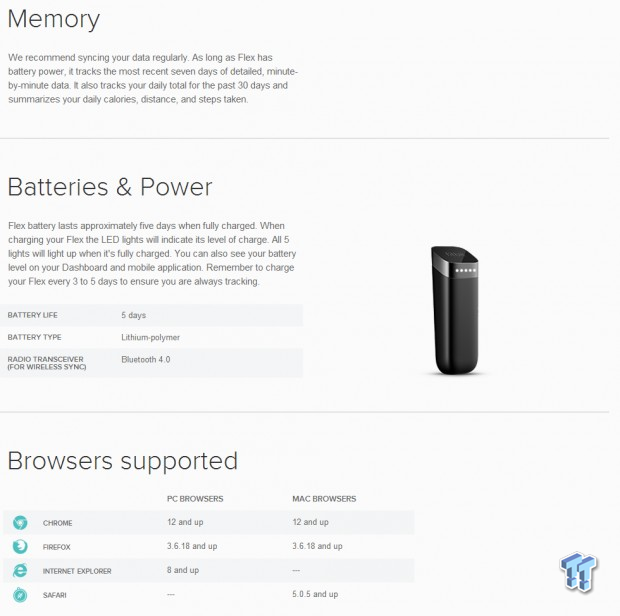 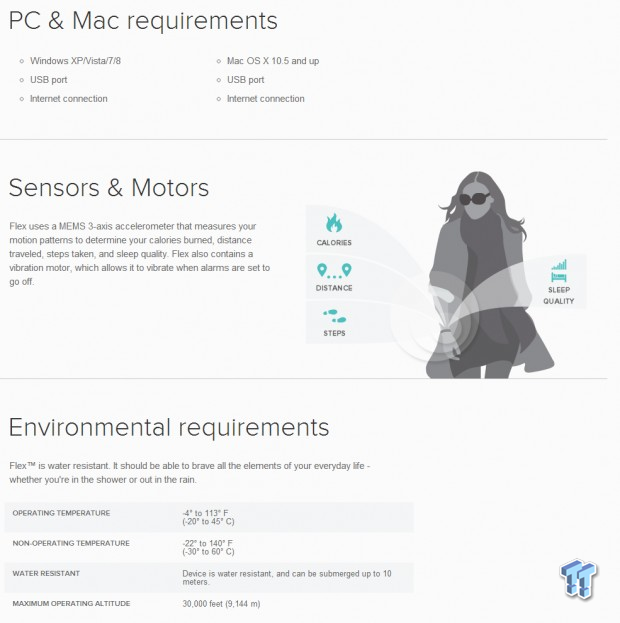 As you can see, the Flex does a lot of things. It comes with two wristbands: a 'small' wristband, and a 'large' wristband. This is great, as Fitbit could've easily sold it as just the small, or large, and sold the different size as an accessory.

The Flex is capable of wirelessly syncing with your PC or Mac, thanks to its included wireless sync dongle. This is included in the box as well; another great addition by Fitbit.

What's in the Box

I didn't quite know what to expect when I opened up the box for the Flex, but it comes with so much that makes tracking your fitness and sleep much easier.

In the box, you'll receive the Flex tracker itself, two wristbands for it (small, and large), a wireless sync dongle, charging cable, and access to free mobile apps for the iPhone and Android devices. I'm using a Nexus 5, so I have the app on my smartphone, and Chrome on my PC, so I have it synced to my PC as well.

I found it incredible that Fitbit included all of this in the box; maybe it's normal with wearable fitness trackers, but this impressed me. The wireless sync dongle is an awesome addition, as is the smaller wristband.

After taking the Flex out of its box, it's just a matter of charging the little module inside of the wristband itself, while you do the setup. We have more of the setup procedure below, so if you want to skip to that, you can; if not, continue on with our first impressions. 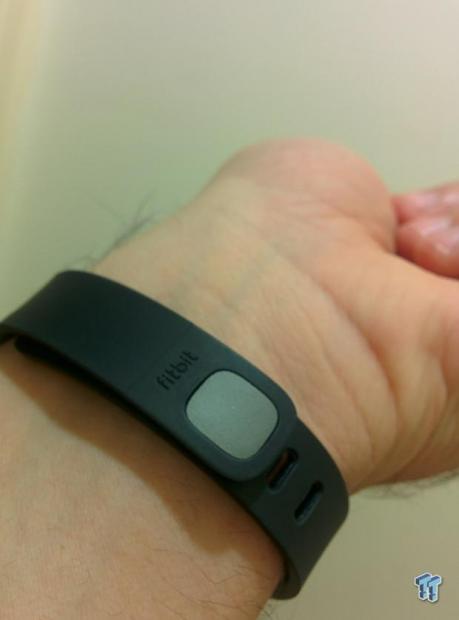 After fully charging it (which didn't take long at all) I slapped the Flex onto my wrist, and went out to dinner. I was chatting with a friend about it, and he mentioned that he doesn't like the feel of it on his wrist, as it is too heavy, and gets in the way.

I didn't find this to be true with my experience in the first 24 hours, and I'm writing this portion of the review on my second day of owning the Fitbit Flex.

I'm not the fittest guy around, but I'm also no massive sloth that slides around on my belly. But, I know I could do with getting fitter. I have a nearly three-year-old daughter who has more energy than our local star, so I wanted to at least push myself to do something, anything, fitness related.

With the Flex, I can slap it on my wrist, and go on with my day. But, as time goes on, it pushed me to walk more, and to try to get my numbers up. Every time I double tapped the Flex, I wanted to see more lights come up, but the only way that will happen is by getting closer to, and hopefully meeting, my daily goals. 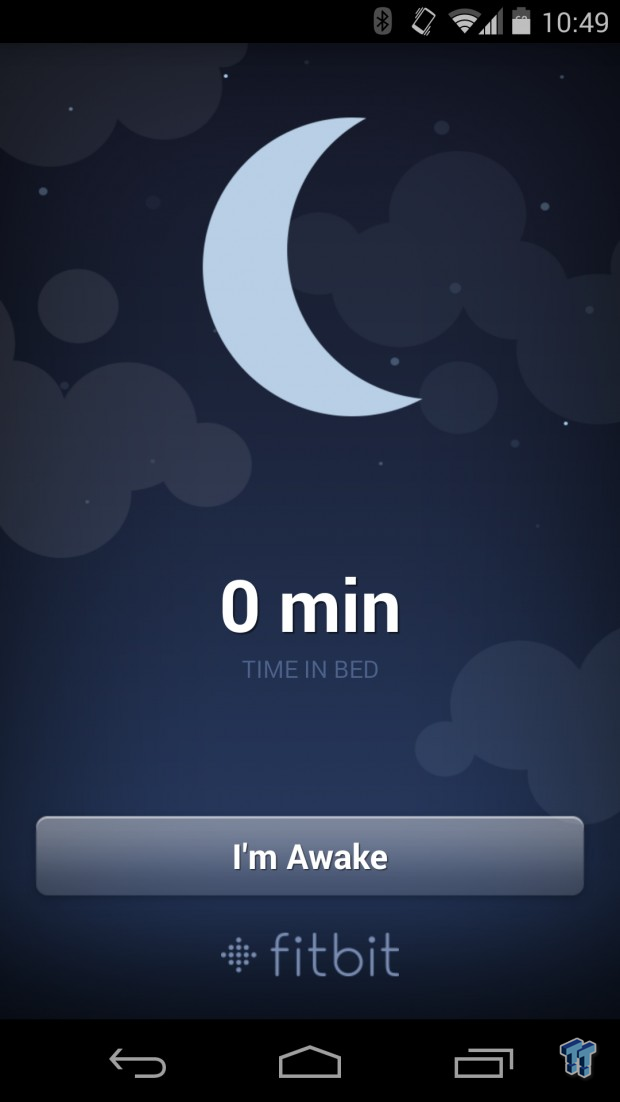 This is something I was actually really interested in: sleep tracking. It usually takes me quite some time to fall asleep, usually between 30 to 60 minutes; sometimes more.

In order to start sleep tracking, you'll have to manually go into your Fitbit app, and tell it you're going to sleep now. When you wake up, you'll have to tell it that you're now awake, too. 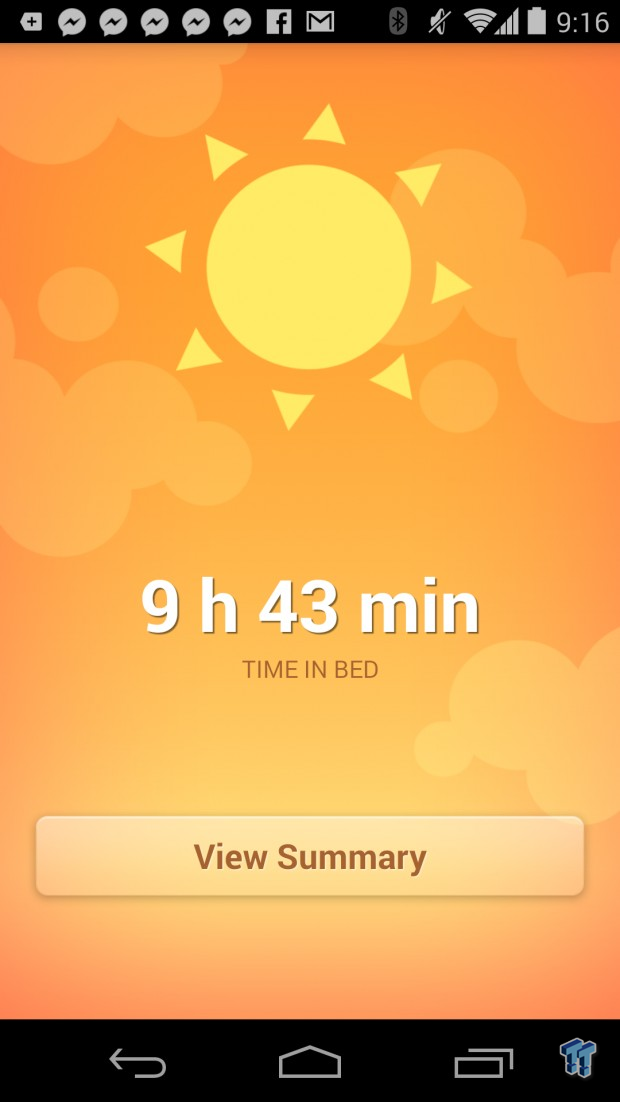 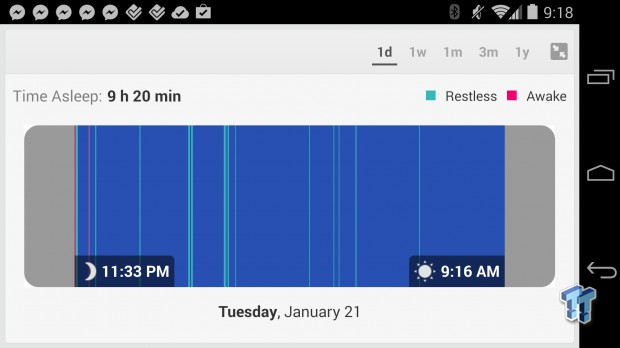 On my first night of tracking my sleep, I actually woke up quite a lot; more than usual as a matter of fact. The first thing I did when I woke up was check my stats, and surely enough, there it was in digitized form: my sleeping pattern. 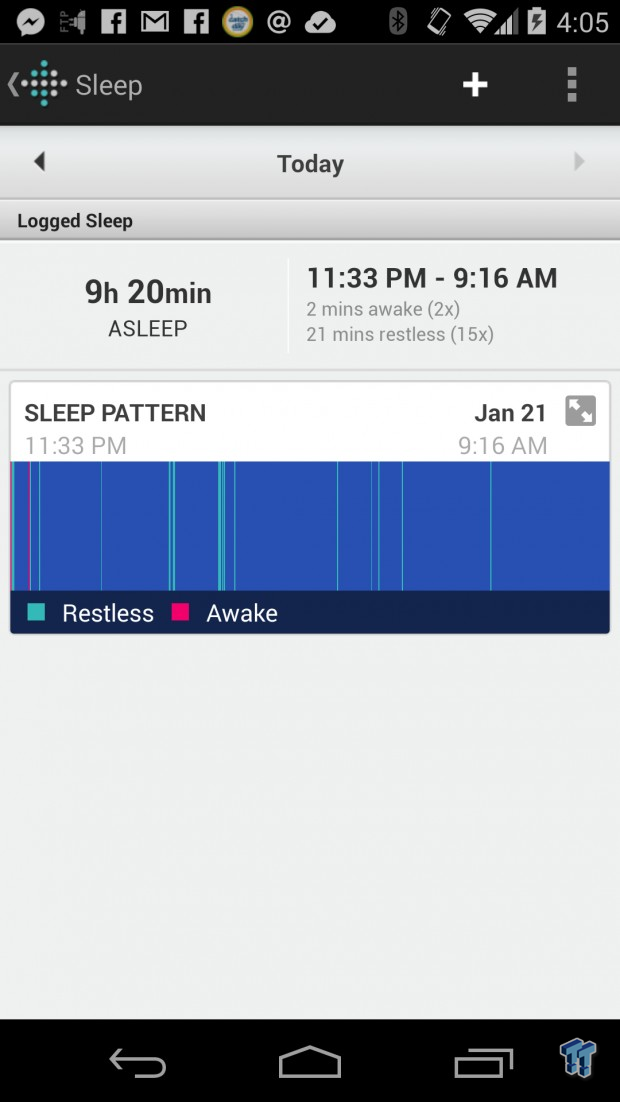 I woke up a fair bit, and had times of fully being awake -obviously, because the Flex is tracking the movement through my wrist. It was really astounding to get up and check my sleeping pattern; I'm slowly turning robotic.

The setup procedure was pretty straight forward. I signed in with my Google account, and went from there. Instead of talking about it, we'll let the pictures say a thousand words. These are all of the steps required to setup your Fitbit Flex wristband: 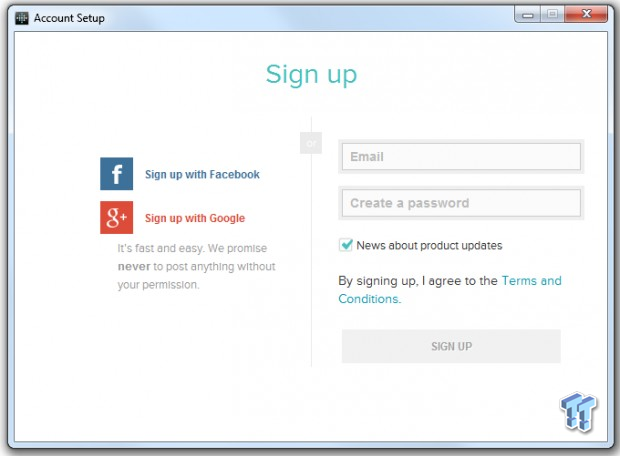 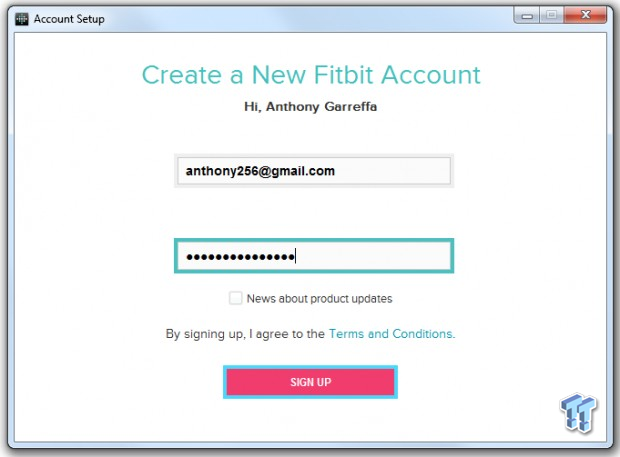 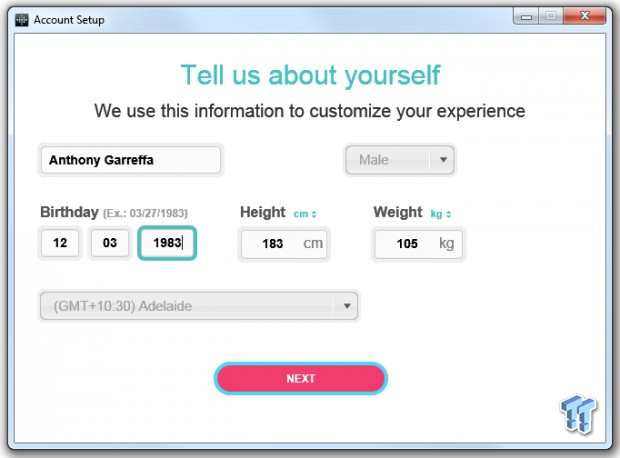 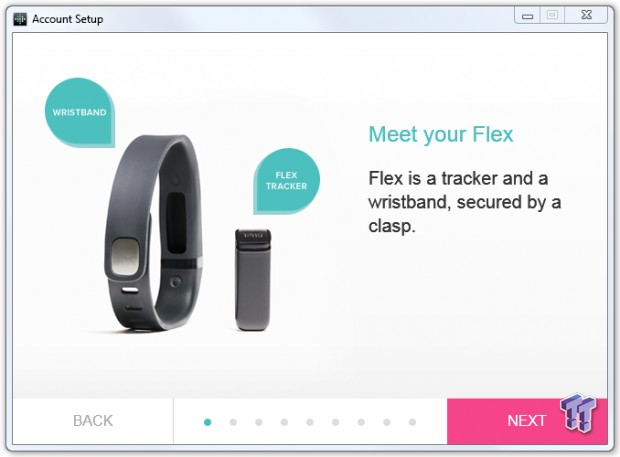 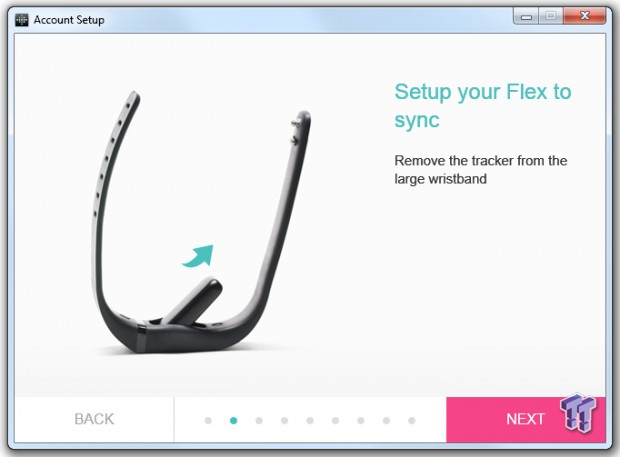 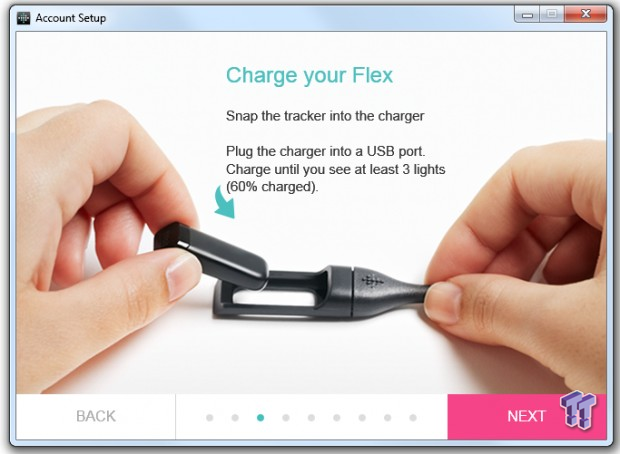 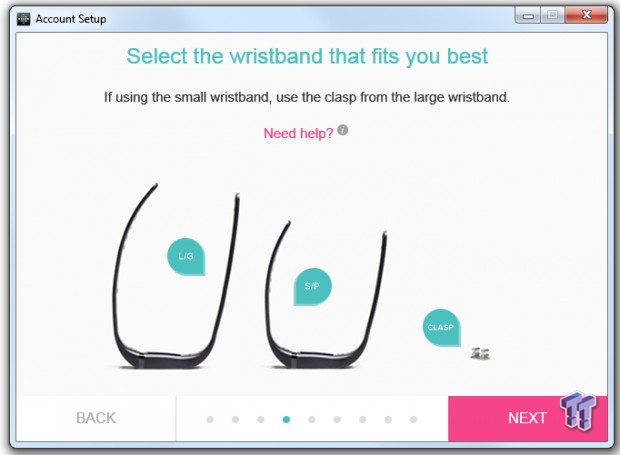 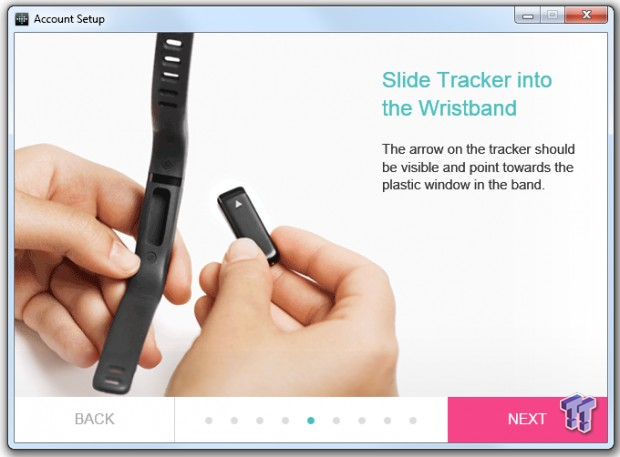 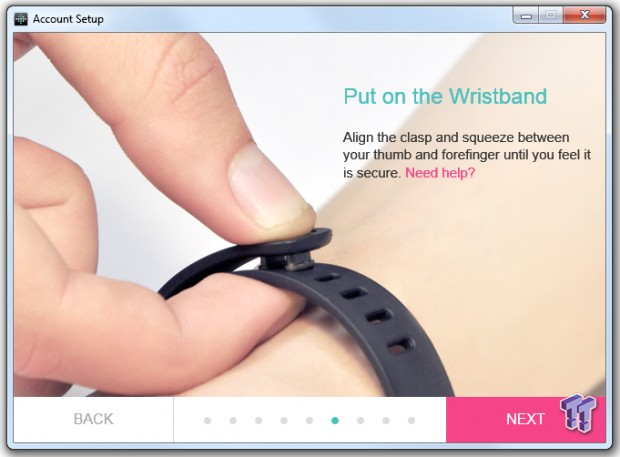 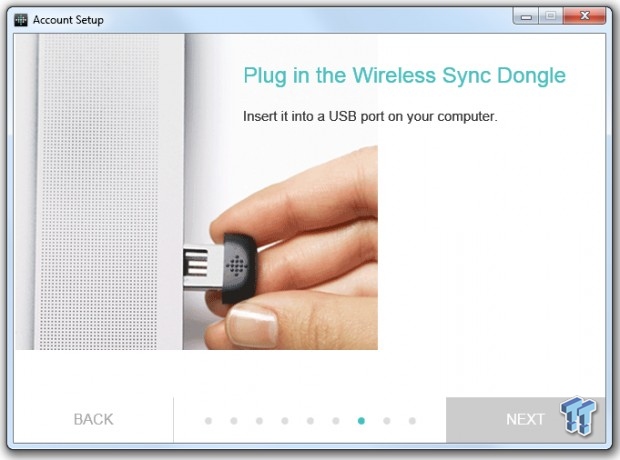 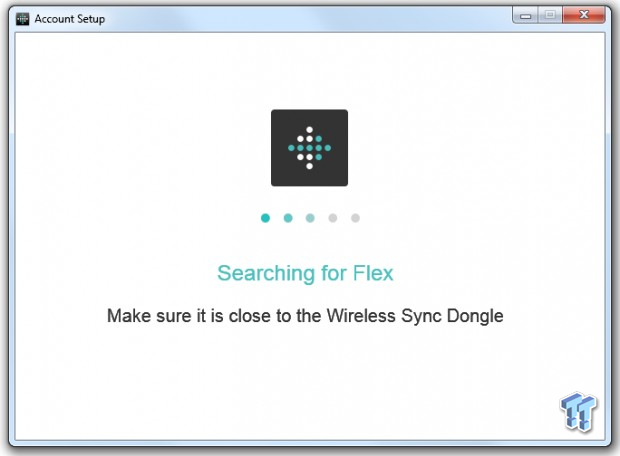 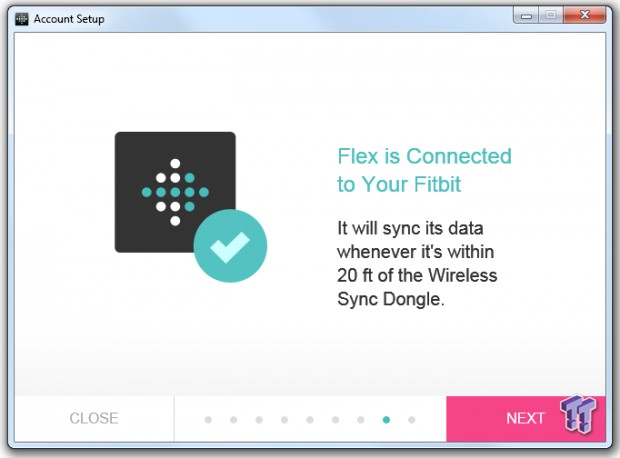 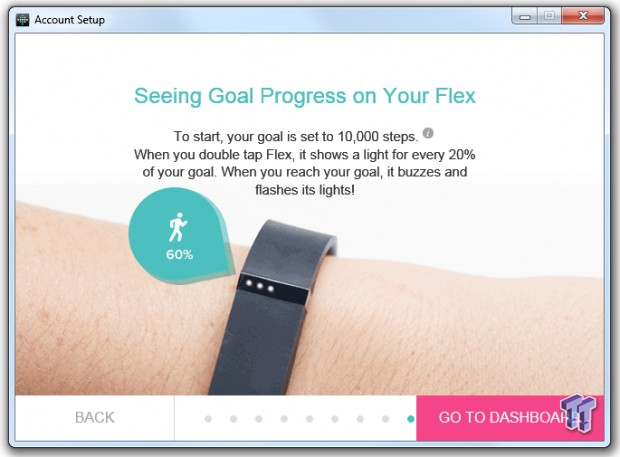 There's a bunch of steps you go through, but it informs of you of what it is doing, and you can do some configuration along the way. Your Flex is usually charging during this time, so you can just flow through the installation easily.

When you're setting up the Flex, you'll plug the wireless sync dongle into your PC, or Mac. Once this is in, there's no reason to remove it unless you're physically moving it to another machine or laptop. I have mine plugged into my Intel NUC desktop PC, which is the machine that I work on for most of the day.

So, every time I sit back down in my chair, my Flex syncs to the dongle and to my Fitbit account. This is incredibly freeing, as I don't need to do anything to sync my Flex -great!

You can manually sync the Flex (if you want up-to-date numbers) by simply refreshing the Flex Dashboard on your browser -just in case you want some serious minute-by-minute tracking.

You can add friends within the Dashboard of Fitbit (both on the desktop, and mobile app), which lets the competitive nature of us all come out.

If you're someone who is competitive, the social nature of using a Fitbit fitness tracker will definitely come into play. You can cheer each other on, or push each other to catch up. The social aspects of Fitbit are endless thanks to the mobile app, and the amazing Dashboard.

Because you're wearing a device that doesn't have a full-blown mobile OS, or a proper touchscreen, the things you can do directly with your Flex are limited. This is why the company has provided a well thought out mobile app. 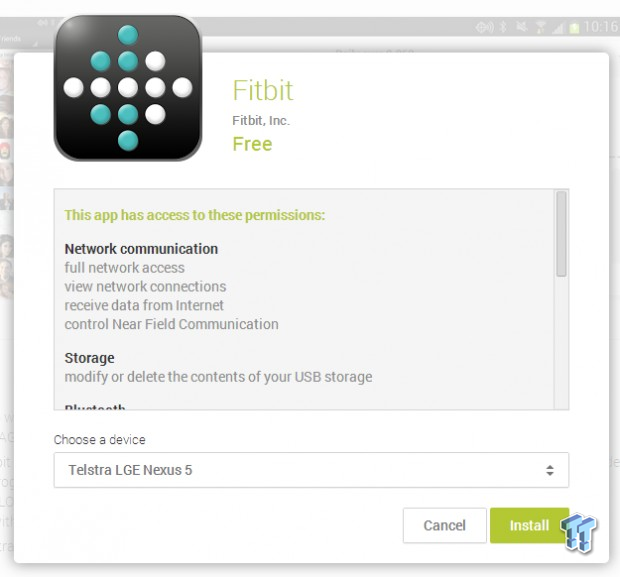 Once you have it installed, you can really go crazy with it. 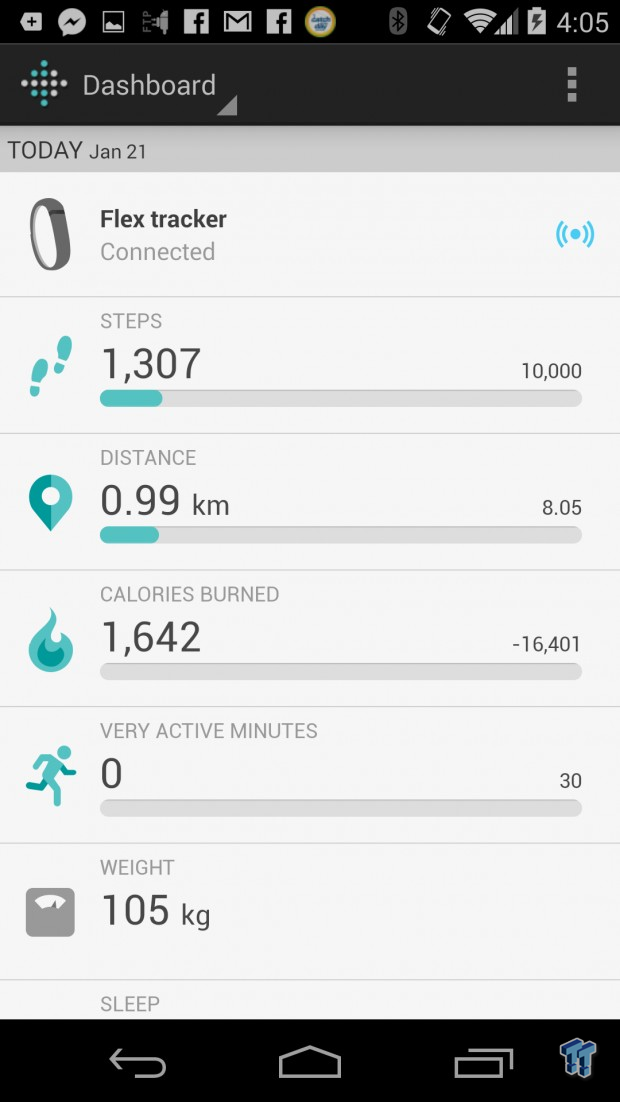 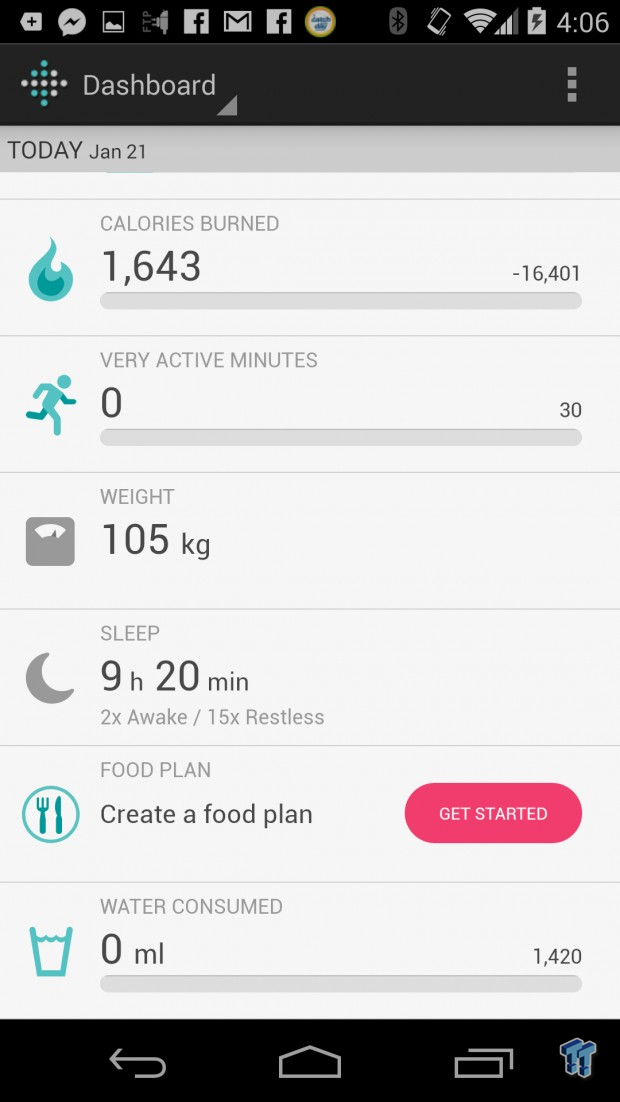 Within the Fitbit app, you have access to your Dashboard. It will display your Flex tracker status from top to bottom, whether it is connected or not. The flex displays: the amount of steps taken, distance walked, calories burned, 'very active' minutes (which is when you're running, or jogging), your weight, sleep, food plan, and the amount of water you've had over the day.

Within the Settings portion of the Fitbit mobile app, you can adjust your time zone (or have it adjust itself automatically), select the country (again, or let it automatically do this), which country's food database you want to be connected to, the units used, and whether you want to have push notifications sent to your device.

It Looks and Feels Great - The Flex looks great for what it does. It has a sleek look, and rubber feel. The screen lights up just enough to let you know what you've done in terms of steps for the day, and that's great. It doesn't feel heavy, or cumbersome to wear, it really just compliments my body (I feel like I'm trying to sell some female accessory here). 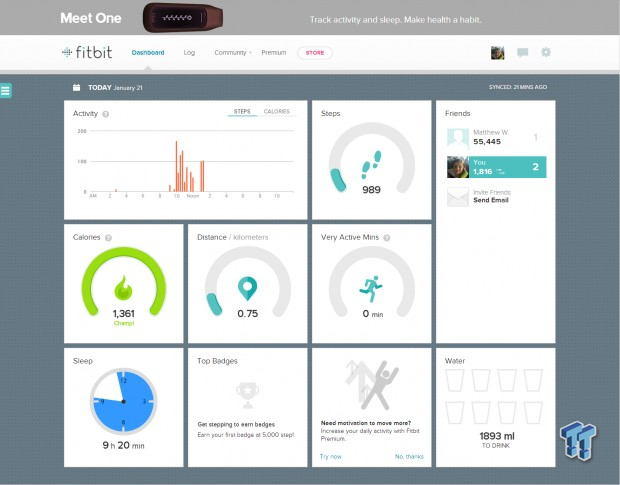 The Dashboard is Powerful - You can tell that Fitbit has put some effort into its Dashboard, which is incredibly powerful.

Mobile and Social Features - Being able to access my Dashboard from my smartphone is something that I loved about using the Flex. The added social features will keep you on your toes, and won't have you slacking off on your fitness.

I'm Slowly Becoming a Robot - After over a decade of not wearing a watch, it feels weird to look down at my wrist and see something there. I don't feel it, because it's so light, but I obviously see it. When I do see it, and press twice on the Flex twice to see my current steps goal, I feel like a humanoid robot. I feel awesome.

The Fitbit Force is Now Here - Damn it! But, this is the way it is in the tech world; things move incredibly fast. I don't mind, as I was able to dip my toes into the world of fitness wearables with the Flex, and it is not something I regret doing. It's not really even a negative, or a "What's Not," but more of a: "Remember, before you buy the Flex, the Force is out now, people."

The Fitbit Flex has converted me into a fitness tracking lover. This is my first, and certainly not my last fitness tracker. There are plenty of others out there, but Fitbit has a treasure trove of goodness here.

The Fitbit Flex provides two wristbands in the package, the wireless sync dongle, the feature-packed Dashboard, the mobile app, and much more. There's also some scales you can buy, which is something I think will motivate me much more into getting out and being more active, and watching what I eat.

If you're in the market for a fitness tracker for yourself: The Flex is a great device. It also makes a perfect, not so expensive gift for birthdays, and Christmas too. At just $100 USD, it's not overpriced, and sits firmly within impulse buy territory. This is something that appealed to me, and I haven't regretted a single step since.

PRICING: You can find the Fitbit Flex Wireless Activity + Sleep Wristband for sale below. The prices listed are valid at the time of writing, but can change at any time. Click the link to see the very latest pricing for the best deal. 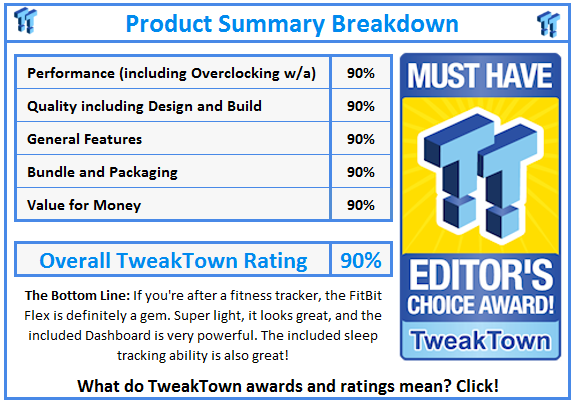