Charge 4 is a home run for Fitbit, which balances a great range of features in a comfortable form factor - all with an affordable price.
Buy at Amazon

It's an odd but almost fortuitous time to be launching a new activity tracker during the current COVID-19 pandemic, as gyms across the world have shut their doors and fitness fanatics look to other avenues to remain active - and one of the headlines features - onboard GPS is particularly timely in this regard.

The Charge family of activity trackers has proven to be Fitbit's most popular and best-selling line in its young history, which is no doubt why the company keeps returning to it with consistent hardware and software revisions. It's been almost two years since the launch of Charge 3, so it's high time for the next and Fitbit haven't disappointed with their most recent iteration of the model, Charge 4 represents undoubtedly the best version yet. But it might not be cause enough to encourage more recent owners to drop what they've already got. 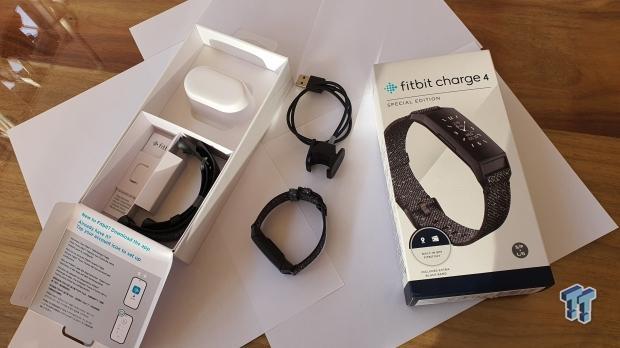 The fluctuation of activity trackers sales figures across the sector in recent years has led many commentators to speculate on its future viability. As they've always done, Fitbit has aggressively attempted to secure its market-leading position by pumping out annual hardware iterations and a steady stream of software and firmware updates. After throwing a lot of product to market, which was quickly abandoned, Fitbit has finally managed to successfully mold their offerings into a number of distinct categories, including the Versa smartwatch, the more feminine Inspire and the child-oriented Ace lines.

Going back to the first Charge model in 2014, the form factor has changed very little, and at first glance, the only way to easily identify any difference is in the size of OLED display, which grew larger and changed ratio for the Charge 3. This year's model hawks that design essentially unchanged, featuring the exact same 1" monochrome 60x100 pixel touchscreen display, which admittedly looks a bit pedestrian in today's market.

I'm sure that will change at a point in the future, but doing so will inevitably result in a knock to battery life or require a larger capacity battery. In good news, however, it's clear and sufficiently bright even under the glare of the sun, and the size allows for plenty of data to be presented on one screen. 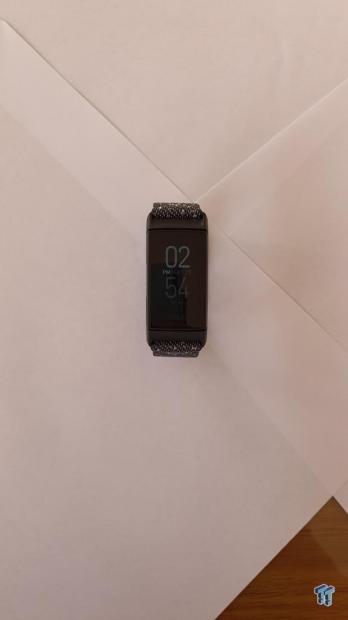 Now while some additional functions have progressively made their way down to the Charge series, it does need to be said that Charge 4 isn't a fully-fledged smartwatch. NFC payments and Spotify connect (premium folks only) are welcome. However, the core functionality of the device is still focused fairly and squarely on fitness, with all the features that you'd rightly expect including an optical heart rate monitor, alerts (but still not WhatsApp, which has quickly become my default messaging platform), sleep tracking, swappable bands and a battery life that consistently lasts for a full week.

Now, the only caveat to the impressive battery stat is with onboard GPS, which to date has only featured on a select few Fitbit models and makes its debut to Charge for the first time here. Previous iterations have relied on connected GPS - that is, piggybacked from a smartphone, which means you need to take that on your run too. It's no doubt a desirable feature, and its inclusion is welcomed, but it does come at a cost to battery life in a very significant way - reducing it from days down to hours. But it does work exceptionally well, locking onto a GPS signal quickly and accurately recorded the results without a hassle. 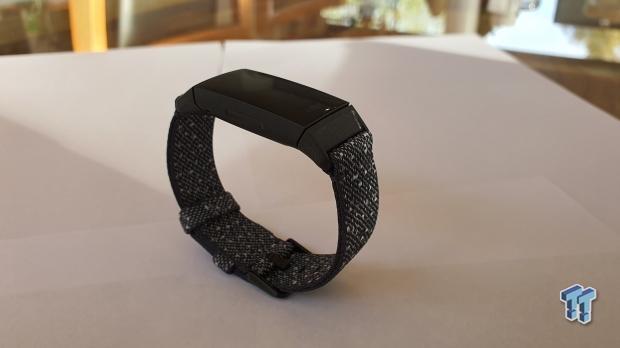 Fitbit's heart rate tracking abilities are for their form factor very good and as accurate as a watch-style device allows. The relatively new SpO2 sensor also returns, which provides an estimate of the amount of oxygen in the blood and works in conjunction with heart rate tracking to provide an illustration of fitness health through the Active Zone Minutes feature which is new to Charge 4 and aims to engage users to engage in more vigorous fitness activities.

As is typical for Fitbit, the onboard OS is buttery-smooth and responsive with the larger display, making navigating much easier than with predecessors, and the Android and iOS apps remain essentially the same. However, they do get upgraded from time to time. As with all models, these are well designed and basically faultless in operation. For everyday information, they're great a displaying the most pressing vital stats. Still, from sheer real estate, the web app gives access to a much broader suite of statistics and interactive graphs to demonstrate the progression of your fitness.

It's also worth mentioning that Charge 4's initial setup is incredibly straight forward and painless, syncing to a smartphone in less than a minute and pulling down a firmware update rapidly. This is something that the company has become much more adept at, and that's appreciated. 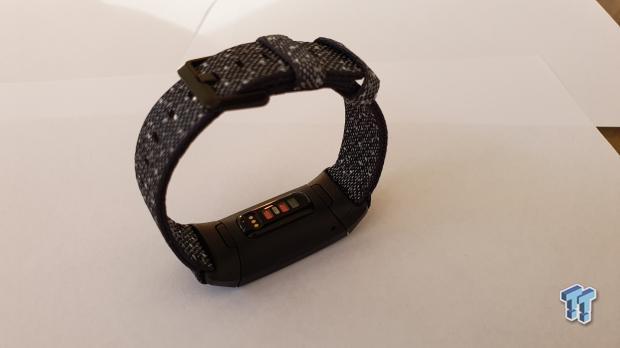 Inside the pack, Fitbit has again bundled both small and large-sized silicone wrist bands, which no doubt make life easier for retailers, but also for those who might want to share the tracker with a partner or child. The Special Edition version of the Charge 4 also comes with an additional reflective woven nylon band which looks and feels very nice indeed. Of course, there's also a range of alternate bands that can be purchased separately. The included USB charger has gone through another redesign, so you can't use the same one from any other series, but it works fine and charges from empty to full in around an hour.

With an excellent range of features, a compact and comfortable form factor, great battery life and now with onboard GPS, it's easy to see why Charge has been such a success for Fitbit and will stand the fourth iteration in good stead for some time to come. While some may complain about the lack of a color screen or GPS killing the battery, everything comes at a cost, and I think the company has done a great job balancing considerations of cost, size, battery life, and consumer demands. There are other models and indeed other brands to consider in this very competitive product segment, but for a good mid-level activity tracker, you really can't do better right now - and that's a credit to Fitbit.

Charge 4 is a home run for Fitbit, which balances a great range of features in a comfortable form factor - all with an affordable price.