There doesn't seem to be a single memory company standing still at the moment; every week we're getting a press release from someone that they've released a new high speed kit. PC3-16000 seems so last year all of a sudden as PC3-17600 has become the number high end users want.

Today we'll be looking at an A-DATA kit which is part of the Gaming series. While we haven't seen anything from the Gaming series before, hopefully the modules follow the same winning formula that we've seen on previous kits of A-DATA memory.

Like most kits we've seen recently, this one is a 4GB kit which means it's best suited for your P55 based platform which has become a favorite to people who want the performance but don't want to spend the big dollars associated with the X58 platform.

For now let's have a quick look at the package and modules before seeing how we went with the kit itself when it came to overclocking and all round performance. 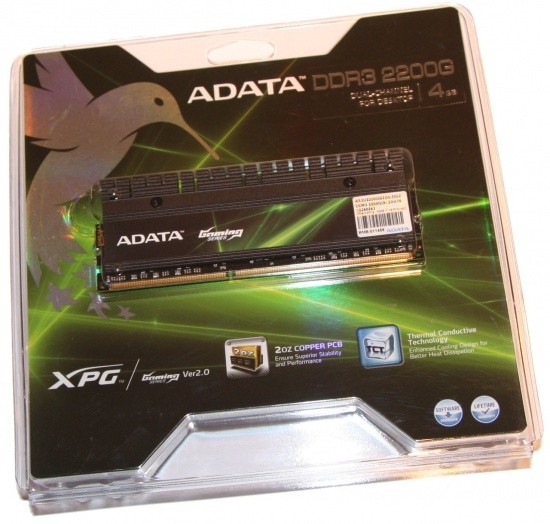 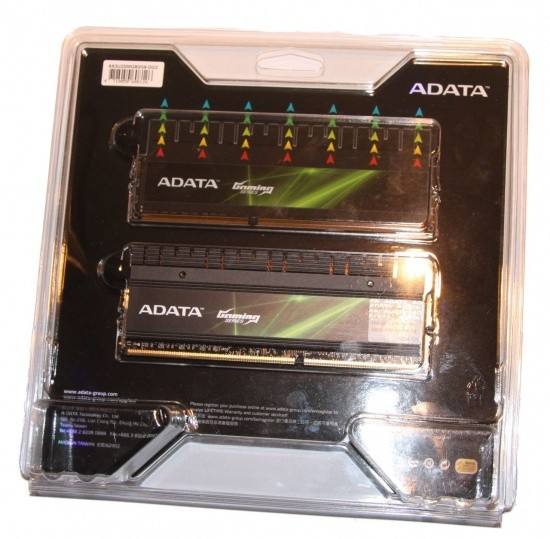 Another really annoying blister pack that's a pain to open. Apart from that, though, there's not a whole lot else to the package with really just the modules being included. You can see on the package a lot of the main features the kit offers.

As we mentioned, we haven't seen a Gaming Series kit from A-DATA before, but you can see that it follows a more traditional design when it comes to the heatsink layout with just a number of fins across the top. 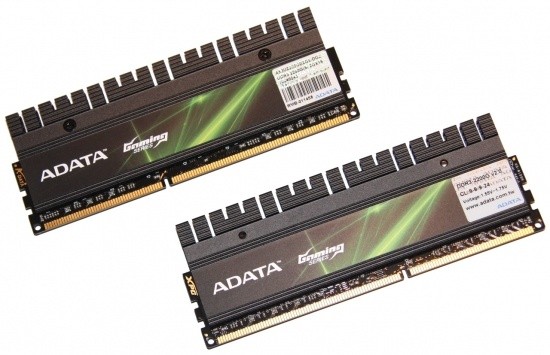 Quality of the heatsink is great with the unit screwed together and not bound together by thermal tape like some cheaper designs. Each side is almost identical with only the sticker being different; one gives us a run down on the specification while the other has the model number, serial number etc. 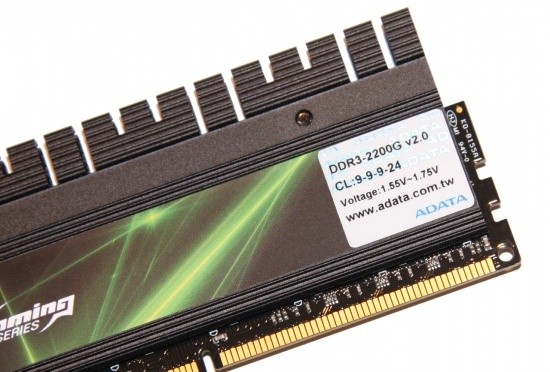 We can see the main specification of the kit here and as mentioned previously, it's a PC3-17600 one which translates too 2200MHz DDR. You can see the rest of the specifications, but we won't go into any more detail here. Let's have a closer look at how we went with the kit on the next page.

This isn't the first time we've looked at a PC3-17600 kit from A-DATA with the last one being part of the Plus Series. With that in mind, I expected no problems at all when it came to achieving the stock 2200MHz DDR clock.

As to be expected, there wasn't a single issue. A little bit of a bump here and a wiggle there and we were in Windows at 2200MHz DDR and ready to go about our testing. 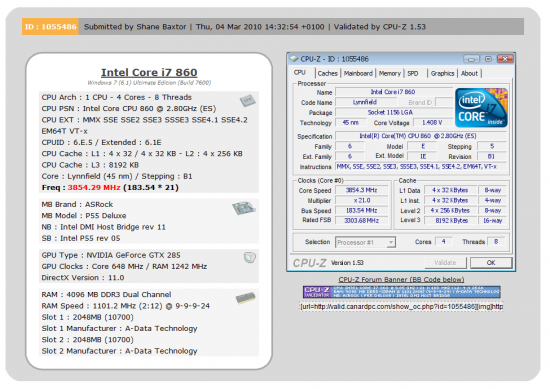 As always, once we have gotten through our normal benchmarking at the default clocks we take the time to do some overclocking. In this department we didn't have heaps of joy; we moved to 2300MHz DDR and couldn't get the machine booting. Moving down to 2250MHz DDR got us into Windows, but we did run into a BSOD here and there.

At around 2230MHz DDR we could get through our benchmarks, but with it only being slightly over the stock speed we didn't bother adding the results to our graphs.


We'll have a look at the kit against a number of other ones to see how the A-DATA Gaming Series kit goes. While we would tend to always offer results for the modules at stock and overclocked, because we could only get slightly above the 2200MHz DDR clock, we didn't worry about including those results today.


Important Note: When modules are overclocked we adjust the BCLK which not only lets us fine tune the MHz out of a module but in turn increases the overall CPU clock speed. While we always make the effort to include the BCLK and CPU Speed in our graphs, please just make sure that you make note of these when looking at the results. In some tests that don't purely test the memory speed the extra MHz on offer from the CPU can increase the result. Of course, it's worth noting that having faster memory gives you the ability to run your CPU at a higher speed, too. 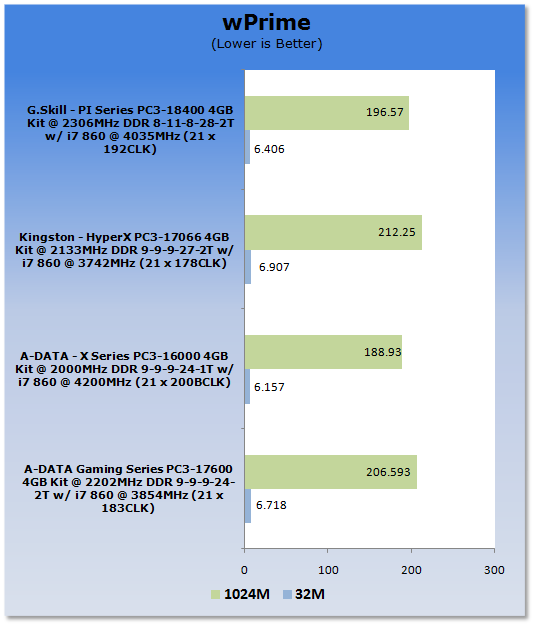 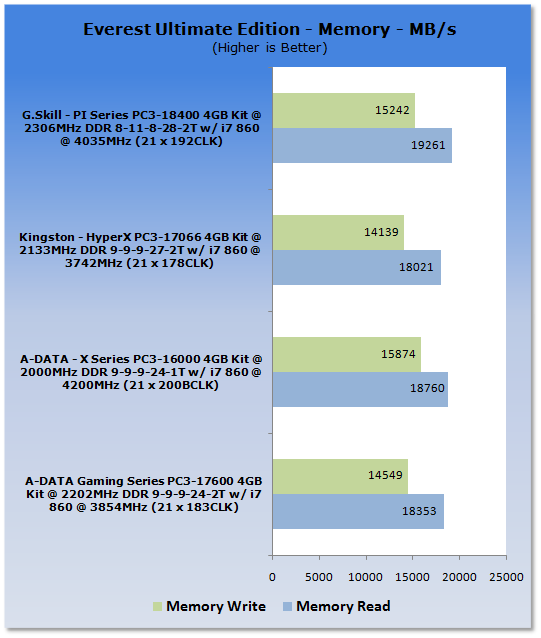 Under Everest the kit sits behind most the other kits, again due to the slower CPU speed. You can see it manages to outperform the Kingston kit, but this is again due to it needing an even slower MHz speed to get the default speed. 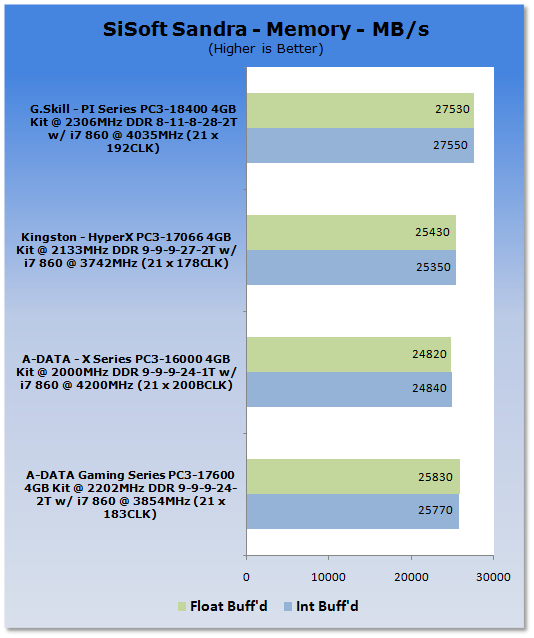 Under Sandra we see the kit performs as you would expect. The only kit to beat it out is the faster G.Skill one which is a PC3-18400 kit. Apart from that it's able to outperform the other two kits we have here. 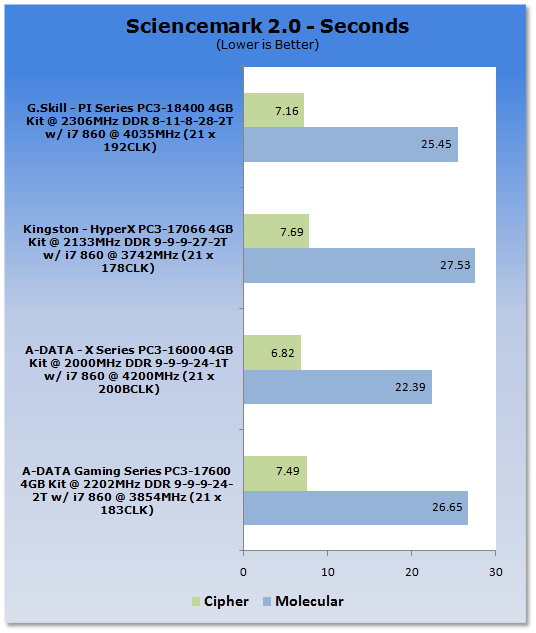 We again see that the CPU MHz is doing nothing for the kit here and that while it does beat the Kingston PC3-17066 kit out, the other two kits with higher CPU speeds pull out the win. 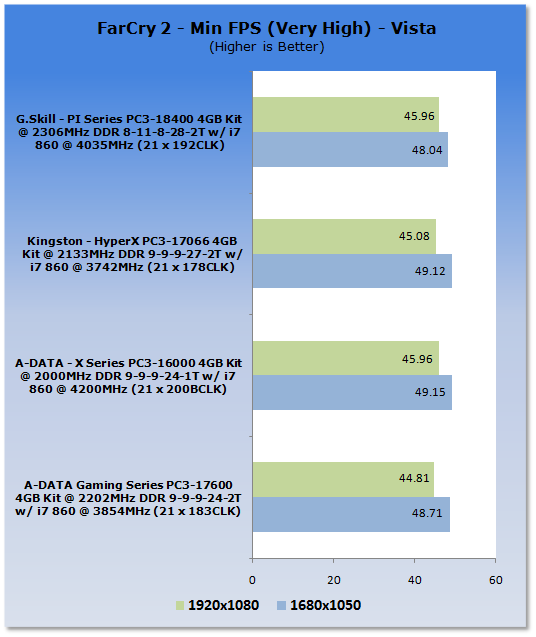 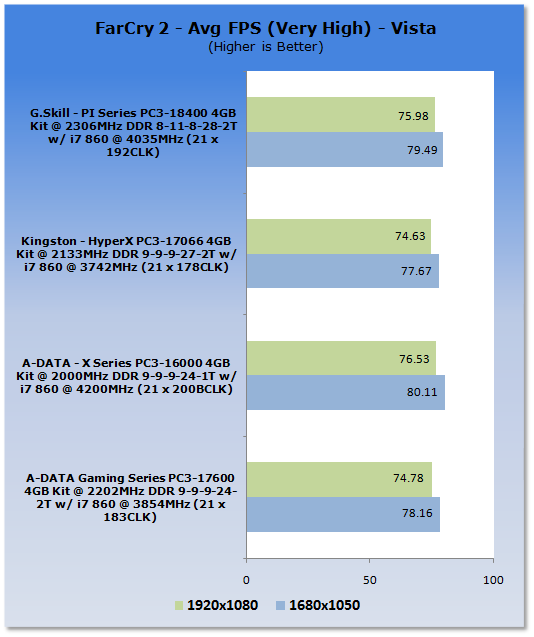 As always there's not a huge difference in performance between all four kits when it comes to looking at real world gaming performance.

I hate to use the words simple and no fuss here when it comes to describing the Gaming Series PC3-17600 kit from A-DATA for the simple fact being that a 2200MHz DDR kit is hardly simple, but this particular kit from them really is a simple, no fuss kit.

When I say that it's simple and no fuss, though, I don't mean that in a negative way. I simply mean you've got a kit that follows a fairly standard design when it comes to the heatsink and just works at its default speed.

You can't fault a product that does what it's supposed to do and that's exactly what this kit does. Sure, we didn't have much joy when it came to overclocking with only an extra 30MHz DDR being achieved, but it's not a huge deal. As long as it does the stock speed, we're happy.

The thing about the Gaming Series is that they tend not to be the fastest parts, even though you might think that they are because of the word "Gaming" in the title, indicative that it would be for more extreme users. To give you an idea, the Plus Series PC3-17600 kit we looked at from A-DATA carried with it more aggressive timings at 8-8-8-24 and was able to overclock to 2258MHz DDR with those said timings.

While we can't find the kit online at the moment, it's clear that we'll see it cheaper than the more aggressive Plus series which means you'll be able to get into a 2200MHz DDR kit for less.

As always, it's important to make sure you have a decent CPU that has the ability to really make use of this ultra fast memory. As we already said, this is a simple no fuss memory kit that's going to be appreciated by people who want the faster MHz but don't want the more aggressive timings which bump up the price.