Besides the recent DDR4 reviews, RAM reviews have been few and far between this year. In the first 8 months of the year, we only reviewed two RAM kits. The simple fact is that the launch of the Z97 platform didn't bring with it a rush of new RAM kits like we normally see when a new Intel platform launches. Speed wise, everyone found themselves pretty much maxed out during the X87 era, and because of that, we didn't really see many new memory kits come to market.

It's not to say that no new kits were launched this year, it's more that companies haven't felt the need to promote the launch of new kits nearly as heavily. That's all changed now with the new Intel X99 and DDR4 being the next big thing for performance users.

As we've mentioned before, the X99 platform isn't replacing the Z97, instead it's sitting above it as the high-end option. That platform it does replace is the X79, which has been the chipset of choice for people looking for a serious, no limit computing experience. 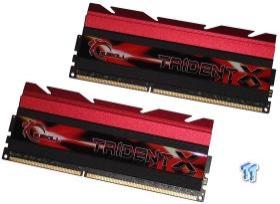 Taking a look above, you can see that the G.Skill kit we're dealing with falls into the TridentX series. This isn't a new series and during the middle of last year we got a chance to look at a kit that carried with it a massive stock clock of 2933MHz DDR. This is an awesome out of the box clock, but a clock speed that is simple unnecessary for many. You might be glad to know that today the kit we're looking at from G.Skill has been dialed back a bit in terms of clock speeds, which also means it's been dialed back a bit in terms of price too. 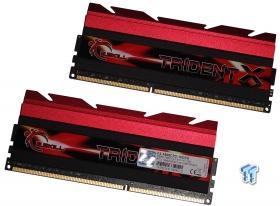 Looking above, you can see we're dealing with a pretty good looking module. The black and red color theme combined with the black PCB makes for a nice looking memory kit. Especially when paired with the black and red themed ROG board we're using here today. Both sides have the G.Skill TridentX sticker. One side does have a different sticker, though, letting us know what we're dealing with in terms of main specifications. 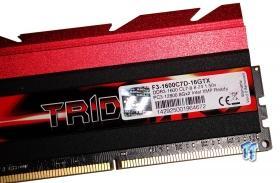 Moving in a bit closer, you can see what we're dealing with as far as the main specifications go. As the F3-1600C7D-16GTX model name suggests, we're dealing with a 1600MHz DDR kit that carries the PC3-12800 label. Timings wise, the kit comes in with quite an aggressive 7-8-8-24 @ 1.5v setup on the two 8GB modules to make up this 16GB Dual-Channel kit. Thanks to the more aggressive timings and the lower voltage, we should be able to loosen the timings up a bit and increase the voltage to get a really nice overclock out of the kit.

Before we do any kind of overclocking, the first thing we want to do is make sure that out of the box the kit works properly. Going into the BIOS on our Z97 based ASUS ROG MAXIMUS VII FORMULA motherboard, we set the XMP profile to the first one and crossed our fingers that we get into Windows fine. Looking below, you can see that everything looks good. The Dual-Channel kit is detected with no issue and runs at the 7-8-8-24-2T timings as it should. 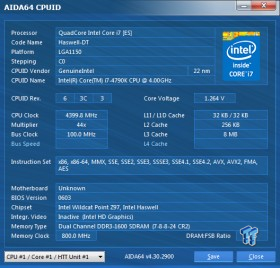 Under AIDA64, we ended up with read/write numbers of 24,289 MB/s / 25,256 MB/s, a copy speed of 24,045 MB/s, and latency of 51.1ns. Looking at performance, you can see the number aren't too bad at all. While the kit comes out of the box at a little slower clock than normal, the more aggressive timings mean that overall performance is quite strong.

With the stock performance out the way, we want to investigate overclocking. At the default timings, we didn't get much more out of the kit. With the timings being left alone, we figured we'd up the voltage to 1.65v and see if we could hit 2000MHz DDR. Unfortunately, we didn't have much luck. Since this was the speed that we wanted to try and get to, we relaxed the timings a little and had no issue booting.

With the kit running at 2000MHz DDR via a 9-10-10-24-2T @ 1.65v setup, we thought that it was worth going back into the BIOS to see if we could get anymore performance out of the kit. Jumping up to the next memory divider, we had the kit running at 2133MHz DDR, as you can see below. Moving any higher from here resulted in a BSOD or just a freeze during Windows load up. Still, this is a nice looking number. 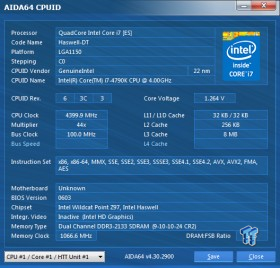 Under AIDA64, we ended up with read/write numbers of 32,232 MB/s / 33,553 MB/s, a copy speed of 31,391 MB/s, and latency of 44.9ns. While we relax the timings, you can see the boost in performance helps yield an overall strong increase across the board. Both read and write numbers jump up a decent margin, as does the copy speed. The only area that doesn't change much is the latency, but overall it's still lower.

Wondering if we could go any further with the raw speed, we headed back into the BIOS and loosed upped the timings a little more. Moving to a 10-12-12-24-2T setup, we're at a timing setup that isn't too ridiculous in terms of being too loose. With the timings here, you can see we managed to push the memory up to a really impressive 2400MHz DDR or 800MHz DDR up from the default 1600MHz DDR. 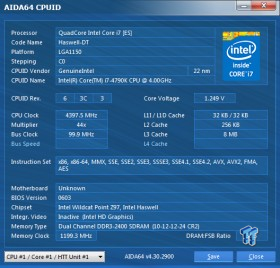 Under AIDA64, we ended up with read/write numbers of 35,158 MB/s / 37,649 MB/s, a copy speed of 33,899 MB/s, and latency of 44.3ns. Across the board, you can see that we've really got a nice little increase in performance here. While the jump isn't quite as high as we saw the first time, the overall increase performance is clearly shown across the board. Outside of comparing the two OC results, though, when you look back at the stock clock performance, you can see really massive gains.

Before we wrap everything up, we headed back into the BIOS and pushed up our CPU clock to see just what kind of performance we can get out of the kit and the system as a whole. With the multiplier pushed up to 47x, you can see our CPU comes in at 4.7GHz, while our G.Skill memory kit remains at 2400MHz DDR with a 10-12-12-24-2T setup. 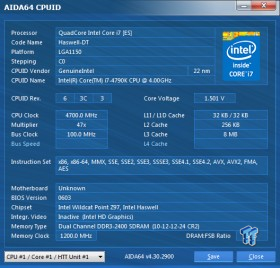 Under AIDA64, we ended up with read/write numbers of 35,264 MB/s / 37,767 MB/s, a copy speed of 34,410 MB/s, and latency of 44.9ns. Without any surprise, you can see that overclocking does very little to performance with nothing more than a bit of fluctuation being seen. We know for the most part that overclocking does little for overall RAM performance and instead helps more system related tasks that rely on the extra CPU performance itself that is being offered.

Before we got the kit from G.Skill, we had heard good things about it in terms of overclocking ability, and today it was nice to see that those rumors held true. While we normally prefer not to adjust the timings much when it comes to overclocking, because they came in at quite an aggressive level already with such low voltage, we figured it was a good chance to loosen them up a bit to see just what kind of performance we could get out of the kit.

Looking through the results today, you can clearly see that the extra memory clock speed helps boost overall performance by a decent amount - even if it does come at the cost of slightly looser timings. Saying that, you can see that we didn't go too crazy with the timings and move to a setup something like 13-13-13-30 to get these kind of clocks. At 10-12-12-24-2T, you're at still a respectable level.

While this all sounds great, it's worth noting that this is also being done on a 16GB kit and not an 8GB kit. Priced at bit under $200, this is a 16GB kit that holds some real value. By overclocking, you can really save a bit of money and find yourself with a solid 2400MHz DDR kit that doesn't break the bank.

We can't deny the fact that everyone's overclocking experience could be different, but at 2400MHz DDR with a CL10 setup, we're not talking about the kind of insane clocks that require a CPU with a monster Internal Memory Controller. Thanks to a good price point and some awesome overclocking performance, this is a fantastic kit of RAM for anyone wanting to build a system that is built around the Intel Z97 platform.

If you're thinking about building a new system that isn't going to break open the bank account and you're after a decent sized kit of RAM that can clock, check out this PC3-12800 TridentX kit from G.Skill.