G.Skill was one of the first memory companies to really show up as a competitor in the performance market after companies like Corsair and OCZ and dominated for a number of years. As time goes on we've seen more and more companies enter the market meaning that there's more competition than ever. What this ultimately means for everyone is we get faster, better and cheaper memory.

Today we'll be checking out a 6GB PC3-16000 kit from G.Skill that sits in the company's Trident series. We haven't seen anything from this series before so hopefully it can impress us. Of course PC3-16000 means that our memory is clocked at a whopping 2000MHz which well and truly places it in the high end segment.

What we'll be looking for today is a good solid looking memory kit that feels good and can also perform. Before we get onto the performance side of things, though, we'll find out what's going on with the package then take a closer look at the modules to see how they're built followed by checking out the specifications of the kit.

G.Skill uses a blister pack that is held together by two knobs at the top of the package. We can see the modules through the package and we can clearly see that they're part of the Trident series. Across the top we can also see it's a tri-channel kit which is designed for i7 CPUs. We can see below this, G.Skill mentions "Extreme performance for Nehalem from G.Skill." 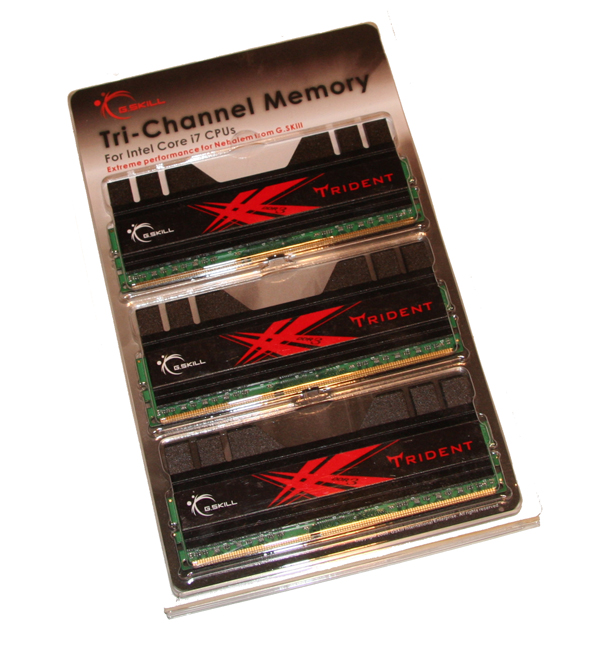 On the back of the package we can see across the top the G.Skill logo along with a "Where speed is!" motto. Below this we have a bit of a blurb on G.Skill and their tri-channel kit. 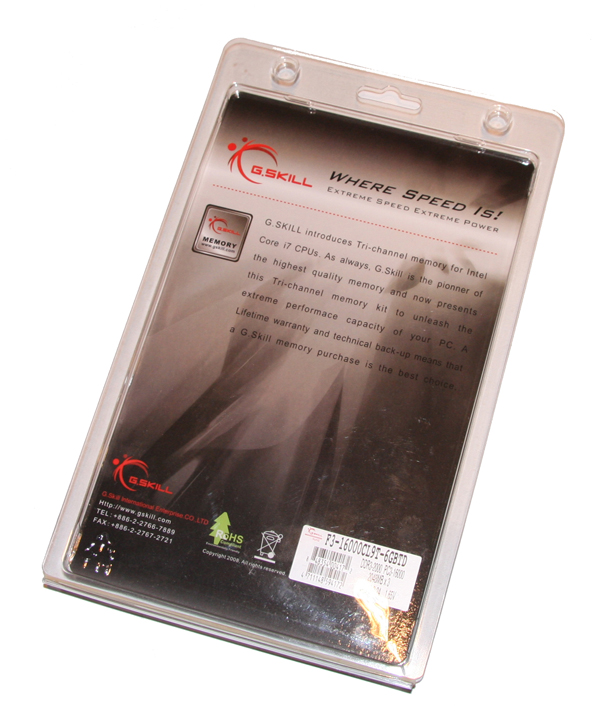 Across the very bottom we have some information on G.Skill, but more importantly we have the model which not only tells us how much memory we've got, but also the speed, which as we've mentioned is 2000MHz. Further to that is mention of the timings these modules are designed to run at. We'll get into more details on this in just a moment, though.

Having a look at the modules themselves, we can see that G.Skill have mixed it up a bit when it comes to the heatsink design. We've got three fins on each side that look pretty funky. What you can't see here is that those three fins are also three fins deep, so what we have is 18 little fins per module. 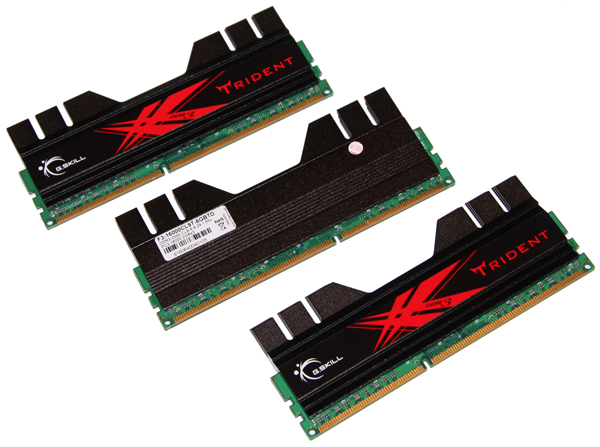 We already saw the front of the modules when we had a look at the package. We can see on one side we have a sticker that gives us the G.Skill and Trident logo along with a bit of artwork in the middle and DDR3 mentioned here as well. 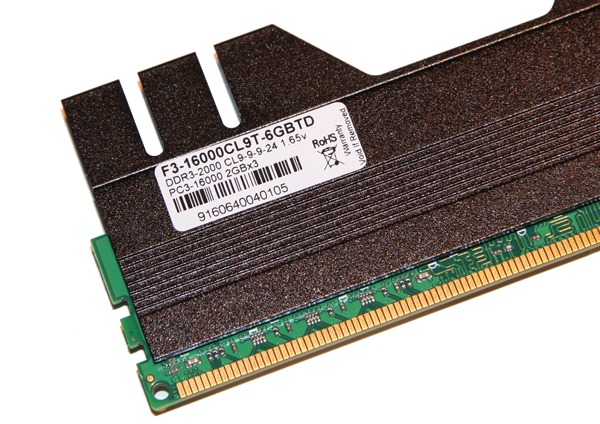 On the other side of the modules there isn't a whole lot going on. We do have a sticker in the top right corner that gives us a run down on all the important information. As we've already mentioned a few times, the modules come clocked in at 2000MHz. As for timings, they're pretty relaxed with a 9-9-9-24 setup. This is achieved at 1.65v. As for the amount, we've got a 2GB x 3 setup to give us a grand total of 6GB.

Like most of our other PC3-16000 kits, overclocking was not easy. Getting to 2000MHz and running the kit at the company's 9-9-9-24 setup was an absolute breeze. Getting any further then that was difficult and even moving to a 10-10-10 setup and bumping the voltage up slightly didn't give us the ability to squeeze anymore MHz out of the kit.

We'll find out what kind of edge these timings give the Corsair kit. The other thing we have to remember is that the Corsair comes in at $329 versus $149.99 which is what the G.Skill kit comes in at over at Newegg.

With that all said and done, let's get stuck into the benchmarks and find out what exactly we have going on with the memory we have today.

Across the board we can see that all memory kits sit quite close together with no major difference being seen.

Under EVEREST we can see the 2000MHz kits shine. Write performance between the two kits is very similar. As for read, we can see that the slightly more aggressive timings on offer from Corsair give it a slight edge.

Under Sandra performance on the G.Skill kit is a fair whack behind the more aggressively timed Corsair modules.

In the Cipher test we see the G.Skill kit fall back ever so slightly. As for the Molecular test, it manages to pull out a win.

Looking at real world performance, there isn't much between all the kits.

One thing we have to mention that we haven't already is the build quality. Slapping two pieces of aluminum onto the side of a memory module isn't enough to stand out from the pack these days. While you can't really see the quality of the kit from pictures, when you pick up the kit and feel it you really notice that G.Skill have made the effort to make a high quality heatsink.

The other big stand out feature of the kit is of course the price. At 149.99 U.S. Dollars over at Newegg, the kit manages to again stand out from the pack and for some people this will be the most important feature G.Skill could offer.

If you want a 2000MHz kit that isn't going to break the bank the G.Skill option we have here today is going to be a good choice. The other bonus, as we've mentioned, is the quality of heatsink the company has opted for.

We've got some good speed, an aggressive price tag and some all round good performance here. If you want the fastest modules on the market you're going to have to spend so much more for what will ultimately be a very little performance gain in real world situations. The G.Skill kit manages to stand out and if you want to spend under $150 then it's one kit that's seriously worth looking at. 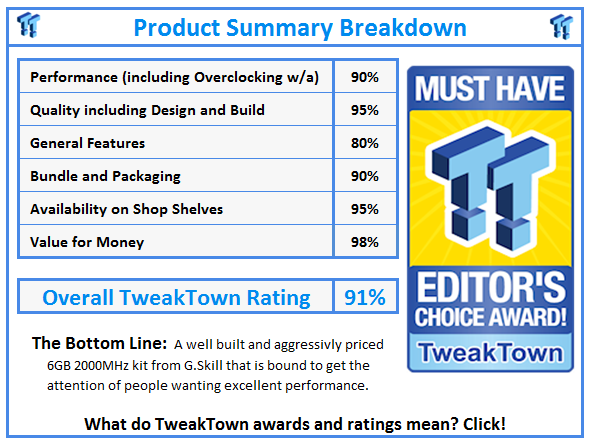