We are on the eve of NVIDIA's next-gen GeForce RTX 4090 graphics card being unleashed, but that hasn't stopped the weekend leak game from continuing to tease GPUs that we, unfortunately, won't see this year.

NVIDIA's beasty new GeForce RTX 4090 is a powerhouse you'll find out about shortly, but earlier this year we heard crazy rumors of the full Ada Lovelace GPU and its next-gen power with an 800W or even 900W+ insane card that would be known as the new TITAN... and hopefully, TITAN Ada. 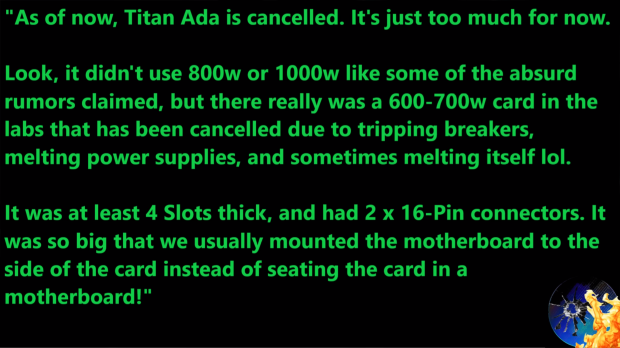 Well, Moore's Law is Dead pumped another video out over the weekend with one of his trusted sources giving us an update on TITAN Ada... and yeah... what an update. Tom at MLID explains: "this comes from somebody that over about 6 months they have proven to me they are more than legit, based on the pictures and information they've fed me before things have been made official. This person tells me that as of now, TITAN Ada is cancelled. It's just too much for now".

The source continued, adding that the card didn't use 800W or 1000W like those crazy rumors from earlier this year suggested, but the card did use 600W to 700W in the labs and was cancelled due to TITAN Ada tripping breakers, melting power supplies... and sometimes... "melting itself lol" added MLID's source.

TITAN Ada was "at least" 4 slots thick, and had not one but two 16-pin connectors... but get this: TITAN Ada was so damn big that the source MOUNTED THE MOTHERBOARD TO THE SIDE OF THE CARD... instead of slotting the graphics card into the motherboard. That's quite the flex there.

NVIDIA is expected to see how AMD's upcoming RDNA 3-based Navi 31-powered Radeon RX 7900 XT graphics card, which could have GPU clocks as high (or over) 4.0GHz with AIB partners saying they're going to clock Navi 31 "to the moon" later this year.

The fight of next-gen GPU supremacy is upon us people, and we have front row seats.