Slowly but surely the world finds out the mess that the Intel Arc GPU situation is, with enthusiasts and readers of TweakTown and any other tech press (written or video) should know by now... but now Intel is thanking Gamers Nexus for exposing 43 separate issues within the Arc GPU software. 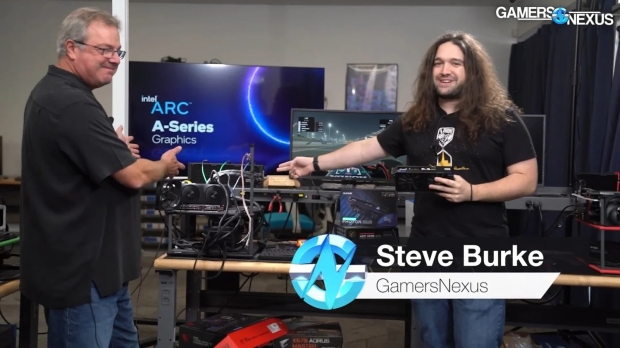 In a new blog post on the official Intel website, Intel's Vice President of the Visual Computing Group, Lisa Pearce, explains some of the recent happenings within the Intel Arc graphics software development department. There's not much new here, but there are some interesting things like saying the reviews of their Arc A380 graphics card by Gamers Nexus (who said it wasn't a review) helped them file 43 issues with their engineering team.

One of the questions that Lisa answers is "Question #3: I've read reviews that say Intel's driver is not ready yet. What's the status?" to which she answers: "We appreciate the feedback we are getting in early reviews of our Arc software stack. And it has been bumpy. We have received frank feedback from press during recent reviews, and we have taken it to heart. For example, we filed 43 issues with our engineering team from a review of the A380 by Gamers Nexus".

"We had corrected 4 of those issues by the end of July. Since then, we corrected 21 UI issues in our driver release on August 19th, and it also includes Day0 support for Saints Row, Madden NFL 23, fixes for Stray and Horizon Zero Dawn crashes, Marvel's Spider-Man performance fix, and fixes on SmoothSync corruptions. We are taking similar approaches with reports from other press reviews".

"We are continuing to learn what it will take for us to be successful. Some of the issues were related to our installer and how it downloaded unique components after initial installation. This allows us to have a smaller initial download to get users started quicker. But unexpected failures are causing that process to be unreliable, and later this year we will be moving to a combined package that is downloaded and installed all at once. No more installer issues".

Personally, I think it's kind of embarrassing. Intel has near unlimited funds to throw at the Arc GPU project, hundreds if not thousands of staffers and brains combined, an independent tester steps in and in days finds 43 issues that are serious enough to have the details of those problems sent to the Arc engineering team.

Intel has so far used its marketing budget on working with hand-picked YouTubers, as contracted GPU testers I guess. Slowly, but hopefully surely, Intel are squishing issues out of the Arc software and hardware because a regular consumer wouldn't put up with this, not for a second.