Intel is truly struggling with its GPU marketing team... with Arc being a total DOA POS, and now MLID is coming out for their throat... and rightfully so. I've been pushing against Intel and this "marketing" that htey're going, and it seems that I'm not the only one. Check out Tom's latest video, and a bunch of his comments below:

It looks like Intel could have a major "fundamental hardware flaw" inside of the Arc Alchemist GPU scheduler, which is causing issues (amongst the laundry list of things wrong with the Intel Arc GPU). Tom explains: "Igor has started to find, and from what I'm hearing behind the scenes... there's almost certainly a fundamental hardware flaw in the scheduler of Alchemist".

Tom continued: "Can they make things better... can there be mitigations in drivers that they will improve over time... yes... but it's never going to be perfect. It's already having problems above 90FPS consistently at super low resolutions with a weak card... how are they going to get a high-end card to game above 144Hz".

"The worry behind the scenes is that they just can't".

"You see, what I believe everyone is watching right now -- and again, remember, I've covered extensively in previous leaks that Intel manufactured their cards around January through March of this year. They have the high-end Alchemist die sitting in a warehouse waiting to be packaged... then all of the sudden this media tour just came out of nowhere".

"They missed their Q1 launch and yet they are just rushing out there to talk to everybody. It's because they thought they'd be able to fix the drivers by now and they realized probably around May or June that they're never going to perfectly fix these drivers and so they've got to axe the top model and launch what they can right now. That's why the messaging is all over the place: inconsistent in conflicting with what they've already said publicly and just... well... just rubbing a lot of people within Intel that aren't in the graphics division the wrong way".

"This brings me to another thing a lot of people probably haven't noticed: Ryan (Shrout) and Tom (Peterson) going around to all these tech channels, they're actually part of a marketing group within the graphics division itself... not part of the main Intel marketing wing. A lot of people within the main Intel marketing wing and within... well, just the rest of Intel are starting to notice that what the graphics division is communicating right now is not what the division is communicating internally inside of Intel".

"And you want to know what they're communicating right now internally?"

"I have proof... like I said a week ago: the lies being spread publicly have pissed off a lot of people working with Intel, and within Intel... and I have now painstakingly through editing to make sure what I show is safe. Gotten the okay to show you guys what's actually being shown to everyone else within Intel".

Alchemist is "full of issues that would basically hamstring any attempt to compete higher than what they're going for anyways". Tom adds: "this outcome isn't entirely surprising, if you've paid attention to the negative disclaimers" with a big list of what his sources have told him... check this laundry list of a shit show out: 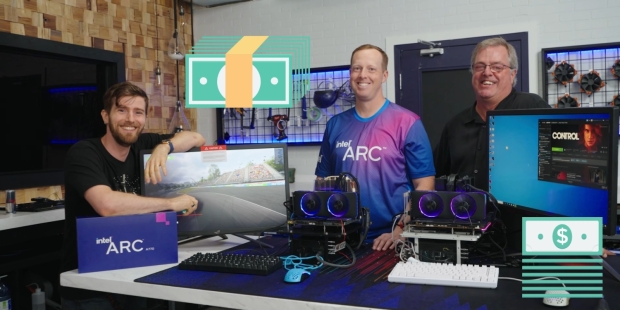