We've been hearing all sorts of bad news about Intel's new Arc GPUs where I've been reporting on news that Intel would outright cancel their Arc GPUs altogether over how bad it has gotten, and now Intel has reportedly lost their first AIB. 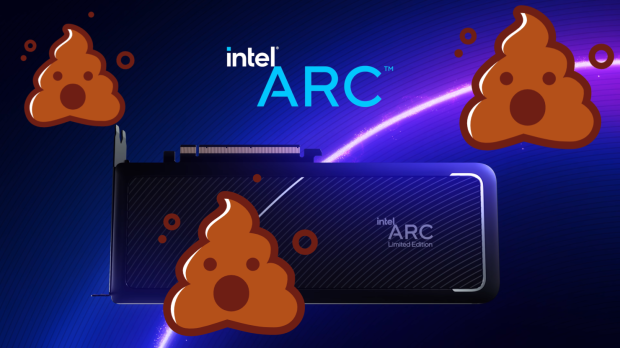 The first AIB to stop production of custom Intel Arc GPUs has reportedly made history, becoming the first AIB to pull out of Intel's new Arc GPUs before they even really began. The news is coming from Igor Wallossek at Igor's Lab, who reports that the first of the big board partners have "stopped the production of Intel cards completely" which his sources say are "due to quality concerns".

Igor reports: "At least one of the big board partners has even stopped the production of Intel cards completely ("due to quality concerns"), as I could find out yesterday and today. [...] Other board partners have at least already completely capped their marketing activities, and it does not currently look as if there will be any real launch offensives from the board partners in the time window I mentioned between August 5, 2022 and September 29, 2022. What will really arrive on the market (as retail) will be seen in the next few weeks. From the customer's point of view, I can only hope for the best, I alone lack faith".

So all that "negativity" that I've been accused of, which is me just doing my job: reporting the news, the rumors, and everything in between... seems to be true. Intel has been a mess for a while now, with miscommunication about its Arc GPUs reportedly happening both inside, and outside of the company. Intel is telling some of its departments one thing while having a different external message.

We might see this particular AIB partner spool up the production of Intel Arc GPUs in the future, but I'm sure they'll be wanting to wait to see how Intel's new Arc GPUs go in the coming 6-18 months. Game compatibility, driver issues, hardware and software issues, and a million other things that I'm sure AIBs are scared of... warranties and returns will happen.

AIBs will take a huge hit when that happens, and I'm sure Intel isn't worried about its brand (it's big enough, they'll survive... but the image of their GPU marketing will be almost beyond destroyed, all credibility gone) but it'll cost them in the end in terms of consumer confidence, market confidence, and I'm sure many more ways that the company will experience throughout the end of this year and into 2023.