Intel's next-gen 13th Gen Core "Raptor Lake" CPUs are very close to being in our hands now, but a new video is teasing a huge 6.0GHz overclock across all of the Raptor Cove CPU cores. 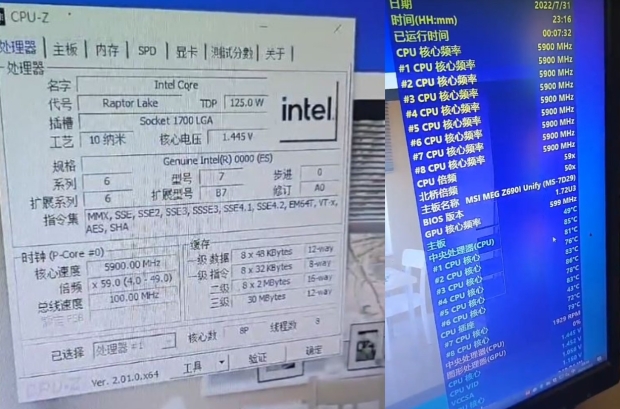 The new Intel Core i7-13700K "Raptor Lake" CPU was overclocked to 6.0GHz on an MSI MEG Z690I Unify motherboard, with only the 8 Raptor Cove P-Cores enabled, no E-Cores were enabled, with voltage pumping in at 1.421V. CPU temps were hitting 25C to 37C which means we're looking at temperatures that were captured before, or after the testing was completed.

Another screenshot has all of the 16 cores enabled, with the Performance cores at 5.8GHz while the Efficient cores were clocked at 3.7GHz -- resulting in 947 points in the single-threaded test, 12896 in the multi-threaded test. The new Intel Core i7-13700K processor was placed into an ASUS ROG Strix Z690-A Gaming motherboard, which will use DDR4 memory.

A video was also posted, with the purported Core i7-13700K processor being stress tested inside of Cinebench, with the CPU clocks at a lofty 5.9GHz and voltage at 1.445V. During the stress testing, we have 85C package power temperatures.