AYANEO has announced its new AIR, AIR PRO, and AIR Plus gaming handhelds today... versus the single new handheld, most were expecting. All of them have AMD's new Mendocino APU, and more. Let's do it: 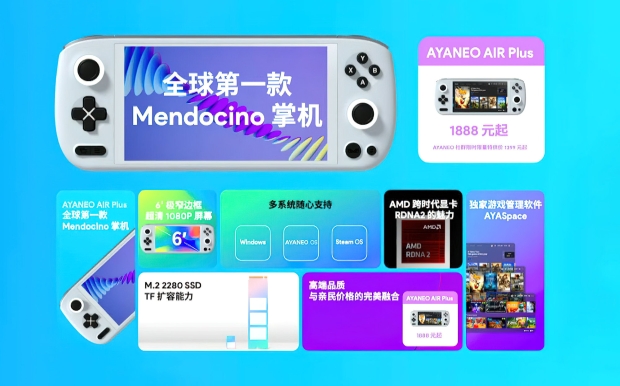 The new AYANEO AIR Plus handheld starts at just $289, making it cheaper than Valve's own Steam Deck, making good use of the new AMD Mendocino APU. The new AYANEO AIR Plus is a new handheld gaming PC that rocks the new AMD Mendocino APU made on the 6nm process node by TSMC, with a 6-inch 1080p display with support for both Windows or the Linux-based AYANEO OS -- or SteamOS.

AYANEO is pricing its new AYANEO AIR Plus at just $289, which will get it a lot of attention... better yet, there's a launch promotion that drops that price down to $199 which is damn incredible. We don't know what you have to do to get that $199 price, but you do need to be a member of the AYA Community.

Under that, we have the new AYANEO AIR and AYANEO AIR Pro, which feature 5.5-inch OLED displays and the use of the AMD Ryzen 5000U series APU with Zen 3 CPU cores and Radeon Vega GPU cores. These handhelds are offered with 8GB to 16GB of LPDDR4X memory at 4266MHz, with a 7350mAh battery.