AMD showed off a 16-core engineering sample of a Ryzen 7000 series CPU at Computex 2022, cranked up to a rather huge 5.5GHz in ES form... at stock settings, no overclocking says AMD.

AMD has now confirmed that when it was running Ghostwire: Tokyo on the Zen 4 processor, that when it was hitting 5.5GHz that it was at stock: no overclocking. The Ryzen 7000 series CPU was running at over 5.3GHz for the most part, cooler with a 280mm AIO cooler from Asetek with 32GB of DDR5-6000 CL30 memory.

The stock Zen 4 CPU was hitting 5.2GHz to 5.5GHz on all cores, with AMD wanting the world to know this is at stock and nothing special was done. Ian Cutress confirmed that AMD was using a "reference mobo" with a 280mm AIO cooler, "plugged in, no OC" and that it was the "natural" frequency of the CPU. He added that "most threads around 5.5, depends on scene/game" while "5.2-5.5 on all threads was common on the game". 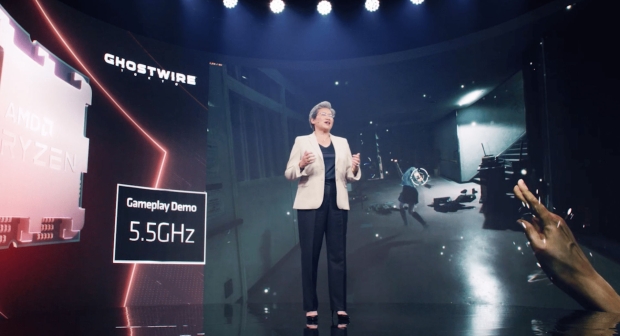