AMD's next-gen Zen 4 architecture is a "bigger deal than Zen 3 was" according to the latest leaks, and that's obvious by now... AMD is once again going to be delivering the goods with some CPU domination later this year. 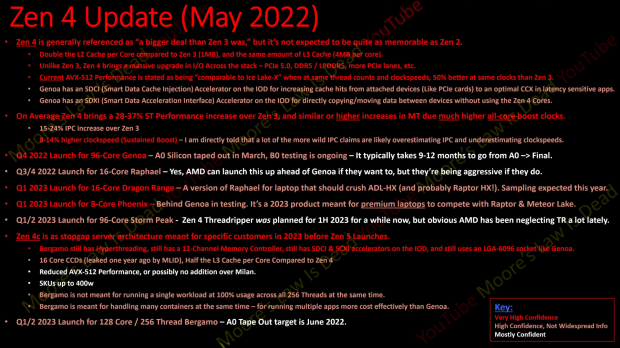 In a new video, Tom @ Moore's Law is Dead says that Zen 4 is generally referenced as "a bigger deal than Zen 3 was" but also adds that "it's not expected to be quite as memorable as Zen 2". He has "very high confidence" in his sources saying Zen 4 will have double the L2 cache per CPU core than Zen 3 (1MB) and the same amount of L3 cache (4MB per core).

Zen 4 has a "massive upgrade" in I/O across the board: PCIe 5.0, DDR5 + LPDDR5, more PCIe lanes, and more over Zen 3. AVX-512 performance is being stated as "comparable to Ice Lake-X" with the same threat counts and CPU clocks, but a huge 50% faster than Zen 3 chips with the same CPU clocks.

Now, the IPC performance improvements are what we're all here for... with Tom saying his sources think we'll see a large 15-24% improvement in IPC over Zen 3. CPU clock speeds will be 8-14% higher (sustained boost) with Tom adding that he's "directly told a lot of the more wild IPC claims are likely overestimating IPC and underestimating clockspeeds".