A study on the binary system titled "A 62-minute orbital period black widow binary in a wide hierarchical triple" has been published in the journal Nature. 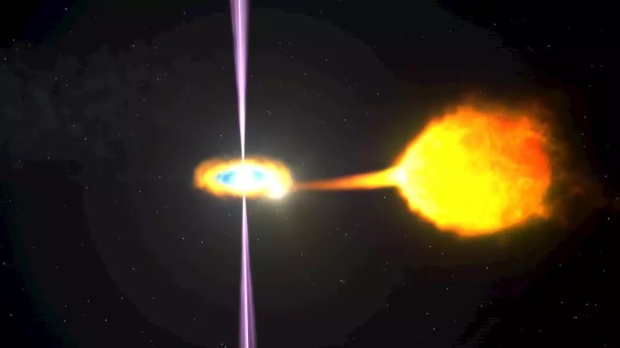 MIT astronomers have detected a "black widow binary" star system candidate approximately 3,000 light years from Earth, named ZTF J1406+1222. The star system comprises a pulsar (a rapidly spinning neutron star) and a smaller companion star that the pulsar is slowly consuming, like its namesake, the black widow spider, does to its mate.

Two dozen other black widow binaries have been observed throughout the Milky Way. However, this candidate is unique in that it appears to have a third star associated with the system, circling the two inner stars from afar every 10,000 years. The inner pair of stars also has the shortest orbital period of any known black widow binary, circling each other every 62 minutes.

"This system is really unique as far as black widows go, because we found it with visible light, and because of its wide companion, and the fact it came from the galactic center. There's still a lot we don't understand about it. But we have a new way of looking for these systems in the sky," said Kevin Burdge, a Pappalardo Postdoctoral Fellow in MIT's Department of Physics.

"The one thing we know for sure is that we see a star with a day side that's much hotter than the night side, orbiting around something every 62 minutes. Everything seems to point to it being a black widow binary. But there are a few weird things about it, so it's possible it's something entirely new," Burdge continued.