The pop-up airport was built in the heart of the city of Coventry by U.K.-based startup Urban-Air Port Ltd (UAP). 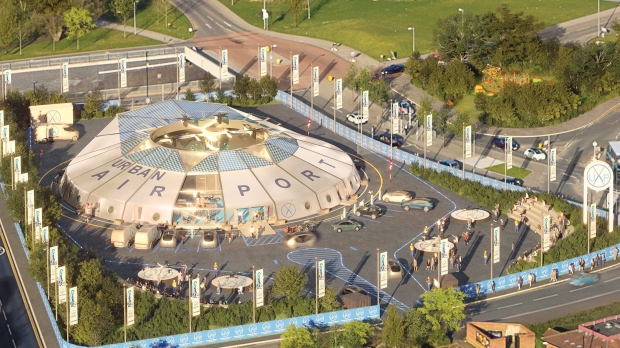 The airport is the world's first urban airport, where electric drones and air taxis, categorized as electric vertical take-off and landing (eVTOL) vehicles, can arrive at and depart. The project is a collaboration between the Coventry City Council and Urban-Air Port Ltd, intending to demonstrate "the potential of urban air mobility to cut congestion and air pollution."

"The opening of Air-One is a momentous moment - the starting gun for a new age of transport, an age of zero-emission, congestion-free travel between and within cities that will make people healthier, happier and more connected than ever before. Cars have roads. Trains have rails. Planes have airports. Now, eVTOLs have an Urban-Air Port," said Ricky Sandhu, the founder and Executive Chairman of Urban-Air Port.

The pop-up "vertiport" is powered by hydrogen fuel cells and is designed for use with zero-emission electric drones and air taxis. The advanced air mobility (AAM) market is forecasted to grow to USD 1 trillion within the next two decades. Analysis by NASA has determined that "the lack of ground infrastructure remains one of the single biggest barriers to growth."

"From design, through to fabrication and now into operation, Urban-Air Port has delivered Air-One in just 15 months, setting the standard for deployment globally and opening up a world of possibilities for rapid response air mobility. Air-One is just the first model in our infrastructure fleet and our order-book is not only open but already growing. The interest is turning into recognition of the need for our technology and into demand," Sandhu continued.