The robot takes on the appearance of a humanoid upper body mounted on the end of a hydraulic crane arm, which rides around on the rail system atop a specially braced rail car. The rail car can deploy stabilizing legs when it arrives at its destination along the line, allowing the robot to manipulate heavy equipment around the rail system instead of workers "to improve productivity and safety."

The robot is controlled by a human pilot wearing a virtual reality (VR) headset. Motion tracking allows the pilot to turn their head and have the robot turn its head accordingly while streaming what it sees to the pilot. The pilot also controls the robot's arms and hands with a pair of handles, and if an external force moves the robot's arms, that motion will feed back into the pilot's grips.

JR West is collaborating with Human Machinery co. and Nippon Signal co. to develop the robot, which is due to be put into full-time operation in 2024. 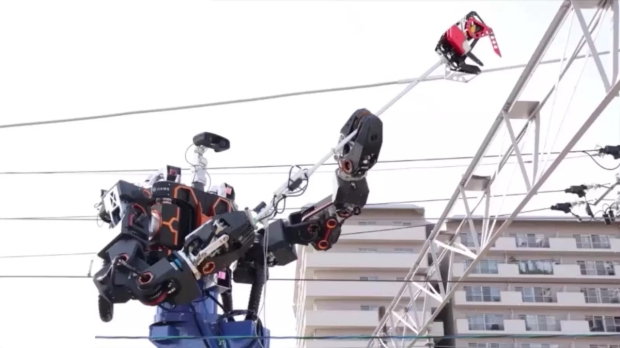