AMD is still a month away from releasing its RDNA 2 refresh GPUs which will be led by the new flagship Radeon RX 6950 XT, and now the custom GIGABYTE variant has been spotted. 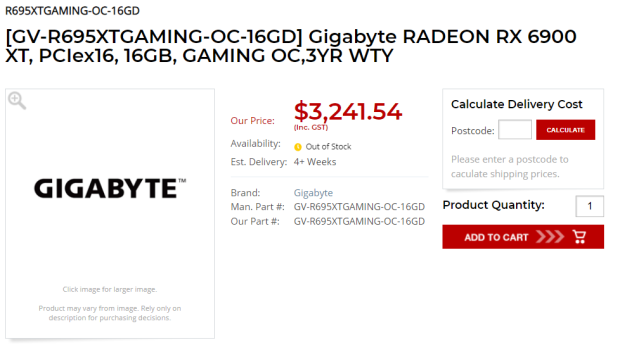 GIGABYTE's upcoming Radeon RX 6950 XT GAMING OC graphics card was spotted on an Australian retailer website for AUD $3241 which works out to around $2400. It's not a full listing, as it's just a placeholder -- the listing is for the Radeon RX 6900 XT variant -- but you can see the product code GV-R695XTGAMING-OC-16GD.

If you compare that against the Australian retail pricing of the custom GIGABYTE GeForce RTX 3090 Ti GAMING OC which costs AUD $3339 at Scorptec... which means we should expect similar pricing of AMD's new flagship Radeon RX 6950 XT as we see around the world for NVIDIA's new suped-up GeForce RTX 3090 Ti graphics card.