Respawn is currently hiring for three teams: Star Wars, Apex Legends, and an incubation team for a new project. It's possible this new project is another Star Wars game.

While scouting Respawn Entertainment's careers page I noticed something quite interesting. Two of the job listings for the New Game Incubation Team mention the Star Wars team. Does this mean Respawn is working on two Star Wars games at once--Jedi Fallen Order 2 and some other project? 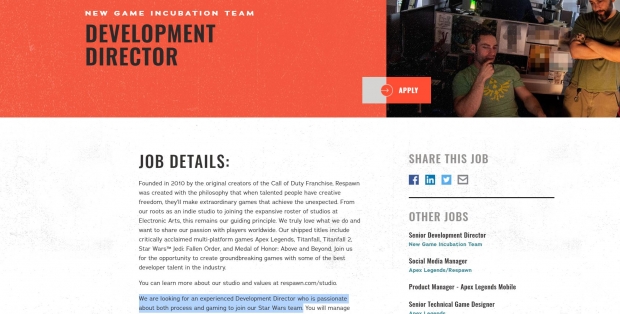 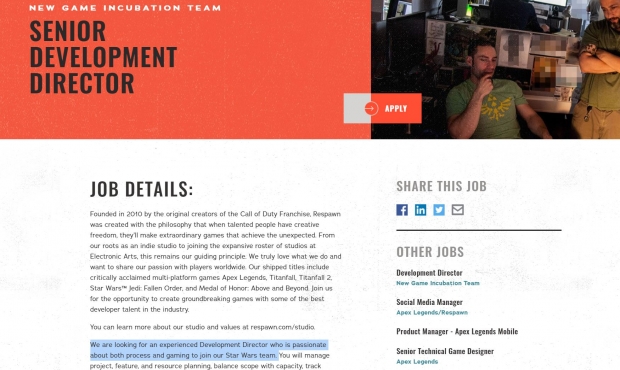 In fact, one of the listings outright mentions Respawn is working on a new IP. We've known about Respawn's new IP for a while now and a now-filled job opening hints the new project will be a live game.

No one knows exactly what Respawn is up to, but it's also worth mentioning the careers section is somewhat inconsistent in its formatting, so I'm guessing this is just an error.

Then again, EA did confirm it is working on multiple new Star Wars games and it's an open secret that Jedi Fallen Order 2 is one of those projects. It's possible Respawn is contributing to another game.

Check below for mentions of Respawn's new projects lifted from applicable job listings:

"We're looking for a highly skilled Lead Systems Designer to join our team working on the early stages of a new project. You will work with creative direction and the Game Director to develop the vision of the game systems (economy, progression, etc.) from the early stages. You understand how game systems fit together, how they can make a game engaging, and how they can empower players," reads the Lead Systems Designer listing.